Posted By: The Conversationon: June 30, 2017In: Digital
Print Email 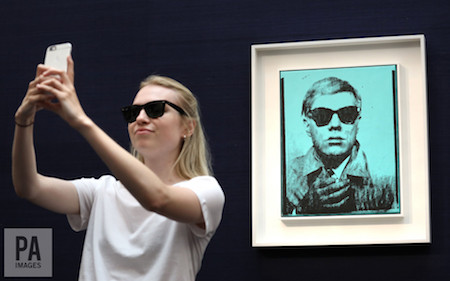 One day in 1963, Andy Warhol walked into a New York photobooth and took what have become the world’s most famous selfies. One of these trailblazing self-portraits has just been sold at a Sotheby’s auction for just over £6m.

These selfies perfectly suited Warhol’s vision of the pop art era of the late 1950s and 1960s – they are quintessentially all-American, democratic and mechanical. Though photobooth pictures could not go viral like social media pictures can now, the use of a photobooth to make art was, in 1963, fiercely innovative and added to the aura of technical invention that surrounded Warhol, just like it surrounds selfies and social media now.

Selfies are the holy grail of social media: self-portraying photographs that are posted on a social networking site and tell stories that aim to engage large numbers of people. Our latest research has revealed three things that can help you to take pictures that are worth – if not millions of pounds – at least a thousand words, and without you having to risk your life for them.

Our team conducted three experiments online with workers from Amazon Mechanical Turk which crowdsources expertise in a range of fields, one with students on computers in our university laboratory, and one corpus analysis – a method of looking at a body of evidence collectively – with independent coders. To determine exactly what people engage with when they look at pictures online, we showed participants different images. They rated these pictures on a number of photographic elements: point of view, content, “artsiness” and the like. They also indicated how likely they were to comment on the pictures if they saw them on social media.

These studies made it possible to isolate the things that cause people to stop caring about an online image – and to find pictures that engage them. Not only that, but they also helped to determine the sort of pictures on which people are most likely to comment. So here are three things that enthusiastic selfie-portrait artists need to know.

1. People prefer you in front of the camera

Point of view (POV) in photography is a question of who it is people “see” taking the picture. The simple distinction is that of “person” – of which there are two principle kinds: third person (Warhol taking a picture of Marilyn Monroe, for example) and first person (Warhol’s selfie). In Warhol’s time, most photographs were taken from a third person point of view. But this has changed – our research does not find much enthusiasm for third person pictures in the social media age.

Point of view contributes richly to how people feel and think as they look at a picture. Just as the point of view can be from someone within or outside of the picture, so people pick up different feelings and thoughts. Warhol plays a greater part in the pictured story of his selfie than in his famous picture of Marilyn Monroe. Just as Warhol is more involved in the story he is telling with his selfie, so are other people statistically more likely to engage with the content of selfies.

2. People get bored of just you

Ever since the portrait was first invented, painters and photographers have tended to give priority of importance to person or action. Most people’s selfies are all about themselves – but our research suggests this is a poor strategy for attracting attention, as people are 15.14% more likely to comment on selfies of people doing something meaningful than on “just” selfies.

Selfie-takers have agency beyond just being the subject of their own pictures: they do things such as eating a bread roll, drinking from a bottle, waving their free hand. Warhol does something else, too – he appears to adjust his tie. Conversely, as Warhol does that, he necessarily reveals who he is: an icon of the golden era of pop art and the ultimate arbiter of celebrity glamour. By his action, other people come to know him better. They can like or dislike, react or respond to his picture. But he has captured their attention.

Warhol’s selfie was designed not to portray or expose truth, but instead to acknowledge the artifice and deception inherent to any form of representation. If the creative leeway between reality and picture was wide in Warhol’s photograph, it is enormous since photography entered social media. This is necessarily the case. Photographers who complain that selfies are poor representations of reality, miss the fact that taking selfies is not representation in anything but the loosest sense. In fact, our research shows that not altering pictures can wind up in failure.

An adaptation can be serious or silly, amateurish or professional, and so on. Contemporary photographers should deploy the full power of techniques, such as emojis, filters, lenses – and tools such as “selfie sticks” to turn the original into something artful. Those selfies are superior in terms of engagement. We found that people are 11.86% more likely to comment on adapted selfies.

As people become increasingly sophisticated in their choice of pictures, it pays to become more people-centric and to think harder about the value a picture offers the audience rather than just yourself. The result will be a transformed selfie of you doing something – a picture that is worth a thousand words. Warhol wrote in 1968 that, “In the future everyone will be world famous for 15 minutes.”

That future is now.