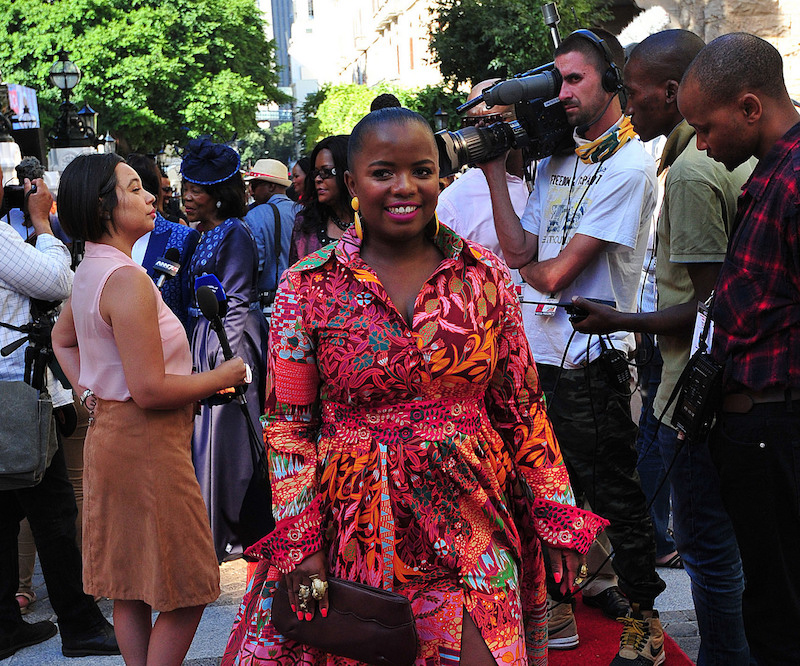 Phumzile van Damme arrives ahead of the 2018 State of the Nation Address at the National Assembly, Cape Town. [Photo: GCIS]

“Parliament has worked extremely hard to steer the Department of Communications and its entities, and in particular the SABC, to calm waters, we cannot allow actions that to be undone by a minister who has demonstrated utter failure at managing a government department,” said Van Damme.

Van Damme’s criticism of the appointment follows that of Thembi Godi, chairperson of Parliament’s Standing Committee on Public Accounts (Scopa). Co-incidentally, Godi yesterday convened a meeting with department of water and sanitation officials in Parliament to address financial irregularities related to water infrastructure projects while Mokonyane was minister. Godi told officials their (former) political principal “did not deserve reappointment”.

Godi said the department was “effectively destroyed” under Mokonyane and added, “The SABC is slowly emerging from a crisis. Is it going to be plunged into a crisis again? I think these are fair questions to be asked.”

Van Damme said in statement that the DA was in “full agreement” with Godi. “If he intends to keep his promise to South Africa of a ‘New Dawn’ President Cyril Ramaphosa will immediately reverse the appointment of Nomvula Mokonyane as minister of communications,” she said.

Van Damme also challenged and encouraged the portfolio committee on communications to voice their objections to her appointment. “The committee can count on the DA’s support in taking a stand against Mokonyane,” said Van Damme.

Van Damme said Mokonyane had been implicated in “a host of corruption and mismanagement scandals” including, “Allegedly being in cahoots with Reggie Nkabinde, the national treasurer of the ANC Youth League, to use Mabala Noise, his record label, as a front to launder millions received in tenders from Mokonyane’s department”.

Van Damme pointed out that during her tenure as Gauteng premier, Mokonyane spent over R3.25 million on her official resident “including R2.70 million on refurbishment of the main bedroom, en-suite bath room, kitchen, laundry, dressing room closet, curtains and bedding, and furniture. A further R570 000 was spent on fixing the swimming pool”.

ICASA, the SABC and the MDDA are all in deep in crises, said Van Damme, which meant the department of communications “requires decisive leadership, and Mokonyane is simply not it”.