How Game of Thrones’ Emmy-award-winning battle scene was made 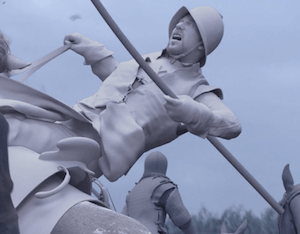 Melbourne based visual effects provider Iloura – also known for creating ghosts for the 2016 reboot of Ghostbusters – has won its first Emmy for the Game Of Thrones (GoT) season six episode ‘Battle of the Bastards’.

Iloura’s first time working on GoT was on the biggest, most spectacular episode the series has attempted to date. Its work on Battle of the Bastards is astonishing in both its scope and flawless realisation. The 22 minutes of the eponymous battle are gritty and visceral, giving the viewer a real sense of the chaos of men and horses fighting in the mud.

The battle is a showdown between Jon Snow (Kit Harington) and Ramsay Bolton (Iwan Rheon) over control of the North. Many of the narrative threads of the last six seasons were bought together in a single high-impact collision, and it required a mammoth effort to pull it off.

Iloura worked for eight months with 120 people to create a battle that combined 70 real horses, hundreds of extras and computer-generated images. Precise planning was required to keep the entire production on the same page, from meticulously plotting action sequences, to keeping track of what kind of light was used on-set. Visual Effects Supervisor Glenn Melenhorst told me,

Thrones is very tightly controlled from a creative perspective. The sequence was all in the preplanning, necessarily so as there were so many stunts and horses charging about on set.

Sequences like Battle of the Bastards require just about every trick in the VFX book. Actors and stunt performers are filmed on location or against a greenscreen but must then be integrated into a scene with CG characters, props and other elements.

Animation staff are often broken into teams, with some working on detailed character animation while others deal with effects animation such as smoke and fire. The various elements are combined into a composite image by specialists called compositers, who adjust each element to ensure the finished image looks like a complete whole rather than a patchwork of bits.

For GoT, Iloura used software called Massive, pioneered by Peter Jackson’s VFX company. Massive allows for simulations of large crowds, with each individual character moving and interacting with their environment according to a predetermined set of possible actions.

This was really one of those ‘how the hell are we going to do that?’ type of jobs. Everything was hard, particularly as we had to generate totally photo-real humans and horses acting in close-up as well as simulate and animate thousand-strong armies in wide shots. It was all terribly unforgiving work…

Iloura had to build every element in the battle, with the exception of the castle Winterfell, which had already been created – and a raven that had appeared in an earlier episode.

Virtual actors didn’t just appear in the sweeping overhead wide shots. The signature shot of the Battle of the Bastards shows Jon Snow, on foot fighting his way through a chaotic melee of charging horses and men, dodging spears and flights of arrows.

Actors are far too valuable to risk, so for one shot where Jon Snow leaps from his horse into the fray, Harington’s head was digitally composited onto a CG body. Once on the ground and apparently in the midst of battle, Harington had to dodge and parry imaginary targets, which were later added as CG elements. Still, Melenhorst stresses,

We used live elements and green screen bits and pieces as often as we could. My mantra has always been to use live action as often as possible. Nothing beats reality.

To build a scene such as this takes time and incredible attention to detail. For maximum realism, virtual creatures are created from the inside out. First, a detailed skeleton is built and rigged to move with the same range of movement as a real horse. This is fitted with anatomically correct musculature that’s carefully crafted to stretch and deform accurately, then a skin that hugs the musculature is applied.

The skin moves and deforms realistically over the muscles as the creature is manipulated by an animator. The skin is textured, hair is applied in the places and at the density it should be, and the skin and hair are given colours and textures that react to virtual light sources just as the real thing would react to light on location.

Clothing, armour, saddles and tack also need to be added, which must not only be built to scale but also appropriately aged and marked to appear well worn, with increasing layers of mud and muck added to all the CG assets as the fight rages on.

Hair and bits of hanging cloth and leather are given physical properties that allow them to swing and react naturally according to the laws of physics – but these elements also need to be manually controllable to allow animators to control the aesthetics of a shot.

A television program, unlike most feature films, usually has an established visual style that must be replicated. Iloura had to ensure their completed shots matched the established look of the show. The effects were so successful that, according to Melenhorst,

The producers of the show began to have to check the original plates to work out what was CG and what was not.

Watch a breakdown of the entire battle here:

Iloura are currently working on Underworld: Blood Wars, due for release in 2017 plus the television series Outcast (2016).

Peter Allen, Lecturer in Film and Television, Victorian College of the Arts, University of Melbourne