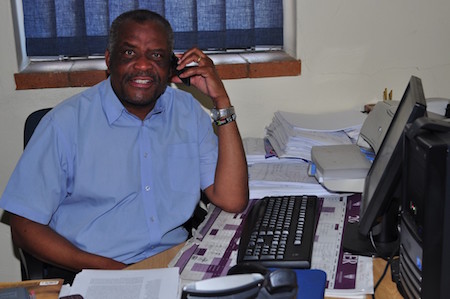 South Africa, under the auspices of the Sol Plaatje Institute for Media Leadership at Rhodes University, is hosting the 2018 World Media Economics and Management Conference (WMEMC).

Francia Mdlongwa, head of the Sol Plaatje Institute (SPI), believes the WMEMC is a vital platform where the massive issues confronting media businesses today will be discussed.

“My message to media owners, media leaders and media and journalism scholars who have yet to make up their minds on attending is simply this: Don’t let the future happen without your voice. You are a key stakeholder in ensuring the survival of both the media business and journalism’s social, economic and political role and place in providing audiences with high quality and credible journalism that you cannot be a ‘silent’ bystander. The 2018 WMEMC will be defining that future,” he says.

Mdlongwa says the SPI decided to bid to host the conference on the back of their successful hosting of the annual Africa Media Leadership Conference, in a different African country each year, between 2002 and 2010. This experience gave them the edge over rival bidders, he says. “The AMLC, supported by Germany’s Konrad Adenauer Stiftung and focusing on challenges faced by media organizations in Africa, also involved intense preparatory work and ensuring that you can literally use ‘remote control’ logistics to host a conference in a far-flung country,” he explains. The WMEMC will be held at the Lagoon Beach Hotel from 6 – 9 May 2018.

Mdlongwa says the SPI’s disciplinary knowledge and expertise also came into play. “The SPI was the first university institution in Africa to start media management education and training when the Institute opened in 2002. Its well-known postgraduate programme, which combines rigorous theoretical and practical grounding in media management and has produced some top media leaders who are today in influential media positions in Africa and internationally, plus the basket of its varied and targeted professional short courses for Africa’s practicing media managers, distinguishes the SPI from competitors,” he says.

Mdlongwa says the conference will take a bold and fresh look at emerging threats and opportunities to the sustainability of mainstream media, which he calls “a critical lever that underpins democracy”, in an era where a few global technological platforms have come to the fore. He says these platforms, using their scale and enormous financial resources, are trying to take over the gathering, value-addition and dissemination of news content to both local and global audiences.

“The summit will therefore examine whether mainstream media needs to buttress its survival through collaboration with the Googles, Facebooks, Apples and Amazons of our time or to adopt a twin strategy of simultaneously collaborating and competing with the technological giants on various aspects of the media business and journalism,” he says.

“Anyone who values and cherishes the existence of an independent and free media – notwithstanding the media’s editorial independence challenges because of a variety of competing interests – will want to attend the summit. They will want to hear first-hand the empirical evidence that the world’s leading scholars and researchers of media business from across the globe have to say about the future of an industry which shapes public discourse and how we are governed; who will shape this discourse and in what form in the coming years; and whether or not the ‘new brave world’ of the twenty-first century will accept a few platforms, a new monopoly, to virtually run and control their lives.”

The WMEMC will bring together a global gathering of the world’s leading scholars of media business and media management under one roof for the very first time in Africa since the founding of the WMEMC nearly 30 years ago to debate and share their insights and research evidence on how to secure a future for media firms and on how to save quality and credible journalism in the ‘platform economy’, says Mdlongwa.

“This is a rare opportunity for South African – indeed African – journalists, media leaders and media and journalism scholars to be in the front line of history-making for a better-informed and more just world,” he says. “The lessons gleaned from this conference should be important to anyone who has an interest in media and journalism, both of which are under siege from a variety of factors, including the heightening fake news of the ‘post-truth’ era that is based on ‘alternative facts’.”