LATEST NEWS
Home Press Newspapers Is local news on the cusp of a renaissance?

Is local news on the cusp of a renaissance? 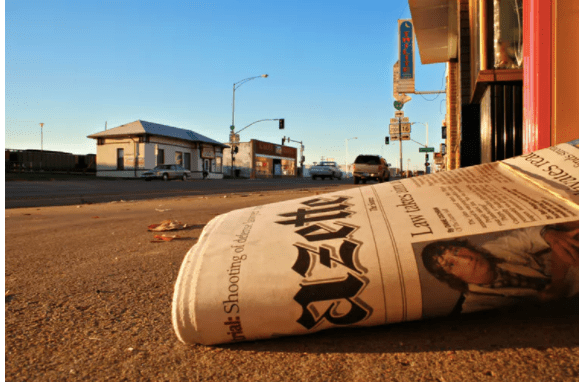 It’s not an easy time to be a journalist in the United States. Since 2000, nearly half of newsroom jobs – more than 20 000 of them – have disappeared.

Rubbing salt into the wounds, CareerCast named “newspaper reporter” the worst of 200 jobs in 2016 for the third successive year. (Pest control worker and meter reader came in at 195 and 190, respectively.) And it doesn’t help that the profession now finds itself routinely targeted and criticized by the White House.

Given this negative backdrop, it’s not surprising that many journalists are driven by a strong sense of vocation. Yet now, more than ever, we rely on journalists to do the things they have always done: act as a check on those in power, create an informed citizenry and encourage civic engagement.

This is particularly true at a local level. Local journalism, the subject of my new report for the Agora Journalism Center at the University of Oregon, not only fulfills an important watchdog function, it also plays a pivotal role in helping create – and define – a sense of community.

Telling this story through the eyes of 10 local news outlets in the Pacific Northwest, I found editors and journalists eager to talk about their efforts to diversify revenues, harness new digital platforms and find fresh ways to engage with audiences.

Their experience serves as a microcosm for discussions and activities taking place in local newsrooms across the country every day.

What if they were to disappear?

To understand the importance of local journalism, one need only look at areas where strong local reporting has disappeared.

The emergence of media deserts – communities devoid of ‘fresh’ news and information – risks creating an environment where citizens miss important information and public officials are potentially less accountable than they should be.

One prominent example of this took place in Bell, California, where a Pulitzer Prize-winning investigation by the LA Times revealed that some of the town’s top officials were paid double or triple the salaries of their counterparts elsewhere. The story triggered a criminal case, which led to jail time for several public officials.

Because “no one was actively looking for corruption or fraud there,” the Center for the Advancement of Public Integrity at Columbia Law School concluded, “it took a newspaper investigation to draw law enforcement scrutiny.”

That this investigation was conducted by the LA Times, rather than a local paper, is partly because the city’s paper was no longer around.

“A lot of residents tried to get the media’s attention, but it was impossible,” said Christina Garcia, a local community activist and teacher (reported in the FCC’s mammoth 2011 report on the Information Needs of Communities). “The city of Bell doesn’t even have a local paper; no local media of any sort.”

As local newspapers continue to shutter, and further newsroom jobs are shed, the risk of “more Bells” is very real.

Mark Zusman, editor and publisher of Willamette Week (Portland, Oregon), told me that trends point to “an environment in which the potential for corruption and misdeeds has never been greater, because of the lack of watchdogs on a local level, not on a national or a federal level.”

Getting creative about revenue

To do their job, however, journalism needs to be on a firmer financial footing.

“You cannot have an artistic success without a financial one,” John Costa, president and publisher of the Bend Bulletin (Oregon), said in an interview for the report. “But the purpose of that business model is to make sure that you’re doing high-quality content because you have to collect readers or viewers in our business to stay vital.”

For all news providers, refining their business and revenue model is arguably their biggest challenge.

As traditional advertising dollars have flowed online, they’ve typically migrated to organisations like Google, Craigslist, Yelp and Facebook, rather than the digital portfolios of newspaper groups.

The news providers in the Pacific Northwest that I spoke to realise they must find new revenue streams, and many of them are going about doing just that.

For example, the Register Guard in Eugene (Oregon) has set up a spinoff company, R-G Media, to produce websites, apps and digital content for commercial clients. Outlets such as Portland’s Willamette Week and Seattle’s GeekWire are hosting and producing events as a way to engage with their readers and generate money through ticket sales and sponsorships.

Meanwhile, membership programmes – historically the preserve of local PBS and NPR stations – may work for other outlets too.

“I think one of the main ingredients of our secret sauce, if you will, is pledge drives,” said Morgan Holm, senior vice president and chief content officer at Oregon Public Broadcasting. “It forces you to articulate on a regular basis to your audience what you do for them and why it’s of value to them.”

Pledge drives and events aren’t just potential revenue sources. They’re also a great way to find stories and engage with your community. In an era of “Fake News,” this matters: Journalists need to be more visible and more accountable, showing that they’re listening to their readers.

Caitlyn May, editor of the Cottage Grove Sentinel (Oregon), hosts a weekly, informal, ‘Meet the Editor’ discussion at a local coffee shop. She also appears on a monthly radio show (streamed via Facebook Live) and takes questions from listeners.

Elsewhere, radio stations, such as KUOW Public Radio in Puget Sound (Washington) have been embracing some of the tools created by the news startup Hearken, encouraging readers to submit questions they want answered or suggest topics they want covered.

This represents a shift for many journalists. In the past, many would engage with the community at an arm’s length, lest it appear to taint their objectivity.

But in the digital age, journalists can – and, indeed, are expected to – interact with audiences, and this doesn’t just mean responding to online comments or engaging with followers on Twitter. Attending events, appearing on Facebook Live or producing podcasts are all ways for journalists to break down traditional barriers with readers.

Being relentlessly local may hold the key

These types of interactions will be essential if news providers hope to reassert their relevance and build audiences that are willing to pay for their products.

In this regard, local journalists potentially hold several advantages: they intimately know their audience and usually live within the community, characteristics national outlets cannot compete with.

For local outlets, these foundations could offer a path to financially sustainability.

Journalists also need to embrace the fact that the future of journalism cannot – and will not – look like the past. Moving forward will require doing some things differently.

That means being open to new forms of storytelling like video and augmented reality, finding new ways to engage with your audience – online and in the real world – as well as a willingness to embrace concepts such as Solutions Journalism, an approach to coverage that journalists haven’t historically embraced: reporting on what’s working as rigorously and relentlessly as what doesn’t.

Although the journalism industry continues to face many challenges, there are causes for optimism. Newsrooms in the Pacific Northwest and the rest of the country are experimenting with new revenue, reporting and engagement strategies.

To get some sense of this, check out the experiments in 360 video and augmented reality being produced by the Herald and News in Klamath Falls (Oregon), this heartwarming video from the Statesman Journal (Oregon) or the podcast of the Columbian (Vancouver, Washington).

There’s no exact recipe for success, but these signs suggest an industry in the process of reinventing and reinvigorating itself.