Call to Care: Reporting on What Counts 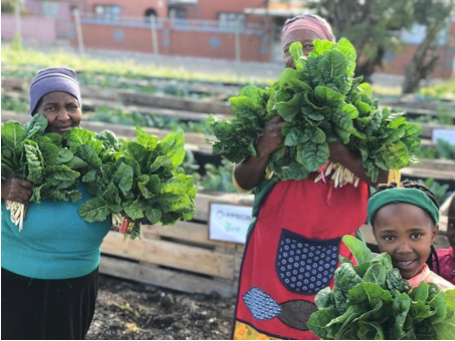 Photos: Grannies in Gugulethu harvest and sell their own spinach/Alexandrnya Audagnotti of Call 2 Care

Some six years ago, Capetonian Alexandrnya Audagnotti decided that she wanted to do something more meaningful with her life; to help make a difference in the world.

The events planner resigned from her job, and with her partner’s help, started small around Heritage Day in 2013. “A humble beginning where friends would get together to do soup kitchens or plant gardens,” says Alex. Numerous sacrifices, attempted hijackings and long hours later, Alex realised her dream. Call 2 Care was born.

Today, the fully-fledged and self-sustaining non-profit organisation leads a bold initiative called the iGardi Project, which, through volunteer work from companies and sponsors, teaches impoverished communities to build and grow their own vegetable gardens.

The iGardi Project is bearing fruit (ahem) in various parts of Cape Town each month. In Gugulethu, for example, a group of elderly women recently harvested and sold their own spinach. And at Charleston Hill Secondary School in Paarl, pupils have been taught how to construct plant boxes and dig compost heaps, all in the name of local sustainable development.

Earlier this year, President Cyril Ramphosa promised in his State of the Nation Address to eradicate child hunger in the next decade. Call 2 Care is leading this charge, but its story isn’t making news headlines. Why is that?

Call 2 Care’s story may not grab the coverage it deserves, perhaps because it falls under the broad category of journalism called development reporting. In his foreword for this African reporters’ handbook, Joseph Warungu writes that; “development journalism has often been labelled as boring, too positive and abstract, far removed from the popular journalistic mantra (that) ‘if it bleeds it leads’.” And he’s right.

The facts speak for themselves. The Encyclopedia of Earth estimates that; “in most African countries, agriculture supports the survival and well-being of up to 70 per cent of the population. For many, their livelihoods are directly affected by environmental changes, both sudden and gradual, which impact on agricultural productivity.”

Cape Town is no exception. The city is recovering from its worst drought in a century (blame climate change), and parts of the Western Cape still suffer, while rising food and fuel costs make it more challenging for the average South African to get by.

Local farmers face unprecedented times, and their ability to bounce back from the drought’s effects will take time.

With the growing odds stacked against farmers, the government, people like Alex and her humble NGO Call 2 Care, there is a solution. Researchers believe agroecology is the future of agriculture as we know it. Agroecology aims to create “stable, sustainable, resilient and productive farms” without pollution like leached fertilisers, ammonia and antibiotics, which are “more common in industrial agriculture”. A paper published by the Third World Network warns that “the global food production system is broken as we are destroying the very base of agriculture with unsustainable practices.”

Africa, however, happens to find itself naturally at the forefront of agroecology. Oakland Institute Researcher, Frederic Mousseau writes that; “millions of African farmers don’t need to adapt to climate change. They have done that already.” Mousseau’s found that agroecological practices have empowered Kenya’s 200 000 farmers to “grow the most food on the least land and with the least water” while halving their use of fertilizers.

Meanwhile, back in Cape Town, the metro’s “breadbasket” the Philippi Horticultural Area has been a direct source of employment and food for impoverished communities on the urban fringe, while fending off threats from developers.

The African Centre for Biosafety points out that while most Philippi farmers still use chemicals, “there are new groups of farmers that are excited to implement environmentally sound practices”. Seeds of agroecology have been planted in the Philippi Horticultural Area, with one farm now “introducing crop rotation to build healthy soils and a diversity of crops and indigenous plants to support biodiversity”.

In the meantime, Alex and her team of passionate volunteers journey into more areas of the Western Cape. So far, they’ve brought their iGardi Project to 13 communities, planting some 173 garden boxes. Alex calculates that each vegetable bed can feed up to five children a day, or “subsidise nutrition for up to 15 children daily.”

On agroecology, Alex says “when finances are limited, it makes sense to grow one’s own food and to create an income from the surplus. Once equipped with the resources, skills and know-how, it becomes second nature.”

Mr Ramaphosa are you listening?

I think we’ve found the answer.