WATCH: Al Jazeera on Zuma, the Guptas and the media 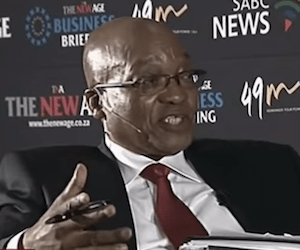 Television network, Al Jazeera, in the second part of a Listening Post story on transformation of South Africa’s news media, has taken a look at President Jacob Zuma and the government’s relationship with the media.

Journalist Nick Muirhead canvassed the views of a number of South African media personalities from Sunday Times reporter, Qaanitah Hunter to The Citizen editor, Steven Motale, and author, John Mattison. The story investigates the relationship Zuma has with The New Age, the SABC and more recently, Independent Media.

“Zuma’s a big story in South Africa and a divisive figure. These are tense times in South Africa under the Zuma presidency – race relations are still fraught, corruption is rife and the local elections that are just around the corner will be a test of the ruling African National Congress party’s appeal – which shows signs of waning. For the President, now more than ever, controlling the message is essential,” the presenter says in the introduction.

“From the controversial $20m upgrade of his private homestead, to the state of the South African economy under his watch. Then there’s Zuma’s cosy relationship with an influential business family, the Guptas, who own media outlets. Gupta-owned outlets are among the few that support President Zuma, along with to the state-owned South African Broadcasting Corporation, the SABC. There’s also the Independent Media group which – critics say – after a government backed takeover, doesn’t necessarily report favourably on the President so much as it goes after the main opposition group, the Democratic Alliance.”

It also discusses the “state capture” of the SABC, noting how the public broadcaster tightens controls ahead of elections, already pulling Vuyo Mvoko’s popular new show, On the Record, for wanting to discuss state capture!