There’s more to airline magazines than just winging it 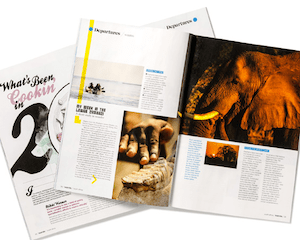 Most of us will have flicked idly through airline magazines in those listless few minutes between takeoff and taking out laptops, or the arrival of food and drink.

Sometimes a few minutes is enough: airline magazines vary vastly in quality, ranging from the intentionally quirky to the buttoned-down and staid. Like all genres of magazine, they go through redesigns and relaunches.

Those that enjoy enduring success and reader affinity are the ones that know their readers’ interests well, and which present content in an attractive and engaging manner.

British Airways’ Highlife magazine, for example, has a proven model for entertaining and informing, and its South African edition, titled Highlife SA enjoys the same success, with its 50th edition appearing next month.

The magazine’s success is due to a canny mix of local and international content.

Highlife SA continues to bring together noteworthy contributors and photographers, but with a distinctly African flavour and attitude, he says.

It’s not a hit-and-miss approach. Airline magazines must consistently reflect the identity of the airlines and have an important role in building long-term, authentic relationships with customers. The South African edition of Highlife builds on the magazine’s 40-year legacy of entertaining and informing, with an eclectic cocktail of world-class content.

The magazine’s publishers, Cedar Communications, are keenly aware that Highlife magazine is seen by more than three million people a year, who spend an average of 36 minutes reading it.

Readers say the magazine makes them feel more positive towards the British Airways brand, with 32% adding that it improves their opinion of BA, and 39% telling others about the articles, passing on the magazine, or recommending the airline.

Similarly positive feedback has been received about Highlife SA, with 80% of travellers on British Airways (operated by Comair) saying they read the magazine, 76% rating it “a good to very good read” and 37% reading it for more than 30 minutes.

Available across the Comair fleet, roughly 50% of the editorial celebrates Southern Africa and the continent as a whole. The SA version comprises 52 pages of local content and local advertising, while the rest is a selection from the global issue. Highlife SA was the first hybrid version of the brand and recently BA added the Mandarin version based on this successful model.

The magazine carries a monthly column by veteran foreign correspondent and BBC world affairs editor, John Simpson, plus the popular Ask The Pilot feature, which polls pilots on their favourite travel destinations or experiences.

Recent features include AfrikaBurn’s ‘wild whirl of wonder’, Harare’s cultural hub, the many attractions of Mozambique, the course of the Zambezi River, South Africa’s burgeoning art scene and Afro-pop stars Mafikizolo on their fondest memories of touring, performing and dining in Africa.

In the international section, there’s a look at the 12 actors who performed Shakespeare’s Hamlet in every country of the world to commemorate the 400th anniversary of the Bard’s death. There’s also an interview with a human cannonball, riding ‘fat bikes’ in the Antarctic and revisiting the once-notoriously violent Costa Rican city of San José.

Shaun Pozyn is head of marketing for British Airways in Southern Africa. Highlife SA is published in South Africa by Cedar SA