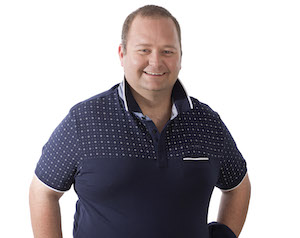 His family and the team at Algoa FM are shocked and devastated. “We have been in contact with the family and have extended our deepest sympathies,” said Algoa FM operations director, Alfie Jay. “Our staff have been in tears all morning and it will be a difficult day in radio land. Graham’s passion and his memory will live on in our hearts forever”.

Roberts joined Algoa FM as a presenter in September 2011 and has been producing the Jeff Moloi show since November 2015.

His passion for radio started at an early age and according to his mother, he imitated radio presenters he listened to since primary school. He spent some time working for Daron Mann in East London before joining a Port Elizabeth based community radio station, where he filled numerous roles including music compiler, production manager and afternoon drive show presenter.

Moloi, who worked very closely with Roberts over the past while is shattered and had the following to say about his dear friend and colleague: “Alfie Jay introduced me to Graham Roberts just before I started working at Algoa FM. It was important that we met since we were going to work on the show together. He had an infectious smile, we enjoyed a beer or two, and we clicked from that evening.

“Graham loved his music and was a passionate Roxette fan. He knew basically every pop/rock song produced over the past 50 years and had inside information about more than half of those tracks. Graham’s passion for music came through in everything he spoke about. He was always the first to find out about the death of world-renowned musicians, including the likes of Black (Colin Vearncombe) and Prince.

“Now my mate has joined all of them. I guess they need a DJ to play their music up above. Rock on buddy, they’re not ready in heaven for what’s going to hit them. Utterly devastated. I’m going to miss you my mate, every evening.”