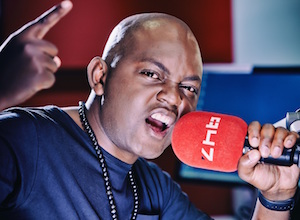 Euphonik has signed up with 947 to deliver a new show, eUNITE with Euphonik, on Sunday nights in what the station describes as a “total sound takeover” of its weekend lineup. The top house DJ will also kickstart the weekend with a mix on the Afternoon Drive with Anele Mdoda just after 18h00 each Friday. The show starts this Sunday, 18 September, between 18h00-20h00.

“Euphonik has built a powerful brand with an urban energy, and as the station that is plugged into Joburg, we’re very excited to work with someone who is so directly tapped into the parties in the city,” said 947 station manager, Ravi Naidoo in a press release. “We are thrilled to welcome Euphonik, and a new audience to Sunday evenings on 947.”

Rumours that Euphonik was parting ways with 5FM made news earlier this month. He has been on the air for the last decade, initially at YFM and later joining 5FM. As an artist he has produced numerous albums and has been nominated for, and won, a number of awards for his work.

During this time, Euphonik expanded his brand globally, jetting between major party cities  – from New York to Miami and Ibiza – drawing packed crowds and sold-out shows while sharing stages with some of the top players in the business, including Tiesto, Skrillex, Avicii and Swedish House Mafia.

With expansion in mind, the decision to partner with a fresh, contemporary radio platform such as 94.7 came naturally to Euphonik.

Along with his hit Don’t Wanna Be Your Friend (the most down-loaded song of the year so far), Euphonik has also just released a new hit, It’s A Fine Day, already number 4 on iTunes and Top 20 of Shazaam just under a week after release. 947 is a curator on Apple Music so fans who love the radio mix will be able to stream it shortly after the show.

In addition to welcoming Euphonik to the team, the station has re-jigged other elements of its weekend programming schedule to fuel the parties and pace of Joburg.

The Bloc Party with Sizwe Dhlomo and Mac G on Friday and Saturday nights welcomes mixes from some of the city’s hottest resident DJs including Saubomb, Da Capo, Dino Bravo and Franky.

Miss Candy K, meanwhile, joins the team from Voice of Wits and will host the 04h00 to 07h00 show on Sunday mornings.