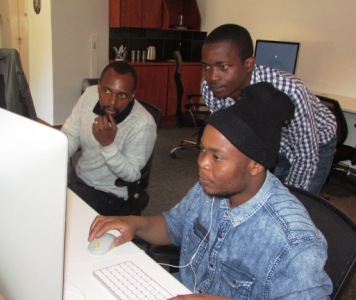 Media agency Ebony+Ivory’s Hlumani Empowerment Trust has a plan. Paul Middleton, managing director of Ebony+Ivory (E+I), says its aim is “to give emerging people a leg up and true empowerment, because I’ve gone through all the models and they didn’t work … At the end of the day I just wanted something that would grow the industry”. In the works for the past three years, the Trust was formally registered in October 2016 and received its first participants in April this year.

The Trust helps beneficiaries in two ways; firstly through the previously disadvantaged people who work for E+I, and who generate business and the wealth for the company every day, and secondly via seven entrepreneurs who participate in the programme. The former hold 25.2% ownership of the Trust and get a percentage in revenue back from it, while the latter receive support for their business and skills development. “The intention is for each person to grow and get a leg up, saving on costs every year, and then go out and employ some more people or get more business,” Middleton explains.

Middleton reckons “finding true entrepreneurs is a mission”. Many people were scared off because the Trust is not a paying opportunity and may have found the application process daunting, even though in reality it is not. Those participating in the Trust receive the backing of E+I and its prominent position in the industry, affiliated with all the industry bodies, and the reputation that comes with it. They also receive business skills training and assistance with putting together business plans and tender proposals.

Not only do the entrepreneurs benefit from being part of the Trust, but so too does Ebony+Ivory. The agency is able to call on the entrepreneurs as service providers, though this is not expected. One of the participants, videographer Molebogeng Angoma AKA Mol, was given an R80 000 assignment for 20 commercials for one of the agency’s clients, in his first week as part of the Trust.

Hearing from the entrepreneurs

Creative composer Thantaswa Matshobongwana is one of the entrepreneurs taking advantage of the Trust. She was looking for more stable, permanent employment and hence applied for the Trust. “I’ve got space here, and there’s data which is something people struggle with”, she says describing its advantages. Networking and the opportunity to collaborate is another advantage for the entrepreneurs, something Matshobongwana has done with one of her peers.

Asked why he put his name forward for the Trust Mol, who is trained in screenwriting and directing, said he was looking for an incubator hub so that he could pick up entrepreneurial skills and potential new clients. The Trust has delivered on this mandate. Mol has picked up new clients, been mentored, had had the chance to network and benefited from the education slots offered. Having founded his own company video production company, Pix Play, just under two years ago, Mol says E+I put a lot of trust in him when they handed him work in his first week as part of the Trust, and he is grateful for that. “I want to make a feature film … In five years I would like Pix Play internationally to be recognised as a quality video production company and have a few international and local awards under our belt,” he says of his next ambitious goal.

Khuzwayo, who hails from Durban, says after he finished studying, he decided to start his own business which designed posters for events, did logos, and registered people’s companies for them. After moving to Johannesburg he morphed this business into The Plug Creative Agency.

“My business was doing well, but not that great,” he explains. “I knew people and I knew how to open doors, speak to clients and get gigs, but it wasn’t really proper”. This was why he decided to apply for the Trust. “I didn’t understand the concept of business and I certainly didn’t understand the concept of an agency… I didn’t know how to manage funds and I didn’t know how to get proposals going. Here I learn how to manage my business and how to maintain and actually grow it”. He says he now treats his company like a real business, instead of seeing it as a freelancing gig.

Asked if there was another model like this in South African media, Middleton says he created something because he couldn’t find anything and “this felt right for me”. He adds that it is a work in progress that still has problems that need to be worked out. “The model is a good model but it certainly isn’t the Holy Grail, it certainly has faults and it certainly can be improved.”

Setting up the office space for the entrepreneurs cost Ebony+Ivory R500 000, which includes a workspace, Apple Macs connected to creative cloud, printing facilities, tea and coffee, a fully furnished kitchen, a boardroom, and a chill room.

There are spaces that still need to be filled in the Trust. If you are a young entrepreneur looking for assistance you can click here for more information and how to apply.

Here are some pictures of the office where the entrepreneurs create magic: