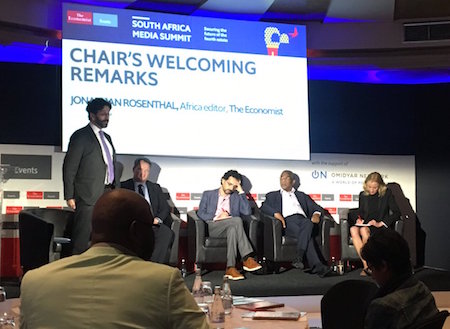 An overload of information in a very short space of time. That is the best way to describe the South African Media Summit, hosted by The Economist, which took place at the Michelangelo Hotel in Sandton recently.

The gathering kicked off with a panel discussion around the state of freedom of South African media. The panellists were Kevin Ritchie, regional executive editor, Gauteng for Independent Media; Moeletsi Mbeki, deputy chairman of the South African Institute of International Affairs; Yilva Rodney-Gumede, professor in the department of journalism, film and television at the University of Johannesburg; and Indra de Lanerolle, director of the Jamlab Journalism and Media Innovation Hub.

“We need to rewire the media landscape if it is to play that liberal role,” said De Lanerolle firing the opening salvo while Mbeki said, “Government interference in the SABC has very little impact on South African media as there’s other options”.

It was a shame that two of the initially advertised panellists, Peter Bruce and Iqbal Survé, were unable to make it. The Minister of Communications Ayanda Dlodlo was also supposed to be a part of the panel, but arrived late due to an accident on the highway. She was featured separately straight after in a one-on-one interview.

The most surprising element of the discussion was Dlodlo’s openness and honesty about the SABC, a refreshing change from her predecessor, Faith Muthambi. Dlodlo was clear that current problems at the public broadcaster were due to bad management. She said the first steps that needed to be taken to rectify the situation were finalising a permanent board and then filling the three vacant executive positions.

“We need to stabilise the labour relations in the SABC… I leave labour relations to the board,” she said. She also confirmed that if Hlaudi Motsoeneng were to return to the SABC, he would not do so as CEO or COO. The minister also praised media for the progress it has made in transformation: “The media sector has to be one of the most transformed… it has done very well,” she said.

Dlodlo was also challenged by questions from the audience with Wits University vice-chancellor Adam Habib enquiring whether an alternative governance model for the SABC could be implemented. Her response was that unfortunately people represent a party before the people and they bring in their own people with them. Three members of the SABC eight – Thandeka Gqubule, Busisiwe Ntuli and Krivani Pillay – were in attendance and questioned the minister about her role in sorting out the public broadcaster. One said, “The current model doesn’t serve the public broadcaster” while another questioned the minister’s involvement in operational matters. But Dlodlo insisted that when she was appointed, she made it clear she “didn’t want to be involved in operational issues”.

The impartiality of the media

Another panel discussion explored whether journalists can be unbiased in a time where often they are being funded by certain forces. The panellists who shared their views were Stefaans Brummer, co-founder of amaBhungane Centre; Ory Okolloh, director of investments at Omidyar Network; and Mondli Makhanya, editor in chief of City Press. Sam Mkokeli, chairperson of the media freedom sub-committee at SANEF was also supposed to take part but didn’t appear.

Here are the highlights of each of the panellists:

Brummer – “It’s about where you are prepared to go with your reporting… The media should be allowed to go everywhere… The problem is not enough media capacity.”

Okolloh – “There will continue to be a symbiosis between traditional and new media. It’s not either or… Are we as media speaking to the young people? We need to look at which platforms they use… We need to challenge ourselves to look at community stories and go deeper.”

Makhanya – “In the Zuma era the media has become more activist… Government has pulled advertising if you write a certain story, it has happened… A section of money needs to be set aside for public good… The public is talking to the media, we are not talking to the public.”

Who do South Africa’s media really speak for?

Is South African media still talking to and aiming at the elite, excluding a majority? That was the topic discussed by Dele Olojede, former publisher of Next; Ntando Makhubu, news editor of the Pretoria News; Jovial Rantao, Independent Media press ombudsman; and Thabo Leshilo, politics and society editor at The Conversation Africa.

Here are their key takeaways:

This discussion, like a previous one, came back to the notion of a public good as the role the media should fill. “Journalism needs to be a public good. And there has to be funding … MDDA needs to come in and government contributions,” Leshilo said passionately.

It isn’t a media discussion without talk of fake news

One of, if not the hottest topic in media at the momen,t is fake news. This was discussed in depth through a panel discussion at the summit. Ferial Haffajee, editor-at-large of Huffington Post SA; Khadija Patel, editor in chief of Mail & Guardian; Luke Mckend, chief executive of Google South Africa; and Emilar Gandhi, public policy manager for SADC at Facebook, shared their thoughts. Here are the highlights:

Haffajee – “Don’t fall into the Donald Trump trap of calling anything you don’t agree with fake news… We need a solution that is less hands off than we have seen up until now.”

Patel – “We need to work collaboratively with social media like Twitter and Facebook… A journalist in Zimbabwe pays for his proper investigative journalism with money from a fake news site he set up.”

Mckend – “Google has had to change its algorithms to devalue fake news… In the last year we removed 1.7 billion bad ads… We’re piloting in Europe a fact checking tag system… Scale is another problem regarding using human intervention to curb fake news.”

Gandhi – “We’re dealing with fake news from a product and policy perspective… Informing the community is an approach we are using… Many people believe what they see online is true… The conversation goes beyond fake news to the safety of journalists online. We are using machine learning to take down troublesome accounts.”

The conversation also turned to possible solutions to the fake news phenomenon, with formal online regulation being suggested. Gandhi responded, “Heavy regulation won’t curb fake news online as it is also occurring offline”. Patel added, “I’m not sure government regulation is the answer, but there has to be some regulation.” Haffajee believes, “Brilliant journalism and algorithm correspondence is the answer to fake news”.

The final part of the gathering was a two-person panel that explored two of the most innovative success stories in media. These are fact checking service Africa Check and inequality drone photography, Unequal Scenes. The panellists were Africa Check editor, Amin van Wyk, and Unequal Scenes founder, Johnny Miller.

Miller – “Drone technology has the power to change people’s perceptions… Drones are not an expensive tool, that is a misconception… You have to use a drone to tell infrastructure and inequality stories .. Drone photography is not a silver bullet, it’s part of storytelling with other resources.”

Van Wyk – “We use neutrality, the so what question and different topics to choose facts to check… Africa Check is non-profit, gets donations and crowdfunding and has a paid for fact checking service but with strict conditions.”

Here is a photo gallery of some pics from the event:

To see the live tweets that were posted during the event, follow Michael Bratt on Twitter @MichaelBratt8 and check out his timeline.