Fake news created by politicians and PRs, not the media 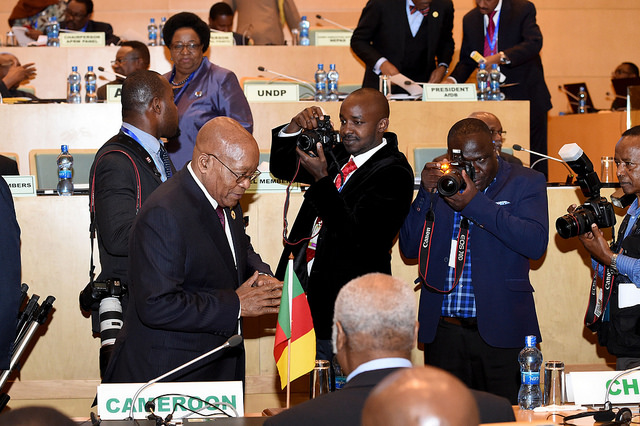 The rise and fall of Jacob Zuma has seen the value of the freedom of the press rise immeasurably. Not even the most ardent cynic can possibly dispute how important the media has been – and continues to be – in South Africa in bringing about the fall the corrupt.

And, in spite of what Donald Trump might say about the role of the media in the spreading of fake news, he is wrong. Very wrong.

Indeed, there might be the odd case of a journalist fiddling with the facts to suit his or her own prejudices, but this is miniscule in comparison to the volumes of fake news produced by politicians and public relations practitioners representing corporate interests.

While I have written about this before one way or another, something happened a few days ago that bears repeating in the context of fake news.

A spokesman for the ANC chided a journalist by saying, “Come and talk to us instead of spreading fake news”. To which the journalist responded with a question about whether Jacob Zuma would step down. The ANC spokesman, like so many other politicians and corporate PROs, fired back immediately: “I’m sorry, I can’t comment on that…”

And so its goes. Politicians and companies are always ready to talk to the media if the subject involved something positive. Anything else is generally met with a “No comment”.

And the more “no comments” there are, the more journalists have to rely on hearsay and conjecture. It’s not ideal by any stretch of the imagination but it is hard to blame journalists and editors for publishing hearsay and gossip rather than nothing at all.

What also happens, of course, is that political party insiders and corporate employees who don’t agree with what their bosses might decide often contact the media with what is nothing more than the fakest of fake news just to stir the pot of their own prejudice.

When political parties, governments and corporations do not embrace transparency and make their senior members available to the media, they encourage speculation. And speculation can become fake news.

Let’s look at how the South African media has speculated over the past few years of the destructive Zama tsunami.

With the exception of those few pro-Zuma media owners, the majority have spent years pointing out the shortcomings of the Zuma administration. They have repeatedly pointed out that he has been doing more damage than good. They have unearthed the scandals, followed the money and the paper trails, exposed state capture, deciphered the Gupta leaks…

They were dead right. In spite of the pro-Zuma media and indeed the ANC has denied, denied, and denied again – despite clear evidence of wrongdoing.

Frankly, I would love to see those newspaper particularly, that have been leading the anti-Zuma campaigns for so long, reprint all those so-called speculative and fake news items that have now proved to be true.

South Africa is indeed fortunate to have a free press. It’s not a perfect press. It never is, anywhere in the world.

But, in spite of the few imperfections, I reckon our media can take a bow for the role they played in finally getting the ANC and so many members of the pro-Zuma lobby to see the light.

And then they were there last night to watch as Jacob Zuma was forced to leave the Office of the President and resign, still spinning his version of the ‘truth’, that he was a constitutionalist devoted to South Africa, that he did nothing wrong and was being “victimised”. Now that is a fake news story nobody is buying…