How media companies are campaigning for Mandela Day 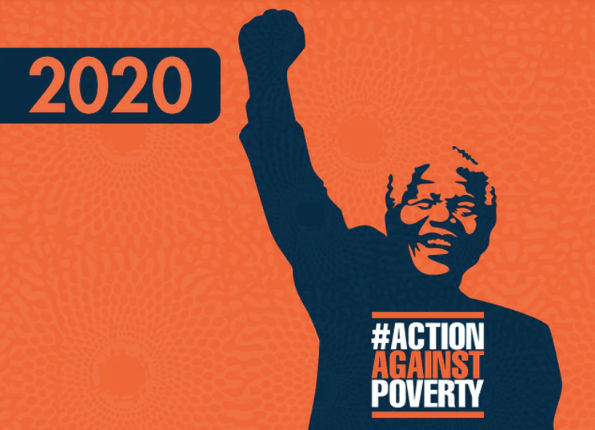 #GMAMandelaDay called on listeners and clients from all over South Africa, and further afield, to make donations towards this initiative via the donate button on the website, with each R67 making it possible to feed a family of four.

The response was overwhelming, with R572 538 raised in just two days since the initiative’s launch on 13 July. This was added to DJ Jazzy D’s total of R85 000 and topped up by Jacaranda FM’s Good Morning Angels to leave a grand total of R670 000, or 40 000 meals for South Africans in need!

Maize meal for Jazzy D’s project, #Feed67000In1Day, was donated by Keystone Milling Co., so the additional funds raised by #GMAMandelaDay will be used to add meat and vegetables to the recipe for a healthy, balanced meal.

Jazzy D, who received a call from Jacaranda FM’s Breakfast with Martin Bester to reveal the final amount raised, couldn’t hold back the tears: “I don’t know what to say but ‘thank you’. Many of us are concerned with a brand of coffee that we can’t find in a store, or when we’ll be able to go to the movies again, while many people don’t know where their next meal will be coming from. It’s amazing what we can do if we just look at the person next to us and believe that they are worth living for, even if they don’t believe it themselves.”

More donations can be made to DJ Jazzy D’s project here and updates will be made available via his Facebook page: www.facebook.com/djjazzyd, as well as on his show, The House Party with DJ Jazzy D.

Mediamark taking a stand against GBV in honour of Nelson Mandela Day and Women’s Month 2020.

The media sales house has called on the industry to donate R67 from Saturday, 18 July to Monday, 31 August. Mediamark will be donating up to R10 000 to match employee and client contributions.

South Africa has seen a surge in the number of domestic violence cases during the Covid-19 lockdown, with President Cyril Ramaphosa warning in June that the country was faced two epidemics.

Mediamark will be using its platform to shine a light on the plight of women and children in the country through its ‘Let Your Voice Be Heard Against GBV’ campaign.

Charlie Wannell, Mediamark’s head of marketing, says the audio and digital campaign was inspired by the heartbreaking stories of violence documented in the media.

“In recent weeks the women and men of Mediamark have been outraged by the ongoing femicide and gender-based violence that has been plaguing our country during lockdown.

“Our employees even went as far as recording this moving tribute . Therefore, we thought it would be fitting to help those organisations who support gender-based violence victims with a campaign aimed at using the might of Mediamark’s muscle – our brands and people.”

Central Media Group will bring joy and support to the young and vulnerable this Mandela Day with its Christmas in July charity campaign.

From the 6th to the 17th of July, Central Media Group campaigned for donations and support to benefit Sunflower Hospice in Bloemfontein, House of Hope in Welkom, Boipelo Child and Youth Centre in Kimberley and SAVF Rethabile Child and Youth Care Centre in Klerksdorp. All donations will be dropped off at the various charities on Mandela Day, the 18 July.

The charity drive engaged all Central South African listeners of OFM, readers of Bloemfontein Courant, and online users of digital platforms, and bring communities together, because all donations from specific cities will be given to the charity in that area.

“Christmas in July is a Central Media Group initiative that aims to make a remarkable difference to the lives of our communities in Central South Africa,” said Central Media Group CEO, Nick Efstathiou. “Central Media Group (CMG) subsidiaries, OFM, Mahareng Publishing and Digital Platforms, have partnered to drive this campaign, and ensure we are able to bring some joy and hope at this confusing time to our people. Any and all donations to this cause will be happily accepted.”

At 14h00 on Saturday, the labour of over 300 chefs in 10 cities, cooking soup with surplus produce rescued by  SA Harvest and Chefs with Compassion, will come to fruition, as 67 000 litres of soup are handed over to over 80 beneficiary organisations around the country. As the grand finale to the massive 67 000 litres cook-a-thon for Mandela Day, food trucks in the three major centres will travel in convoy to deliver the soup to vulnerable communities, along with SA Harvest’s trucks

SA Harvest and Chefs with Compassion, two organisations rooted in a philosophy of rescuing food to provide meals to the most vulnerable in our society, are rising to Madiba’s call through the collective action of hundreds of chefs who are doing what they love to do as part of the #67000litres for Mandela Day cook-a-thon.

SaidChef Coo Pillay, National Project Manager of Chefs with Compassion, “We’ve been overwhelmed by the response from chefs, sponsors, markets and suppliers all over South Africa. The spirit of Mandela is alive and well in the hospitality industry, despite the challenges we are facing.”

Since 6 April, Chefs with Compassion has provided meals to over 400 000 people through its extensive network of compassionate chefs. To donate R10 per meal click here.

In celebration of Mandela month, #ImStaying and Reflective Learning have partnered together to give the children of South Africa a better future, in Madiba’s honour, by improving the maths ability of disadvantaged students across the country.

According to Reflective Learning, by the end of Grade 9, more than 60% of learners are (on average) four grades behind in their mathematics ability. Research also shows that it is possible for learners to catch-up 4-6 grades of Maths knowledge within a single year.

To be a part of the solution and empower students, #ImStaying has launched the 67sq campaign on donations based crowdfunding platform, BackaBuddy, to not only raise funds to teach children mathematics but also equip them for future life.

“Maths is a critical subject to allow students to further their education and navigate life. When learners struggle with maths in the early years of high school, it becomes difficult for them to catch up, pass matric and join the workforce,” said founder of #Imstaying, Jarette Petzer.

Through donations, the campaign aims to sponsor 4 489 (67×67) learners with an interactive educational app created by Reflective Learning that offers personalised content to students struggling with maths.

With access to the learning platform, students will be able to identify their key problem areas and be guided through fundamental concepts to further their maths skills.

Support this cause in honour of Mandela Day, by making a donation on BackaBuddy.

In the spirit of Ubuntu and Freedom of expression, dozens of musicians and DJs from around the world are pledging their 67-minutes to spreading a message of hope, freedom, resilience, and unity through AFREEFEST, a 24-hour free-to-view music festival.

These musicians and DJs include a veritable rainbow of world-renowned musicians including locals Themba, Qadasi & Maqhinga, Abby Nurock, Sibusile Xaba, Black Picket Fence, international musicians John Fairhurst (UK), My Baby (Netherlands) and more who will be a part of the festival. Inspired by the African term of ‘Ubuntu’ meaning “humanity” and “I am because we are”, AFREEFEST is a platform that was created to share cultural experiences in art, music, and creativity.

“2020 is proving to be a year of difficulty for many of us, it is also a year that is seeing a lot of change both positive and negative. The festival that was created to give fans of music, art and creativity a space in which they can pause, breathe and connect with themselves and others,” say the festival organisers.

The festival will go online on Mandela Day, 18 July from 00:01 AM (CAT – Central African Time) till 23:59 PM and will be aired on AFREEFEST.com, SkyRoomLive and the SkyRoomLive Facebook page. Whilst the event will be FREE, viewers are encouraged to donate what they can, donations made will go towards several charitable efforts.

The MEC for the Gauteng Department of Sport, Arts, Culture and Recreation, Mbali Hlophe, highlighted the importance of harnessing a sense of creativity and literacy in schools, particularly for young children.

“To secure a bright future and progressive community, we must make a positive impact on the lives of children, invest in literacy skills and spark their thinking at preliminary stages when their minds can be nurtured, this special goes a long way in making a significant difference to our future leaders and authors,” said Hlophe.

The MEC added that the Department’s plans are nothing if they do not make room for young creatives, and they continue to work with all talents, including kid authors who will read excerpts of their published work. “The partnership with Nickelodeon Africa is crucial as it is in line with the Department’s Born to Read program aimed at inculcating the culture of reading in children, by also encouraging expectant mothers to read to their kids during pregnancy,” added MEC Hlophe.

Tasania Parsadh, Nickelodeon Africa Channel Director at ViacomCBS Networks Africa said, “Tata Madiba was passionate about education and was an avid reader throughout his life. The value of literacy in schools is of national importance, especially during these unprecedented times. While Nickelodeon makes the world a more playful place, reading drives creativity and expands kids and adults’ imaginations. We are excited to showcase these young authors and hope to inspire a culture of literacy in all kids.”