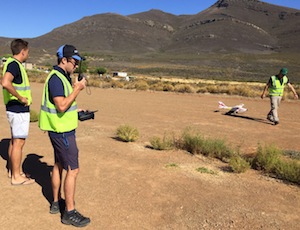 The first graduates have just been passed out of the first certified drone pilot training centre in the Western Cape. This interesting new industry  is set to explode, creating jobs and income for South Africans, especially in the media, news and film industries.

UAV Industries (UAVI), the Western Cape’s only drone pilot training centre, has released its first batch of 14 graduates. These are the first certified trained pilots who are authorised to fly drones in the region. This spells the start of new jobs in the country for a brand new industry, with just four training schools currently in South Africa.

“People think that drones are just good for Cape Town’s booming film industry, but there are a wide diversity of industries that will need, and employ, certified drone pilots – agriculture, infrastructure, and utilities, for example. Anything that manned aviation does today that doesn’t involve the transportation of passengers will be taken over by drones over the next five to 10 years so there’s huge opportunities for the industry. Things are moving incredibly quickly,” says UAV Industries chief instructor, Greg Donaldson.

“Within the first week of January we had a lot of interest from potential drone pilots and we’ve been working with mainly experienced model aeroplane flyers to convert them into legal drone pilots. In the first eight weeks we’ve had over 50 people book through our courses and our first ‘recruits’ already certified and ready to earn,” adds Donaldson.

To fly a drone legally the operator needs three items of paperwork: the drone, pilot and company all need to be licenced.

“What we’re offering through our training school is the ability to licence the pilot and to get the equivalent in manned aviation of a commercial pilot’s licence. There is a pre-on site programme and then there’s two weeks full time on site between the ground school and flight school, totalling three to four weeks in total,”  he says.

“There is a lot of detail and requirements that are needed for people to understand the airspace that one’s operating in. We need this time to shape expert flyers into commercial flyers. It’s not the ability so much to fly a drone, but it’s that concept of safe flying – all the risk assessments that go around a mission or a flight, and understanding how to integrate manned and unmanned aviation.

“Crucial in our course is airmanship. You can be the best radio control aircraft flyer, but you’ll fail our course if you don’t have situational awareness of, not just the drone, but the other users of the airspace around you – people on the ground, buildings, and property”.

“For the final pass to get your licence, we bring a Civil Aviation designated examiner out from Johannesburg who tests out every single student to Civil Aviation standards and we will not recommend a student to that test unless they meet our standards – we haven’t had one student fail so far. It’s a very good measure. The designated examiner has been very complimentary of the standard which we train our students, specifically airmanship safety.”

As part of the course, UAV Industries facilitates the entire process with Civil Aviation to get their “red book” – the pilots licence, leaving the pilot to ensure they have a legal Remote Operating Company (ROC) and the drone is registered.

Being a drone pilot is a “future-proof job”. A large function of how much the pilot can expect to earn per day depends on the equipment with drones varying in size from the size of a smartphone to a motor car.