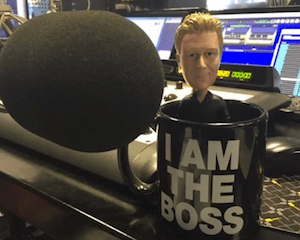 Gareth Cliff is a very busy man. Dividing his time between being a judge on Idols, his own business CliffCentral and other ventures, it was almost impossible to get an interview with him.

After quitting 5FM radio in 2014 after 16 years, Cliff embarked on something completely new, boldly launching CliffCentral.com. It began with the idea of just broadcasting Gareth Cliff’s show, but with sponsorship from WeChat, it grew into a 12hrs a day, five days a week offering.

Now the platform showcases both established names and aspiring new talent, with a focus on an integrated digital strategy that combines live listening, podcasts, abundant social media and a website.

Reflecting on the first year of its operation Cliff says, “It surpassed all our expectations, despite the initial barriers to entry. Knowing we were ahead of the curve in SA, our results in terms of the take-up of podcasts in particular, was very encouraging. There’s a huge appetite for the kind of content we deliver.”

CliffCentral emerged from Cliff’s viewpoint that all media is evolving. He believes that just as music stores and TV shows are slowly being replaced by online streaming and downloading, so too is radio headed in the same direction.

“It was only a matter of time before people would seek out and find the audio and video content they cared about online too. Radio as we know it as a medium is not going to be around forever.”

According to Cliff, disruption breeds innovation and opportunity. “If media businesses keep operating on the basis that everything will stay the same, then I’m afraid you’re in for steady declines and ultimate irrelevance. The only thing that is inevitable is change,” he explains.

For Cliff, a disruptor needs to be brave, believe in their vision and be a little bit crazy. “You need to have the balls to risk your reputation, brand and experience on the future, rather than stay in safe waters. You also can’t be too concerned about naysayers and pessimists – especially in a business where there aren’t any blueprints or experts,” he asserts.

In Cliff’s eyes, a shakeup of the South African media industry is inevitable as advertising agencies and media buyers are realising the game has changed but they still need to grasp the full extent of it.

“We need more outliers who are willing to do and say the things this country needs to see and hear. That will gain them loyal audiences in ways that research and formulae never could,” says Cliff.

He has certainly never been afraid to speak his mind recently winning a court case against M-Net who was forced to reinstate him as a judge on Idols after firing him for what they perceived to be inappropriate tweets.

And what indeed of his critics? Cliff responds to “naysayers” by maintaining that there was nothing previous to compare his platform to in this country and that the only one who had high expectations was himself.

“Many folks thought we were a show on Comedy Central and the press around that was negative – good news doesn’t sell. Everyone else who predicted we’d be around for a year and fail were wrong. We’re enjoying increasing podcast numbers across the channel and not just my show.”

Proclaiming CliffCentral here to stay, Cliff elaborates on what to expect this year. “We’re continuing to develop the most diverse and interesting array of content in Africa – everything from leadership and sex to comedy and news. We’re infinitely scalable – within a few years there could be hundreds, if not thousands of shows hosted on our platform.”

“This is just the beginning. One day we might have more listeners worldwide than we do in Johannesburg. I’m also excited about the content-creation side of the business. We have an opportunity to design a whole new kind of branded content and advertising – and we’re in a position to do this in partnership with clients, agencies and audiences.”

This story was first published in the April 2015 issue of The Media magazine.