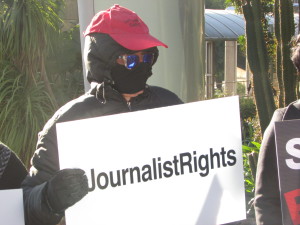 
Journalists and civil society have rallied around the SABC 8, donating over R365 000 in just two days to help the journalists fired by the public broadcaster for daring to challenge its controversial news censorship policy.

But in the meantime, as Adriaan Basson, editor in chief of News24, says, “Prizes, protests and Tweets are good and important, but they don’t pay the bills”.

Basson was responsible for launching a crowdfunding campaign to raise money for the journalists while they battle for press freedom.

The Generosity.com campaign exhorts “all who value media freedom and deeply care about the state of journalism in South Africa to crowd source some money for them, just to see them through the worst few weeks of their professional lives. Donate anything, however small, to help them and show them our unwavering support”.

“I was chatting to friends and colleagues thinking how we could help our colleagues who have just lost their jobs. They have families and kids. Prizes, protests and Tweets are good and important, but they don’t pay the bills,” Basson says of his idea to find a way to help the journalists.

“At the end of July these guys will not receive full salaries, if at all. They cannot carry the torch of media freedom with empty bank accounts. So I ‘consulted’ on Facebook and the reactions was overwhelming: Let’s do it! I received more than 600 responses which made me realise we were onto something. I consulted some clever friends and decided to use Generosity.com to launch a crowdsourced fundraiser.”

But the move wasn’t well received by all. One respondent wrote, “Are these the 1st people to be jobless in this County [sic]? Or its another white privilege case?”. And, “They are white and therefore can afford to live without SABC jobs……Who is the mad man at SABC?..The mad ones are dismissed…Give Hlaudi..Bells!!”

“Unfortunately I also think there is a cynical campaign being driven to try and divide the SABC 8 along racial lines. They will fail,” he told The Media Online.

“We launched the campaign because colleagues who we see every day had just lost their jobs. Initially it was four, but a few hours later all of the SABC 8 had lost their jobs. I wish these armchair critics would rather get off their backsides and do something! It’s easy to criticise on Twitter – rather take out your credit card and help these eight through hell.”

When he launched the campaign on Generosity.com – the money will be administered in a trust fund set up by media lawyer, Willem de Klerk – Basson didn’t expect such a massive response. “I was completely blown away. I thought at the back of my mind if we could raise R10 000 each (that’s why the target was set at U$D 6 000) that would be great. Now on day two we can already give each of them over R30 000. It shows me that South Africans care deeply about media freedom and the SABC, which belongs to us all,” he says.

Basson believes that sense of ownership, not just from journalists but also members of the public, stems from growing up listening to SAFM, Metro FM, Umhlobo Wenene, Ukhozi or RSG as well as the various television channels. “This is the most powerful medium in the country by far – it simply has to be fixed,” he says. “This is only the start.”

Watch on TMO.live, our new video channel, The Media Online’s Michael Bratt interview SOS Coalition co-ordinator, Sekoetlane Phamodi, on the structural issues at the SABC that need to be fixed for it to fulfil its role as a PUBLIC broadcaster.