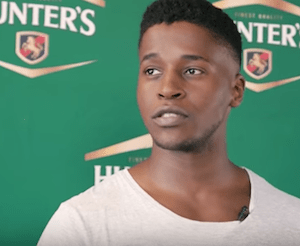 “We are selling nothing but real, natural cider. And with real, natural cider comes real, authentic people. Fez, with his disarming honesty, easy confidence, and real and genuine behaviour is as authentic, inclusive and confident as Hunter’s,” says Distell’s global marketing manager for Hunter’s, Maijaliina Hansen.

“He beat out 11 other ‘#BeTheChina’ finalists and his performance was exactly that which Hunter’s wants South Africans to emulate: real, genuine and able to take the heat. In fact, Fez’s hand gesture towards the end of this spot is a positive one, one that dares life to ‘bring it on’. This gesture and sentiment is used across the campaign to stress Hunter’s message,” she said.

The ‘spot’ Hansen refers to is part of the latest Hunter’s ad campaign, which starts today.

The ‘Bring the Heat’ through-the-line campaign includes a 45-second TV commercial, radio, out-of-home billboards, digital media and trade executions. The concept behind the new campaign taps into a common insight of the hustle of everyday life. South Africans are starting to lose their positive outlook in the face of daily challenges. Hunter’s urges them to embrace the heat that life brings and simply take it in their stride.

In the 45-second TV commercial conceived by 140BBDO’s team of creative directors Alexis Beckett and Liam Olding, and directed by Peter Pohorsky of PLANK Films, the characters take on life’s heat to the tune of Break my Stride originally made famous by Matthew Wilder.

Mhkize was born in Durban. He, his older brother (studying to be an orthopaedic surgeon) and younger sister (studying business administration) were raised by their mother on the South Coast after their father died when Fez was four years old.

He studied medicine at the University of Cape Town and is just six months away from completing his final year internship at Johannesburg General Hospital. Like his brother, he plans to specialise in surgery, possibly neuro or cardiothoracic.