New research on ownership of news media busts some myths 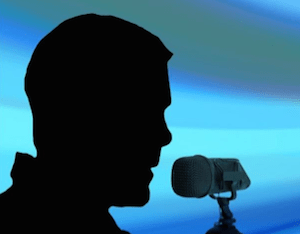 The SABC is still the most powerful media brand in South Africa when it comes to reaching audiences. The impact of independent press, from the point of view of promoting democratic values, is limited due to the relatively small audience.

Groundbreaking new research has revealed the ownership of South Africa’s news media. The Intellidex report, Who Owns the News Media, studied the shareholdings of the various media companies to answer the question, which, it said, is of enormous public interest.

Most public comments on media ownership have been “highly speculative”, says chairman of Intellidex, Stuart Theobald, besides which, there have been “significant” changes in ownership, rendering previous assessments out of date. This formed the foundation for the project to assess the true “facts of ownership”.

Theobald and another chartered financial analyst, Phibion Makuwerere, as well as company GM, Colin Anthony, studied the share registers of listed companies, sourced information from the companies themselves, searched the media for stories containing information on ownership, and checked out their BEE certificates.

Theobald said they paid “considerable attention” to black ownership, much of it facilitated by BEE certificates. Nevertheless,  he said in his introduction to the report, BEE ownership is not always what it appears.

“Even when that is the case, the funding mechanisms used to finance black ownership can effectively compromise ownership rights, for example when finance costs consume all economic benefits of ownership or when loan covenants provide for the alienation of voting rights in certain scenarios. Such details are usually only found in confidential agreements that are difficult to access through an external study.”

He said despite it being a legal requirement of companies to disclose their shareholders, some still insisted on confidentiality. “In addition, the funding of shareholder deals restricts the exercising of the normal rights that ownership confers. Genuine ownership requires that shareholders are able to sell their stakes and exercise their voting rights. Often that’s not the case, particularly in the case of BEE shareholders,” Theobald said in a statement after the release of the report, adding that not all companies co-operated in terms of sharing information.

In addition to scouring share registers and BEE certificates, the researchers got data from the Audit Bureau of Circulations, the South African Audience Research Foundation, the Broadcasting Research Foundation and Effective Measure on titles, websites, radio stations and TV stations that included size of readership and online users.

“Media ownership is nothing without an audience. And the study again highlights that the overwhelming reach of the SA Broadcasting Corporation makes it the key institution for conveying information to the public. Ownership in the private sector is important to understand, but from the point of view of promoting democratic values, the relatively small audience limits its impact,” he said.

Ownership is fairly meaningless without the ability to sell an asset and many BEE agreements ‘lock in’ black shareholders. “In my view, true black ownership and control of any company can only be reliably determined where the share register is fully visible and researchers can examine the funding commitments of those shareholders. To take the debate further, that is an important aspect to assess.” 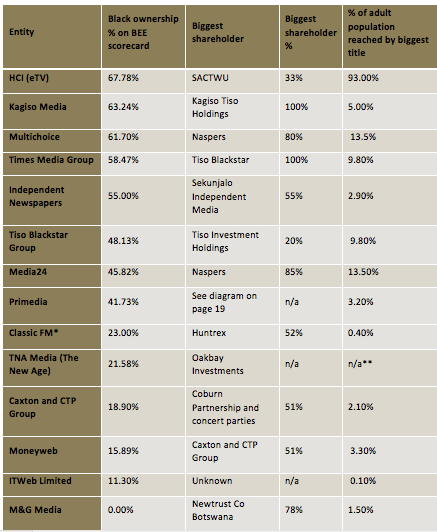 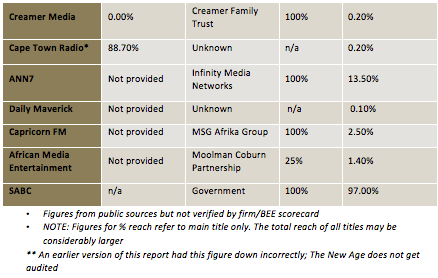