Want advice on a youth media strategy? Turn to Africa 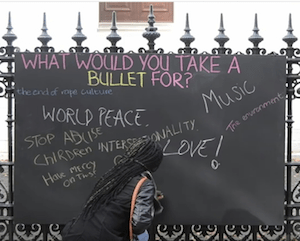 For publishers seeking advice and insights on how to attract the youth demographic to their media brands: Look no further than the youth-fertile continent of Africa.

“Africa is the youngest continent in the world,” Dr. Iqbal Survé, executive chairman of South Africa’s Independent Media, told the World News Media Congress in June. “There’s no other continent where there are so many young people under the age of 25. And it will by 2050 have 2 billion people and the largest number of young people in the world by far. So it’s important, then, to connect the way young people are connecting.”

WAN-IFRA: Many newspapers struggle to reach younger people. How is the Independent Group doing in this regard?

Survé: Independent Media is a print legacy media company, challenged by the same problems faced by print media companies around the world: rising print and distribution costs, the impact of technology, and the attendant changes in readership consumption patterns by a younger audience. Since the acquisition of Independent Media in 2013 [by Sekunjalo Group], this has been a primary consideration and is reflected in our strategy. [For more information about Independent Media, please see this related post.]

A number of taglines speak to this change in strategy, ‘Digital First, Print Best’ being the one we used to introduce and embed this thinking across Independent.

We have launched a number of initiatives which are outlined below:

In addition, the content has expanded through initiatives such as The Young Independent, to acknowledge and reflect this powerful and growing reader demographic.

What are some of the things you are doing to reach younger readers/audiences through digital and mobile?

We have launched theyoungindependents.co.za, a web portal for millennials with a strong focus on young South Africans who are excelling in various jobs and other roles in society. The portal is run by a team of millennials headed by Saajida Francis.

We have a team of multimedia journalists, MOJO, who work throughout the newsroom creating multimedia content in the formats desired by young readers.

MOJO is primarily focused on video storytelling and has spearheaded video coverage on key topics such as Youth Month, Women’s Month and the local government elections. The MOJO team, headed by Viasen Soobramoney, have also set up messaging groups for news and use social media extensively to bring young audiences to our journalism.

This year we launched an internship programme as part of our #RacismStopsWithMe initiative. They are focused on race and racism in South Africa and brought 100 young intern journalists into our newsrooms. They are doing multimedia, all-format journalism across print and digital platforms. [Editor’s note: See also Stop Racism campaign.] 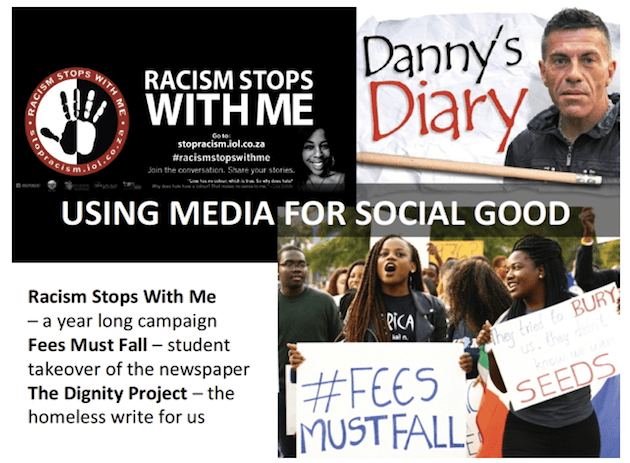 Our youth month initiative, #76AT40, was extremely dynamic in reaching younger audiences. The content we created for the initiative identified three key areas/themes that shaped our content generation i.e: “Remember, Honour, Act.”

The team created a WhatsApp portal to distribute our content in addition to our traditional platforms both online and offline. In two months, we have amassed an audience of around 2 500 people, and this continues to grow on a daily basis.

During the initiative, we created a wide variety of multimedia content, with video being the core content driver. No doubt the centrepiece of this initiative was a video we created titled: “What would you take a bullet for?”

The video was conceptualised by one of our interns and involved us pinning a chalkboard on the gates of parliament and inviting passers-by to write down what they would take a bullet for.

The context was that the class of ’76 [Editor’s note: participants in the 1976 Soweto Uprising, in which students protested against being taught in Afrikaans] were prepared to take a bullet for what they believed in. 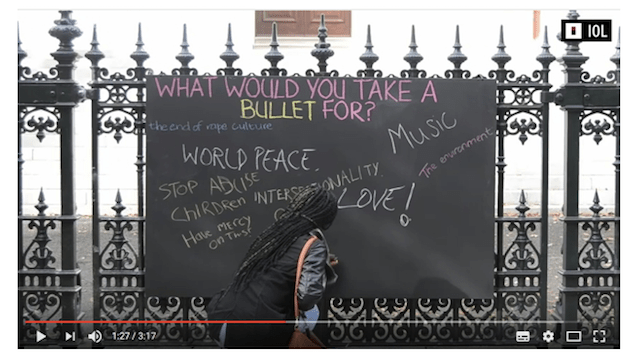 The response was phenomenal, but the engagement with our audience when the video flighted was even better. Using WhatsApp, we asked our users to send us voice notes and share pictures with us. We also utilised the IOL App with the Mojo Reporter App technology built into it to allow our audience to send us content directly.

Overall, the campaign and platforms we used were highly relevant to the content we produced, which resulted in increased engagement, particularly allowing us to reach younger audiences that we traditionally were not reaching.

What is the most important thing you’ve learned in your work targeting younger groups so far?

The most important thing we’ve learned is the need to understand and feed your audience on their most convenient platform.

We find that the younger groups are brand- and platform-agnostic; they want information now and fast, so we have to be everywhere to reach them.

We found that the constant engagement is also extremely important, as the younger audience is switched on ALL the time.

Accuracy and reputation is also key to engaging with the younger audience; they are quick, sharp and ready to point out something that’s wrong or that they don’t agree with.

Is there also a need for changes in the organisational and human resources (HR) parts of the business if you want to stay attractive for young readers?

The business has had to shift structurally to accommodate the way in which news and content is being consumed by a new generation of readers – the generation that will become dominant in the future.

As has been stated, this recognises that video and mobile are respectively the fastest growing platforms for the consumption of online content. This has involved having to re-design the company to acknowledge this shift, a role in which the human resources department has played a pivotal role.

The MOJO project began as in internship in 2015, funded by a sectoral training body, the Fibre, Processing & Manufacturing Sector Education and Training Authority (FP&M SETA).

In 2016, 100 interns were recruited for the #RacismStopsWithMe project, also in partnership with the FP&M SETA. The human resources department led the recruitment process in this regard.

From a skills development and training perspective, HR plays an essential role, driving the process internally as well as liaising with external stakeholders, such as the SETA, tertiary institutions and other stakeholders as required.

Internally, 300 journalists across the company have been trained in multimedia skills. The recruitment drive for editorial staff has also shifted to target journalists who come with the skill sets required for a modern media company.

Are there any figures about the development of your younger readership that you can share?

These figures, weighted to population, represent 19.8 million 15-35 year olds in total and 1.8 million readers of INM newspaper titles. Amps includes deep rural areas among the areas that it is conducted in.

What has been your biggest success so far in your efforts to reach younger people?

Our biggest success is undoubtedly the advent of our mojoIOL Twitter handle and Facebook page as primary platforms for our unit.

The Twitter feed has developed a younger, millennial-centric identity that resonates with younger people. It also provides Independent with the opportunity to make our content more available and relevant to our younger audiences. We are also on WhatsApp and Instagram.

Having a team of millennials also ensures that our content is youthful while still maintaining the authority we command as a print legacy media organisation.

The fact that we use mobile phones to create content also gives us an edge when it comes to reaching our younger audiences as all the content is geared and built to be Mobile first. The following are the platforms on which MOJO can be found.

Can you also tell us something about the monetisation of your activities with this target group?

The Young Independents is a completely commercially-driven initiative. Our approach toward revenue generation is highly entrepreneurial, i.e. work on pre-commitments to the product to ensure sustainable revenues and value creation.

We recognise that our audience consume content on multi-platforms; in our sales approach, we seek to present 360-degree solution taking advantage of our brand, audience and reach.

Our revenue drivers includes multiple touch points: newspapers, online, social media and events. Each platform plays a definitive role, and we need to understand how we build on these for revenue generations.

In addition, we are rolling out at revenue streams through sponsored video content, product placement, customised content for clients as part of a 360-degree solution for clients, which are not just focused on our print platforms.

Are you currently planning or developing any digital or mobile products/services specifically aimed at younger people?

In addition to the ones I have already mentioned, we will soon launch a pure video play platform, driven off social media, which is aimed at a millennial audience for whom video is a platform of choice.

We are constantly innovating in order to remain relevant as well as sustainable in the age of modern media.

Dr. Survé will speak at a session about millennials at Digital Media Africa 2016, 28-30 September in Johannesburg.