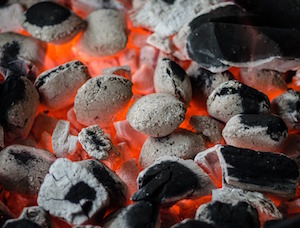 Braai Day has been embraced by local brands as a strong sales opportunity. Oresti Patricios, CEO of Brand Intelligence company Ornico today released results of an advertising survey on Heritage Day revealing that only some 37% of advertisers used the term ‘Heritage Day’ exclusively in their advertising. These advertisers included government departments such as the department of arts and culture, who promoted cultural events to celebrate 24 September 2016.

The balance, some 63%, focused either entirely on ‘Braai Day’ or used some combination of ‘Braai Day’ and ‘Heritage Day’ in brand messaging. This shows that ‘Braai Day’ is being strongly propelled by commercial interests.

Ornico’s research discovered that some 121 unique brands used the September public holiday to associate with ‘Heritage Day’ or ‘Braai Day’ in ads created for print, radio or TV. The survey focused on print and broadcast media, and excluded social or digital media.

Of the 121 brand advertisers, 54, or 44.6%, branded their advertising with ‘Braai Day’. That’s close on half of the ads that used the term ‘Braai Day’ exclusively, or focused offerings on braai meat and equipment, without mentioning Heritage Day.

Twenty-two of the ads — or 18.2% of them — combined both Heritage Day and Braai Day, or managed to conflate the two conceptually. By way of example, an ad that had ‘Heritage Day’ in the copy, but that primarily used the advertising opportunity to sell braai food or supplies, was categorised as ‘conflated’ in the research.

Forty-five of the ads, or 37.2%, were exclusively classified as ‘Heritage Day’ ads, and did not use the term ‘Braai Day’ or include anything to do with a barbeque. These included public service announcements and ads for Heritage Day events (that were not braai-oriented). 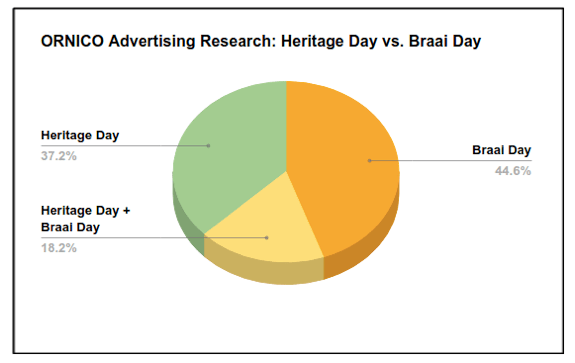 The sample Ornico looked at was 121 adverts broadcast on channels like Highveld Stereo 947, and SABC TV, and published in publications such as The Star, Beeld and the Diamond Fields Advertiser. As stated, the research didn’t include social or digital campaigns. Brands that embraced ‘Braai Day’ included Checkers, Pick n Pay, Food Lover’s Market and Picardi Rebel Liquors, while those that elected to promote through ‘Heritage Day’ included The Cradle of Humankind, Celltone Skincare, Rama Margarine and OK Furniture.

This indicates that ‘Braai Day’ is a commercial construction that’s being propelled by brands and advertisers who want to sell goods. But this is not universally accepted by South Africans, and there’s a strong push-back on social media that brands should be listening to. Commenters on social media echo the sentiment of writers like respected essayist T.O. Molefe, who feels that re-branding the day as ‘Braai Day’ subverts the original intentions for commemorating the day.

If that’s what even a minority of people think, then it’s important for marketers (and the National Heritage Council, which endorsed this idea) to take notice. Do you really want to alienate a vocal, upwardly mobile segment of your market?

According to SA History Online, Heritage Day— which falls annually on 24 September—replaced Shaka Day, a holiday dear to people who appreciate Zulu tradition and heritage. Parliament was set to scrap the holiday, but the IFP objected. Heritage Day was created as a compromise, so that all South Africans can celebrate their cultural heritage.

At the time, then President Nelson Mandela said that the decision to create Heritage Day was important because “we knew that our rich and varied cultural heritage has a profound power to help build our new nation.”

At braai.com — the website which promotes ‘Braai Day’ — it is suggested that “Across race, language, region and religion, we all share one common heritage. It is called many things: Chisa Nyama, Braai and Ukosa…” The ‘Braai Day’ campaign calls for South Africans “to contribute to strengthening South Africa as a nation through this act of nation building and social cohesion.” — Through throwing some meat on the barbie.

The problem with this commercial opportunity is that many people perceive that ‘Braai Day’ doesn’t support the aims of Heritage Day, which is to learn about, and celebrate, our cultural differences. By homogenising Heritage Day into Braai Day, we do our country a disservice. At the same time, marketers are missing the point and agitating a very vocal sector of SA’s social media users.

I would advocate that marketers should rather embrace the true spirit of Heritage Day and design campaigns that reinforce the original intent behind the holiday. We have much to celebrate in this country in terms of our diversity, and we need to genuinely see each other and recognise how our differences are our strengths. So much about politics in particular divides us, why are marketer’s aggravating this instead unifying South Africans?