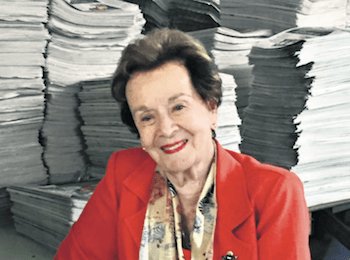 The founder of the Zululand Observer, Regina Anthony, has announced her decision – at the age of 89 – to retire gracefully from the newspaper she single-handedly started in 1969.

Dubbed ‘the doyenne of the community press’, Reg (as she has been fondly known to generations of Zululanders) has not only achieved every possible milestone and accolade in her long and distinguished career, but has also guided – and goaded – scores  of award-winning journalists and sales reps along the way.

The evolution of the printed media

A stickler for detail, customer service and commitment, Reg has lived through – and triumphed – in the evolution of the printed media from the early lead typesetting days to the current electronic online era, always remaining relevant despite the change of the medium, and always ready for a new challenge.

A prolific public speaker and with a true community heart, Reg has placed a high value on giving back to the community from which she wished to receive.

Businesswoman, mother, grandmother,  great- grandmother , church  organist, philanthropist  and with a  dozen other  hats she wears with distinction, she has consciously used her multi-award-winning newspaper and her personal influence as vehicles for upliftment and positive change.

With abandoned children, the elderly and the poorest of the poor nearest to her heart, Reg founded the DICE (Do I Care Enough?) charity arm of the Zululand Observer in 1973.

Like the newspaper, it has grown into a massive organisation that reaches into almost every corner of the community.

Over the years, her commitment to ‘local’ has extended to serving on the Empangeni Council; Chair and Patron of CANSA uThungulu; Chair and Honorary Life Member of Empangeni Child Welfare; Chair  of the Zululand Chamber of Business Foundation; Exco member of Zululand Business Against Crime; and many other responsibilities.

Likewise, Reg’s ‘trophy cabinet’ is filled with awards acknowledging her contribution to society at large, among them the Rotary International Paul Harris Fellowship. By setting the highest standards for herself and insisting on the same from her staff, who despite her unrelenting attitude in demanding total commitment, have nothing but praise and admiration for this wonderful person, Reg has ensured her legacy will continue long past her retirement date.

‘Taking it easy’ has never been part of her vocabulary and she has carefully planned the succession of her two beloved ‘babies’ – the Zululand Observer and DICE. ~ David Savides: Editor, Zululand Observer

My word: Re-tired or Re-Try?

There is an adage which says, ‘We did not realise we were making memories, we were just having fun.’

On reflection that just about sums up my feelings when I look back on my 46 years of toil, sweat – yes tears – love and laughter from when I first started a roneoed news sheet called the Spotlight on my dining table, which was the forerunner  of the birth of my beloved Zululand Observer.

My first glimpse of Richards Bay in 1965 was a little village with 47 fishing shacks. The rondavel thatched roof cottages which formed the Richards Bay hotel was our haven of rest.

To combat the mosquito influx, the rooms, restaurant and guests – if you did not move away fast – were liberally sprayed with bug repellents daily.

However, Friday night was THE night. The local musicians pitched and a medley of musical instruments – including guitar, ukelele, piano, accordion  and drums – set the pace  for a sokkiejol which would have made Steve Hofmeyr’s repertoire sound like the Hebrew Slave Chorus from the opera Nabucco.

I do take umbrage at the word ‘Re-tired’. I know a heck of a lot of folk who start off their lives at 21 being ‘tired’.

Why not say `Re-Try’, for surely this is the time when you reflect on past years, do the things you wanted to but never did, improve or rectify past negatives when you were younger, stupid and ignorant and a host of other interests you never ‘had time to do’.

Throughout my career  I truly experienced that  no man is an island unto himself. I cherish the memories of the many many people we employed since our first 800 Zululand Observers were distributed, the support  and encouragement of the community, the uplifting role the ZO played in the growth and advancement we shared with so many Zululanders.

Our outreach programme (DICE – Do I Care Enough?) is my pride and joy providing me with the privilege of meeting some wonderful people who are true icons when it comes to Ubuntu.

I shall be dividing my ‘Retry’ between Zululand and Durban knowing that the ZO is in the capable hands of my son Gavin as MD, my grandson Lee and a host of dedicated professional staff members who I shall sorely miss. My shareholders Caxton are the epitome of  a happy marriage between two companies who firmly believe that community newspapers will thrive and grow.

Needless to say my late husband Les, my sons Lawrence and Gavin, daughter Terrie, and my incredible family now in its fourth generation, were my inspiration to create a legacy for my family and for our beautiful Zululand. ~ Regina Anthony: Founder Zululand Observer

This story was first published in the Zululand Observer and is republished here with permission.