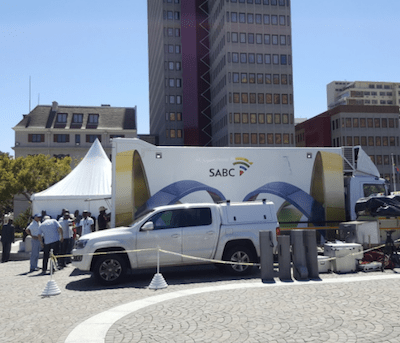 It’s SONA time, and Parliament’s presiding officers say it’s all systems go for a “successful” State of the Nation Address despite “a bit of excitement about one or two matters”, as National Assembly Speaker Baleka Mbete put it.

On the eve of President Jacob Zuma delivering his statement on the state of South Africa, Mbete and National Council of Provinces (NCOP) chairperson Thandi Modise on Wednesday swatted away controversies – be it the deployment of 441 soldiers, unprecedented security measures including a visible presence of the State Security Agency (SSA) across the parliamentary precinct, and concerns over media restrictions on the day.

In a parliamentary committee room, members of the justice, crime prevention and safety & security cluster – effectively the police, defence force and State Security Agency (SSA) – on Wednesday afternoon handed in their cellphones and signed an attendance register for a meeting. Two of the “bouncers”, the public order police drafted into the parliamentary protection services and in the forefront of evicting EFF MPs amid past disruptions in the House, were in charge outside to man the table lined with white envelopes.

According to Clause 4 of the 2004 Powers, Privileges and Immunities of Parliament and Provincial Legislatures Act, security services, defined in the Constitution as the police, defence force and intelligence services, may be at Parliament “only with the permission and under the authority of the Speaker or the Chairperson [of the NCOP]”.

When asked about the numbers of SSA, SAPS and soldiers the presiding officers had approved to be in the parliamentary precinct, Mbete referred such queries to the “executive authority”, effectively the ministers in charge of the various services.

Perhaps the presiding officers didn’t know about the security cluster meeting, or maybe they did and just didn’t want to say. NCOP chairperson Thandi Modise earlier in Wednesday’s media briefing maintained that the presiding officers jealously guarded the separation of powers between the legislature, executive and judiciary. “So far we have not given any instruction for police to run amok in the precinct. We have not given any instructions for members of the defence, SSA.”

Freedom of movement for media?

The official message on the military’s deployment was that Mbete and Modise would “find out” why the numbers have gone up to 441 this year, from 188 in 2015 and 168 in 2013. But both presiding officers said no soldiers aside from those in the ceremonial parades would be in the precinct. “They simply are allowed to be where (they must be) in places we are never conscious of as Parliament,” explained Mbete.

This was also the undertaking given to an urgently scheduled meeting between presiding officers, political parties’ chief whips and, also present, the Secretary to Parliament Gengezi Mgidlana.

With regards to concerns by the media, presiding officers said they did not understand the reasons as nothing different was arranged for SONA 2017, and repeated that journalists had freedom of movement to do their work free of fear. However, there was no response when asked what the media should do if hindered by security personnel on the day.

A planned meeting between the Parliamentary Press Gallery Association (PGA) and Parliament’s senior managers broke down over the national legislature’s refusal to withdraw a statement claiming a liaison committee had been established after Tuesday evening’s meeting between Mgidlana, the PGA and the South African National Editors’ Forum (Sanef).

“The statement was misleading and claimed that agreement on a range of issues had been reached. The statement amounted to a breach of trust in ongoing attempts to find a solution to our serious concerns about security plans at Parliament,” Sanef said subsequently. “Sanef has always understood and abided by special measures implemented in the past during special events like SONA. However, 24 hours ahead of the event, there are many concerns and questions remaining.” 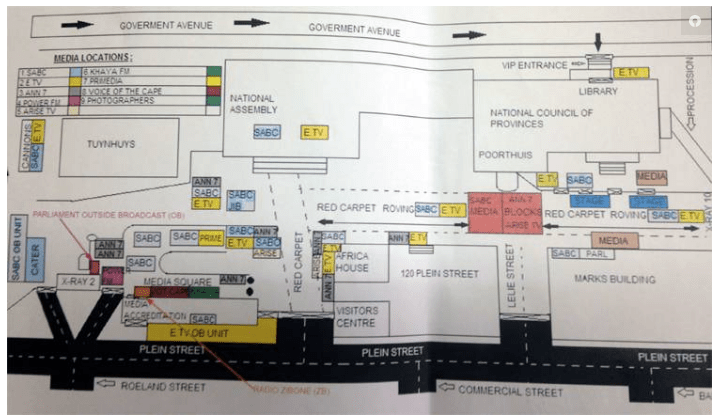 While official verbal assurances have been given, Parliament’s map for media allocations makes it clear there have been changes from previous years. The traditional red carpet fashion parade hotspot is now allocated exclusively to the SABC and ANN7. The map, including its “media square”, make provision for “media” behind a stage near the National Council of Provinces (NCOP), and a significant distance away from where MPs, ministers and their guests as well as dignitaries walk, and cross the red carpet, to the Poorthuis entrance.

But after the media briefing it was time for Mbete and Modise to practice taking the 21-gun salute – Zuma will join them on Thursday as part of the pomp and ceremony – on a little red-carpeted podium at the bottom of the stairs to the National Assembly. Inside, florists were draping railings with flower arrangements and placing large bouquets of fresh flowers.

On Wednesday mid-morning a police helicopter made a low fly-over above central Cape Town whose streets were already lined with “no stopping” signs ready for when the barricades go up. By the afternoon a phalanx of national traffic police cars, all with Gauteng number plates, were parked opposite Parliament. 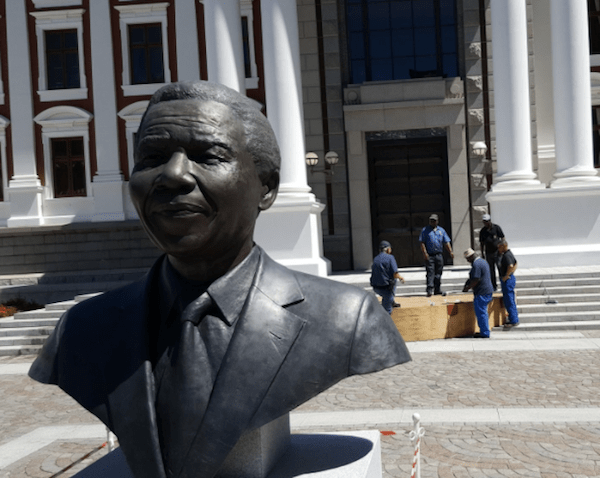 In the parliamentary precinct police sniffer dogs were being walked up and down. Groups led by uniformed officers were inspecting the precinct. There are now several additional CCTV cameras at entrances and elsewhere, with at least one tied with red ribbon. Special tents with X-ray machines were up at all entrances.

Meanwhile, workers were putting up a stage or two, giving plants a last-minute trim and fixing this and that. Deliveries were crowding into the precinct as the clocked ticks down to the deadline, barring all further deliveries until Friday.

Elsewhere in Cape Town, there was the mining indaba of CEOs and ministers and dignitaries, some 10 minutes walk from Parliament. Save South Africa hosted its alternate SONA at St George’s Cathedral, a frequent shelter for anti-apartheid activists in the 1980s. And DA national leader Mmusi Maimane delivered his message of hope for South Africa’s youth.

The ANC sent its top officials to communities across Cape Town to bring home its message of unity in action, and priorities of land reform, jobs, real socio-economic transformation to redress structural inequality. It will all culminate in a people’s assembly on the Grand Parade, central Cape Town, where after watching Zuma’s SONA, the president will arrive for a meet-and-greet.

Government is pursuing its own SONA build-up programme. And so Zuma hosted a high tea with special guests at his Cape Town home of Genadendal on Wednesday afternoon. “The opening of Parliament and the State of the Nation Address is a very important event for our country as it reminds us of our history and the long journey that our country has taken to ensure a better life for all’,” the Presidency statement quotes Zuma as saying.

His deputy, Cyril Ramaphosa, announced the R20-an-hour minimum wage, or R3500 a month for those working 40 hours a week, as a “historic” and significant move that would benefit 6.6-million South Africans currently earning less than that. It will kick in on May 1, 2018, but domestic and farm workers will have to wait a little longer: for two years their income will be pegged at 75% and 90% of the minimum wage.

“It is not a living wage but this forms a firm foundation of moving our country towards a living wage. It’s a start,” said Ramaphosa, adding that he was confident Cosatu would also sign the agreement once it has completed its report back to its central executive committee in two weeks. This sign-up, concluded on Tuesday, could well feature in Zuma’s SONA as one of his administration’s successes.

Back at Parliament, the institution’s presiding officers said SONA 2017 should proceed to plan. And amid word that the EFF would again raise points of order at the start of the presidential address, Modise was firm that the only agenda for the day was the president’s address.

“We do have the rules of procedure that we will follow. We hope all MPs will respect the rules and we don’t have to take extraordinary measures,” said Modise.

This story was first published by The Daily Maverick and is republished here with the permission of the editor.