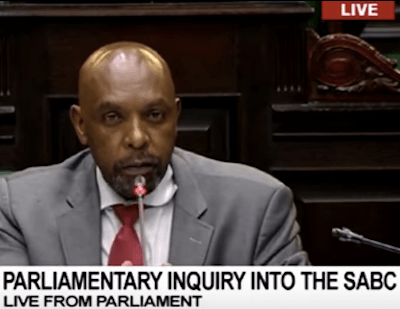 Having monitored the SABC’s coverage in the run-up to all our democratic elections, in 2016 Media Monitoring Africa found evidence for the first time of systemic bias. This is a clear and present threat to our democracy. Yet MMA’s evidence to the inquiry was omitted from the findings.

The interim report by the ad hoc committee on the SABC board inquiry makes for some sober reading, and there are some vital findings. Sadly, and to some extent this is to be expected, it doesn’t capture the full extent of the operatic crises that ranged from the futile and corrupt to the blatantly offensive and criminal.

It is a pity, as the hearings themselves were riveting viewing, and not in the more recent attention-grabbing ways with violence and thuggery or demeaning behaviour. The inquiry was riveting because seldom have we seen parliamentarians as collectively engaged, or so many key players squirming under pressure, with a chair polite to the point of ruthlessness. It was an exercise of parliamentary beauty, rigorous questions, uncomfortable assertions and answers, startling evidence, accountability in action. It helped restore my faith in the process and believe that party politics can be trumped by democratic imperatives.

We cannot be naive about the inquiry. Had Parliament done its job as thoroughly over the last decade, we wouldn’t be in this mess to begin with.

It would be easy, given the events of last week’s State of the Nation Address, to give up on any hope of the report being taken seriously, let alone acted upon.

It would also be easy to think that the whole exercise was merely about wanting to make sure it looked like action would be taken.

With 23 years of democracy under our belt, however, we should know that building a democracy and shifting our country to realise the promise of our Constitution is anything but easy. As in any system there will always be those in power who will seek to use it to their personal advantage – from the call centre agent for an appalling bank who just has to drop the call, to the politicians who can shift big resources and secure long-term benefits, power is frequently abused.

It was an exercise of parliamentary beauty, rigorous questions, uncomfortable assertions and answers, startling evidence, accountability in action.

What the inquiry did show is that it is possible to hold people to account. So while it may be easy to be cynical and assume it will end in nothing, we owe it to our democracy to do all we can to make sure that it doesn’t.

We (i.e Media Monitoring Africa, MMA) have been watching the SABC for the last 24 years, and we will continue to do so. It is precisely because we have been monitoring the SABC since before we became a democracy that the findings and evidence we presented in Parliament are important and must be included in the final report.

We made a presentation when we appeared as witnesses before the SABC Inquiry and that was backed up by two separate more detailed reports. In essence however we presented on critical areas that speak directly to the mandate and editorial independence of the SABC.

Having monitored the SABC’s coverage in the run-up to all our democratic elections, in 2016 we found evidence for the first time of systemic bias. It might not sound like much, as people often accuse the SABC of bias in an election period. While there are indeed worrying instances, our evidence generally demonstrates that in election periods the overwhelming majority of the SABC coverage is fair.

Generally in an election period the SABC services go to great lengths to not only ensure coverage is fair but also that they have the greatest diversity of parties covered. The SABC, partly due to resources, but also due to its public service mandate, tends to have diverse, quality elections programmes where most have tended to adhere to formulas and clear internal guidelines on elections coverage – and by and large with a few exceptions the coverage across the SABC services (radio and TV channels) has tended to be overwhelmingly fair.

While there are indeed worrying instances, our evidence generally demonstrates that in election periods the overwhelming majority of the SABC coverage is fair.

This isn’t to say the coverage has all been excellent; focusing on election issues as opposed to party campaigning has been an ongoing bugbear in our reports (see 2016 and 2014 data here), as has ongoing gender inequality of sources and reporting gender issues as elections stories.

Despite these issues, however, the coverage was broadly fair. Until 2016.

A finding of systemic bias means that it wasn’t only one story that clearly presented one party favourably and another negatively; systemic bias occurs over time and indicates clear trends and patterns, such as that one party is favoured to the detriment of others or that certain parties are negatively portrayed on a systemic basis.

Systemic bias matters, because instead of offering a diversity of views it seeks to limit and under-inform or misinform audiences and sway them in a particular direction. For free and fair elections to take place it is essential that voters are able to make informed decisions about which party they want to vote for. If media, and the public broadcaster in particular, has some services that are biased it fundamentally undermines the potential for voters to be informed. If voters aren’t fully informed they may not be able to make fair or even free decisions about which party to vote for.

This is, after all, why the media in general and public broadcasters in particular are seen as such powerful tools in countries where there isn’t democracy, because if the media can be controlled there is a hope that you can control the audience as well.

The finding that there was evidence of systemic bias in some of the SABC services (and I must stress that there were some really strong public service oriented elections programmes) is very serious, as it poses a clear and present threat to our democracy.

It is staggering, therefore, given that we offered clear evidence in our presentation and in a more detailed report, that the finding was omitted entirely from the SABC findings and/ or recommendations. Of course we can guess as to why this might be – the unifying halo that allowed all parties to unite in their condemnation of a bunch of megalomaniacs and self-interested fools was suddenly challenged at the thought that the actions of said thugs might actually favour some parties over others. We were strongly challenged when we presented the findings, which gives credence to this view.

… the unifying halo that allowed all parties to unite in their condemnation of a bunch of megalomaniacs and self-interested fools was suddenly challenged at the thought that the actions of said thugs might actually favour some parties over others.

Even if the committee did not want to take on the evidence without any question, the mere fact it was presented under oath and supported by 24 years of experience surely warrants that such actions be investigated by an interim board, and that the IEC should be asked to also play a role?

The second core issue we raised surrounded the protest policy ban; we note this was one of the direct issues mentioned in 2.1.2 of the terms of reference In essence a decision was taken at the top that no visuals of violent protest would be shown on SABC (see here for earlier piece on what was wrong with it). Media Monitoring Africa, supported by the SOS Coalition and the Freedom of Expression Institute, challenged the decision before the complaints and compliance committee of Icasa.

We won. SABC initially refused to accept the decision but over the next few days and a series of flip-flops eventually said they would adhere to the ruling to reverse the policy.

They even went so far at one point as to say that they hadn’t implemented it to begin with (see here). We did some monitoring and found that not only was the ban in place in the run-up to the election, but that it was, and remained in place even after the ruling by ICASA and a commitment by the SABC to adhere to the ruling. ICASA was also not convinced that the SABC had adhered to the ruling and in fact laid criminal argues against the SABC board for noncompliance.

Despite the importance of the evidence presented, clearly showing that the SABC had failed to adhere to the ruling, no mention of it is made in the interim report.

It is a profound omission from the findings for two reasons.

First, it constituted a clear breach of the very fundamental elements of the mandate of the SABC as delivering balanced, fair and informative news and adhering to the highest standards of journalism.

Second, that the SABC board not only failed to ensure that the ruling by ICASA to reverse the ban was implemented but that they grossly misrepresented the truth in suggesting that the decision had been adhered to. Given the issue was specifically referred to in the inquiry terms of reference, the question needs to be asked as to why it was given such short shrift in the findings.

We heard also of the crass and patently offensive response by the SABC to the violence and intimidation being faced by the SABC Eight.

Finally, there can be little doubt that the evidence presented by some of the SABC Eight was incredibly powerful and moving. Presented in all its gory detail, we heard first-hand of the slimy methods, of the threats, of the fear, of the censorship and harm experienced by the journalists. We heard of the pain and trauma of those who dared to stand up – and were left to imagine the pain of those who didn’t. We heard also of the crass and patently offensive response by the SABC to the violence and intimidation being faced by the SABC Eight.

Indeed, the evidence was so powerful that the ad hoc committee members were moved to personally apologise. The committee chair was palpably angered by the lack of response by the SABC and concern that the culprits had not yet been caught. Again, given the significance of the events and implications for accountability, editorial independence let alone mental and physical well-being of the journalists, it may have been expected that the section of findings in the report would be equally significant – yet instead we have some clauses referring to journalists “being discouraged” or encouraged to “self-censor”. While clearly important, the omission of the threats and intimidation does the inquiry a significant injustice.

There is little doubt that the ad hoc committee inquiry has been one of the clearest examples of parliamentary accountability and all members must be applauded for their commitment and efforts. It would however deeply undermine the value and efforts made if the final report and recommendations make serious omissions or end up with a compromised set of findings. Such an approach might be politically satisfying for powerful interests, but they would also undo much of the credibility they have sought to restore to the process of parliamentary accountability.

William Bird is director, Ashoka and Linc Fellow, Media Monitoring Africa. This story was first published by Daily Maverick and is republished here with the permission of the editor.