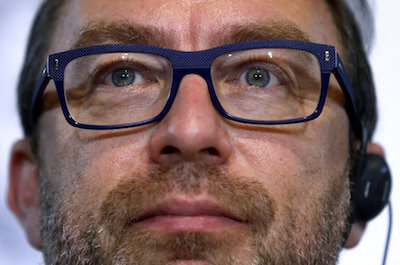 US entrepreneur and founder and promoter of Wikipedia, Jimmy Wales. EPA/J.L. CEREIJIDO


Having redefined and restructured one historical repository of trusted information, the encyclopedia, Jimmy Wales is now taking on another, the newspaper.

His new initiative, called Wikitribune, will combine the work of paid professional journalists with volunteer contributors. It’s an effort to counter the rise of ‘fake news‘ and other forms of misinformation by exposing it to the scrutiny of the entire world.

The model is similar, though not identical, to that of Wikipedia, with which Wikitribune is not formally affiliated. The news site will be free of advertising and free to read, with funding provided by donors and by “supporters”.

These monthly subscribers will have the ability to shape the site’s agenda, for instance by steering journalists towards coverage of particular issues, although the editorial process will block attempts to artificially boost pet projects or perspectives. The public will be able to modify and update articles, but updates will not be published until they have been approved by a Wikitribune journalist or another trusted source.

In other words: Crowd-funded, crowd-sourced and crowd-fact checked.

Will it work? The success of Wikipedia suggests it might. Wikipedia now includes nearly 5.4 million English-language entries, totalling 42 million-plus pages. It also publishes in 294 other languages, including a great many that most of us have never heard of, and claims 68 million users worldwide.

Yes, all that information is from its own website. But I believe it.

And that’s the point. Wikipedia has earned the trust of millions of global users by listening to its critics and transparently making a good faith effort to address their concerns. Information that is found to be flawed is removed, and various other changes through the years have strengthened the reliability of its content without gutting the central concept: real people have interesting and valuable contributions to make to the storehouse of what the rest of us know.

As Wales admits, “It’s noisy and not a perfect place.” But Wikipedia’s openness has proved to be its strength. It’s not so much about the general wisdom of the crowd as about the particular wisdom of the millions of individuals who make up that crowd.

Will Wikitribune prove financially sustainable? Again, it might. The election of Donald Trump was, at least for some segments of society, a wake-up call that high quality news is valuable enough to actually pay for. Leading print publications such as The New York Times and The Guardian among others, as well as investigative sites such as ProPublica, have seen a sharp increase in subscriptions.

Although no one has yet had clear success with crowd-funded news, initiatives such as pay-per-view news aggregator Blendle and member-funded de Correspondent (both Dutch in origin but testing the US market) continue to innovate. Someone is going to get there. And it might well be Wales. He has the experience, the connections, the vision and the passion.

Finally, the most important question is whether Wikitribune will change anything. Again, it just might. The surge in populist politics in Europe and the US has had shocking effects but isn’t inherently startling. The anger and frustration of people who feel they are being ignored, misled or outright trammelled by powerful institutions in society – including the media – was palpable well before the Brexit referendum, the 2016 US election or the rise of Marine Le Pen in France. And around the world, trust in the media is at a historic low.

Wikitribune proposes to counter that sense of alienation not just by making people feel the news is relevant to them but also by inviting them to directly and personally engage with its production. If you feel a news account is inaccurate, propose a correction. If you feel it is biased, provide the countervailing evidence.

If you are wrong, no harm done. Your contribution will be vetted and rejected, and at least one bit of fake news will not blight our collective understanding of the world. But if you are right, then you have helped not just yourself but the rest of us, as well. Because in the end, we all share responsibility for the health of our networked society.