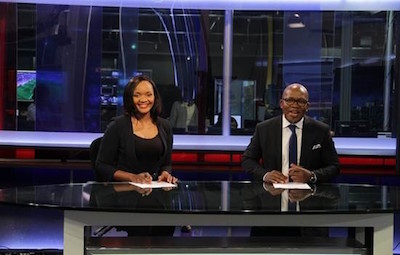 The shuffle followed the departure of Iman Rappetti, who resigned after 11 years at the cable news station. “It has been a heady, tough, rewarding, crazy ride. The decision to leave is not an easy one but I need to put my family first,” she said at the time.

eNCA news director Mapi Mhlangu said on eNCA.com that the Mvoko/Mohlahlana partnership was a strong one. “Vuyo brings political knowledge and years of experience and Cathy has excelled as an anchor since she moved from field reporting. There is a great synergy between the two,” said Mhlangu.

Mvoko said he was excited to be back at eNCA because this is where his television journalism career began in 1999. “With everything going on in the country today, Cathy and I hope to rise to the challenge of telling the story as it unfolds,” said Mvoko. He was part of the SABC8 who challenged SABC News policy, at the time enforced by suspended COO, Hlaudi Motsoeneng. But because he was an independent, who was contracted to the SABC, and not a permanent employee, he did not enjoy the protection of courts that his seven colleagues did and was dismissed.

Mohlahlana is ready for the challenge, but mindful of the responsibilities it brings. “The need for fair and credible news continues to increase. It’s exciting to be part of team which endeavours to do just that,” she said.

With Maggs moving to News Day, Michelle Craig and Shahan Ramkissoon will move from 9am to 1pm daily. Joanne Joseph remains in her popular 4pm to 6pm slot. Uveka Rangappa and Dan Moyane remain on Morning News Today.