Motsoeneng’s ‘reign of terror’ at the SABC now over 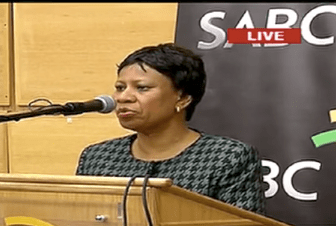 Hlaudi Motsoeneng’s “reign of terror” at the SABC is over. The former chief operations officer was summarily dismissed by the broadcaster’s interim board after a disciplinary inquiry found him guilty of misconduct and bringing his employer into disrepute.

Interviewed shortly after a press conference addressed by board’s chairman, Khanyisile Kweyama, member of the SOS Coalitions and broadcast researcher Kate Skinner said Motsoeneng’s dismissal was “incredible news” and that his “reign of terror” had finally ended.

Kweyama also said Motsoeneng’s ban on broadcasting scenes of protests had been overturned, that a new editorial policy was being discussed and that his unilateral order that all radio stations play 90% South African music – a move said to have had a hugely negative impact on the broke broadcaster’s bottom line – had been shelved.

At the press conference, Kweyama said the conditions of Motsoeneng’s contract with the SABC was null and void as he’d been dismissed. “He didn’t respect the contract, so we don’t have to respect it either,” she said. She said he’d breached the terms of his fixed-term contract and was “guilty on all charges’.

Motsoeneng’s lawyer, Zola Majavu, told The Media Online he had received Motsoeneng’s dismissal letter but “not the judgement referred therein”. Majavu said he had pointed out this oversight to the secretary of the chairman of the SABC board. “I am certain they would rectify the error. As soon as I receive the judgement, I will pass on to client for his instructions. Until then I am unable to comment further as I simply do not have instructions. I do not want to cast aspersions on anyone as I am also travelling and thus with limited access to emails,” he said.

The interim board’s move has been well-received in most quarters. William Bird, director of Media Monitoring Africa, said it was “great news”.

“We so used to bad news, and utterly bizarre news, we forgot what normal process looks like!  To be clear, there are a litany of reasons why Mr Motsoeneng should be removed. It is a first and essential step to halting the crises at the SABC,” he said.

“The reality is that when we talk about the crises at the SABC, the removal of Mr Motsoeneng addresses only one of them. We need to support the interim board and then apply pressure for a credible long term board. We then also need to fix structural issues, about how the senior management are appointed. We need to ensure ministerial interference is significantly reduced and that parliament continues to do its job,” said Bird.

Motsoeneng was finally dismissed over an unauthorised press  briefing he and his ‘friends’ held in April in which he lambasted the interim board, and defended his 90% local music move, believed to have cost the broadcaster millions in lost advertising revenue, and which still left musicians without the promised revenue as the SABC now owes in the region of R75 million musicians and music rights organisations. The interim board also shut down the lucrative – for The New Age – business briefings which saw the Gupta-owned newspaper paid a fortune to host its ‘business briefings’.

The Democratic Alliance, which has fought Motsoeneng in a number of court cases, believes the “very litigious Motsoeneng is likely to take the interim board’s decision on review. We advise him not to waste the public and the SABC’s time and money on what will be barren harvest litigation. Throughout several court judgments, including one by the SCA, Mr Motsoeneng has been found to be unsuitable to hold office at the public broadcaster,” it said in a statement.

Motsoeneng’s legal fees alone have cost the broadcaster a fortune. A story in City Press on Sunday reported that the SABC’s Human Resources, Governance and Nominations Committee was unhappy over an invoice from Majavu for the amount of R493 100.50, which the SABC has refused to pay. Majavu refused to answer The Media Online’s questions about Motsoeneng’s legal fees.

The DA, in its statement, said, “The Public Protector also recommended that any fruitless and wasteful expenditure that had been incurred as a result of irregular salary increments to Mr Motsoeneng, Ms [Sully] Motsweni, Ms [Leah] Khumalo and the freelancers, is recovered from the appropriate persons’.”

Bird, asked about money and Motsoeneng (besides his personal legal fees, he also inflated his salary to the tune of millions), said he suspected there would be a “a range of investigations that need to take place into his affairs”.

For starters, he said, “though his decisions that have cost the SABC dearly, including the decision to fight us in trying to defend the indefensible Public Protest ban, should be laid firmly at his door. Perhaps more urgently than holding him fully accountable, we need to ensure that the various key appointments he has made are reviewed. We know from various insiders that many of his enforcers remain and they too must be held accountable”.

Fight far from over

The interim board was given six months by parliament’s portfolio committee on communications to deal with issues crippling the broadcaster and preventing it from carrying out its mandate. This came after hearings into the situation at the SABC were initiated by parliament, uncovering a mess at the broadcaster.

The fight is far from over, the DA said. “While Motsoeneng’s dismissal is indeed to be welcomed, he must still be held accountable for his reign of terror at the SABC. He does not get off scot-free for his past sins, simply by being dismissed today [Monday],” it said.

The party wants the interim board to proceed with the second disciplinary inquiry flowing from the Public Protector’s 2014 When Governance and Ethics Fail, as ordered by the Western Cape High Court in December 2016.

“The Western Cape High Court directed the SABC to commence disciplinary proceedings against Motsoeneng for his dishonesty relating to the misrepresentation of his qualifications, abuse of power and improper conduct in the appointments and salary increments of Ms Sully Motsweni, and for his role in the purging of senior staff members resulting in numerous labour disputes and settlement awards against the SABC,” it said.