LATEST NEWS
Home Press Freedom of expression is not just for journalists, it is for everyone

Freedom of expression is not just for journalists, it is for everyone 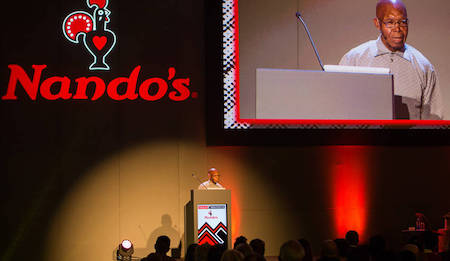 Allow me to start my talk with a personal story that illustrates our current dilemma: In 1977, I was a guest of the State, detained in Pietermaritzburg under Section 6 of the Terrorism Act. My father was allowed to send me R10 a month, which I had to personally sign for at the Post Office. The Security Police would interrupt their torture sessions at the Alexandra Street Police Station and escort me to collect the money.

I remember one particular trip vividly. As the police were driving, they taunted me: “Look at these people in the street and show us one oppressed black person. Look at those two… they are laughing and enjoying themselves. Can you point out one unhappy person who looks oppressed?”

I could not point to one but I insisted they were oppressed and unhappy.

When we got to the Post Office and we got out of the car, I was, as usual, self-conscious because of the handcuffs and the leg chains. My hair stood wild because I hadn’t combed it for days.

Two women walking past commented loudly in isiZulu: “This one must be a ruthless killer. That’s why they’ve shackled him this way. Look at his hair! He is a killer.”

Their comments were as stinging as the taunts from the police, who saw only happy and satisfied ‘Bantus’. To them the ‘baas’ had given us work and civilised us with education and religion. They were not different from the women who wrote my ‘biography’ in their minds.

I ‘knew’ the women because I spoke their language and lived with them in Orlando East and in Sofasonke Mpanza’s Shantytown in Johannesburg and in Sobantu and Edendale in Pietermaritzburg. I knew the pain hidden behind their laughter.

The policemen would probably tell the Truth and Reconciliation Commission that they didn’t know the effects of apartheid: they had been indoctrinated to believe that what their leaders were doing was for the good of the Bantu and “die Vaderland”.

We were a country divided: the one side not hearing the other. And those of us who tried to tell what we thought was the truth ended up in jail, in exile, gagged from publishing anything or working as journalists, or we ended up dead. You will remember the Nat Nakasas, the Can Thembas, the Juby Mayets, the Thami Mazwais, the Thenji Mtintsos, the Ernest Coles – each one of us here will have his or her list.

Stoking passion for freedom of expression

It’s these ugly memories that stoke my passion for freedom of expression, for freedom of the press and other media. We should never again have to use the fig leaf of “I didn’t know”.

It has been 21 years since our founding fathers, the 490 members of the Constitutional Assembly, collated the collective wisdom of the country into the Constitution of South Africa. In one phase they received 250 000 submissions from the public.

And it is out of this collective wisdom that they wrote:

(1) Everyone has the right to freedom of expression, which includes:

(a) freedom of the press and other media;

(b) freedom to receive and impart information or ideas;

The authors were already planning the utopia materialising before us now – each man, woman, and child becoming his or her own news editor, reporter, sub-editor and distributor – all at the click of a button on his or her own device.

All settled 21 years ago. So why should we be discussing this today when this Gathering should be about new issues like the technology revolution that has changed our work life, about lies that have been wrapped in fancy ribbons and called “fake news” – if it’s fake it can’t be news – or about how to improve the quality of our journalism.

Sadly, we South Africans glossed over Section 16 of the Constitution and did not assimilate it into our culture in spite of several important decisions by our courts, including the Constitutional Court.

The courts have, for example, stated: “The Constitution recognises that people in our society must be able to hear, form and express opinions freely. For freedom of expression is the cornerstone of democracy. It is valuable both for its intrinsic importance and because it is instrumentally useful. It is useful in protecting democracy, by informing citizens, encouraging debate and enabling folly and misgovernance to be exposed. It also helps the search for truth by both individuals and society generally. If society represses views it considers unacceptable, they may never be exposed as wrong. Open debate enhances truth-finding and enables us to scrutinise political argument and deliberate social values.”

(As an aside, let me point out that when a Penny Sparrow tweets that blacks are monkeys, she hasn’t taken anything from me. I know I’m not a monkey, she and her readers know that I’m not a monkey. I can respond via Twitter or any other media and show how ridiculous she is. When I scream ‘racist!’ and use state resources to pursue her, I’m caught in a puerile game and the nation chases a red herring – our attention is diverted from the real issues of poverty and regression and theft in our society.)

The tinkering has started

Freedom of expression and freedom of the press are cornerstones of our democracy and when we temper with these we endanger the very fabric of the society we have known since 1996.

This tinkering has started.

In recent weeks, for example, the South African National Editors’ Forum and 11 journalists, commentators and editors asked the High Court in Johannesburg for an urgent interdict against Black First Land First (BLF) members, to stop them from harassing, intimidating, assaulting and threatening journalists.

The BLF has largely ignored the court order and continues harassing journalists. For example, Micah Reddy of amaBhungane, was accosted by BLF supporters as he left a TV production set in Braamfontein, Johannesburg on 18 July, just days after the interdict.

Some residents in Coligny in the North West have harassed journalists covering protests there.

A few journalists have also complained about the harsh treatment they have received from the police.

A more ominous threat, however, is that of a statutory Media Appeals Tribunal, and it has been hanging over print media since the 2007 ANC conference in Polokwane. The ANC was part of the Constitutional Assembly that gave us Section 16.

It is not just the threat of a statutory MAT that bothers the media – it is the anti-media rhetoric that accompanies this threat, which could be fuelling the violence against journalists. The ANC might appear to be on the side of the angels when it speaks out against the BLF thugs – the ANC brandishes the Constitution as it does this – but it is inadvertently encouraging the BLF anti-media posture with its own rhetoric around the Media Appeals Tribunal.

This country needs a more informed discussion of Section 16.

Personally, I don’t fear that the MAT will materialise. the ConCourt will strike it down because it of the freedom of expression provisions in the constitution of the country. The tragedy of the exercise is that so much time and money – taxpayers’ money – will have been wasted on the road to the ConCourt.

Logic of MAT eludes us

A quick look at the arguments advanced by the ANC for wanting an MAT is revealing.

In its policy document on communications, the ANC argues that self-regulation of print media in SA has failed as there are insufficient punitive measures which can be taken (for example no fines can be imposed).

The logic of this assertion eludes us. First, there is an unsubstantiated allegation that self-regulation has failed, and then instead of substantiating it, the authors bizarrely leap to “insufficient punitive measures.” The party has never shown how they arrive at the conclusion that it has failed.

Allow us to break this assertion to its components. Since 2013 the Press Council has defined itself as a system of independent co-regulation with the partners being the media and the public, and explicitly excluding government. This was done to comply with the recommendations of the Press Freedom Commission (PFC), led by the late former Chief Justice Pius Langa.

The architecture of the Press Council ensures this independence.

The constitution of the Press Council affirms its independence: “1.3 The constituent associations named in 1.2. explicitly guarantee the independence of the PCSA, so that it can act without fear or favour in the interests of a free and ethical press, and in pursuit of the aims and objectives set out below.”

The constituent associations – South African National Editors’ Forum, the Association of Independent Publishers, the Forum of Community Journalists, and the Interactive Advertising Bureau South Africa (online publishers) – nominate the eight media representatives. The public representatives are appointed by an Appointments Panel, headed by another eminent jurist, Justice Yvonne Mokgoro, sitting with two media representatives and two public representatives. First, they advertise the positions in media across our land, then they draw up a shortlist of people to interview and make the appointments after the interviews. All South Africans over the age of 18 may apply. The Press Council found this a more open and democratic system than retaining seats for various sectors of society like the trade unions, the religious community, the legal fraternity/sorority, etc.

This is a truly independent co-regulatory system.

Now that we have correctly defined the system, we need to assess whether it has failed or not. The yardstick to measure success or failure is the promise that an individual or an organisation makes and the extent to which it lives up to that promise. The Press Council acknowledges that the South African Constitution states:

The Press Council is not a court of law, but sees itself an “alternative dispute resolution” mechanism providing “a speedy and cost-effective process” for resolving the complaints of readers. It is designed for people who want to clear their names quickly without having to spend thousands of rand for lawyers and years in the courts. It is not for those who are out for revenge, hoping to get “sufficiently punitive measures” against publications; that is the terrain of law enforcement agencies and the courts.

Last year, for example, 536 people used our system. They knew right from the beginning what they were letting themselves in for. We made it clear what they can expect from the system.

That having been said, we can get to the nub of this argument. The right to choose is at the heart of our democracy; publications choose to be members of the Press Council, they are not forced to be. Any attempt to force publications to be part of any forum that prescribes journalistic standards will be struck down by the Constitutional Court. Our standards are set by the member publications and their readers and are not imposed from outside the newsroom. Member publications sign up because they truly embrace these “high standards of journalism and ethical conduct”. It is good business.

All that the Press Council offers is an alternative to expensive and long-drawn out litigation.

Ladies and gentlemen, so many people have sacrificed their lives for the freedom of expression that is enshrined in our Bill of Rights. None of us here believes they suffered or died in vain. We need to honour them.

Ask yourself: How much am I prepared to pay to preserve these freedoms? Is my voice loud enough against those who threaten freedom of expression?

Freedom of expression is not just for journalists, it is for everyone, to quote the Constitution.

Joe Thloloe is director of the Press Council. This is the speech he delivered at the recent Daily Maverick: The Gathering Media Edition.