LATEST NEWS
Home News On the record: Gathering of great and good to talk about… media

On the record: Gathering of great and good to talk about… media 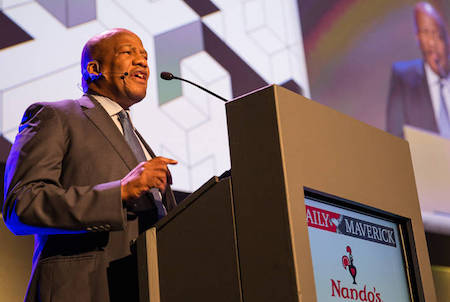 
While the BLF shouted and screamed outside the Cape Town International Convention Centre after being denied entrance to the Daily Maverick’s The Gathering: Media Edition, inside the venue guests were treated to a series of challenging and provocative debates and discussions on South Africa’s media.

The BLF eventually drove away in a bright red Audi A1, which Daily Maverick investigative journalist Pauli van Wyk discovered belonged to former Eskom CEO Brian Molefe’s son. Van Wyk was subjected to a barrage of foul-mouthed racial epithets by the BLF’s leader, Andile Mngxitama, when she dared question who paid for them to come to Cape Town. Of course, there is a restraining order against the BLF, initiated by the South African National Editors Forum, after they threatened various journalists involved in the Gupta Leaks with violence. And the Daily Maverick’s gathering saw most of them in one place.

The ANC’s chief whip, Jackson Mthembu, was a panelist in the Hijacking Media for Political Gain session, moderated by the razor-sharp Stephen Grootes. Mthembu reiterated his call for police to arrest the BLF. He was harassed by the group as he entered the venue, but refused to engage, saying he didn’t speak to “fools”.

Prior to the politically charged Political Gain session, the audience was treated to an important discussion on Business: Having a Voice in Media and Politics, moderated by EWN’s Bruce Whitfield. Panelists included the outspoken Wendy Appelbaum, Save South Africa’s Sipho Pityana, M&C Saatchi Abel’s Mike Abel and the Daily Maverick’s Styli Charalambous.

“We need to say this, loud and clear, today: Like the evils of apartheid that were exposed by The World, Rand Daily Mail and the Sunday Post in the 1970s and 1980s, the evil that journalists are exposing now is abhorrent, and a threat to the survival of our country, and the humanity of our countrymen,” Pityana said in his opening address. “In both cases, our journalists have exposed the criminals that are conspiring to dehumanise millions of our people. Back then, it was for an evil and corrupt ideology, while today it is a cabal of thieves and looters who are pillaging our public purse. Journalists and whistleblowers are shining a light on a band of criminals who are diverting billions of rands that could be used to feed, educate and uplift our people, and moving it to Dubai.”

Pityana laid into the BLF, calling them the “ugly stepchildren of the Guptas and their Bell Pottinger project”. He said the untold story was who was funding the “brown shirt thugs”.

“But it is not just journalists who should be concerned about the rise of BLF thuggery, the Gupta propaganda channels and the explosion of fake news,” he said. “Business should be equally worried, as it sees the other Gupta tentacles tighten their grip on our economy. So too should the faith-based community, professional bodies, our youth and broader civil society. Because today it is journalists who are under attack – tomorrow, it will almost certainly be you.”

The lively discussion posited various ways to sustain the media and help fund it so it can continue shining a light on state capture and corporate corruption. Suggestions ranged from financially supporting investigative units (without expectation of returns) to stepping up advertising, the “most transparent” way of ensuring media sustainability.[Hear hear!] As Charalambous said, he’s often been told by brands and advertisers that the Daily Maverick is “too political” yet the work it and other independent media does exposes issues vital to functioning of business in the country.

Press Ombud Joe Thloloe presented a lecture on self-regulation of the media ahead of a panel discussion on Civil Society, Media and Public Activism. “The battle for media freedom is not just one for journalists, it is one for everyone committed to our democracy. How much are we willing to pay to make sure this is not pulled away from us?” he asked.

The issue of funding came up once more in this discussion. Panelists – Fatima Hassan, Section 27’s Mark Heywood and Jay Naidoo, former labour DG in Mandela’s government and a former general secretary of Cosatu who is now involved in environmental activism – agreed the media should play more of a role in highlighting issues impacting on the poor, and poor leadership on service delivery.

“We have to start seeing the human costs, otherwise we cannot galvanise our society to stand up. Journalists must expand the ambit of reporting to help drive and fix the results of state capture,” Heywood said, adding that society needed to start mobilising against issues such as the appalling state of education, drugs, femicide, destruction of infrastructure.

They came up with a novel idea: Why shouldn’t business use some of their corporate social investment budget to ethical journalism. Naidoo said corporates spent billions on “cutting the ribbon” which had no real impact on change.

Hot on the heels of Thloloe’s lecture on self-regulation, the ANC’s Mthembu, in his opening address, immediately brought up the idea of a Media Appeals Tribunal. Again. He also said the media should have its own Truth and Reconciliation Commission and apologise for its role in apartheid. Grootes, to hoots from the audience, said he understood why Mthembu preferred to talk about the past rather than the present.

The other two panelists in the session were the DA’s Phumzile van Damme and Mbuyiseni Ndlozi from the EFF. Ndlozi called Mthembu out when he mooted the idea that parliament should look into independent media regulation.

“We have a body that you say that accountability of the media must be referred to – Parliament. Then questions arise – what has Parliament done to hold accountable the people mentioned in #GuptaLeaks? You refer us to Gwede Mantashe!” he said, pointing out how incongruous Mthembu’s remarks on media accountability were when he refused to answer questions on whether he, as chief whip, had hauled in MPs mentioned in Gupta Leaks.

Van Damme said the DA supported self-regulation. “We believe that peer review is the best way for the media to keep itself accountable,” she said. Van Damme said more had to be done on checking fake news.