The inside story of the Shelley Garland scandal 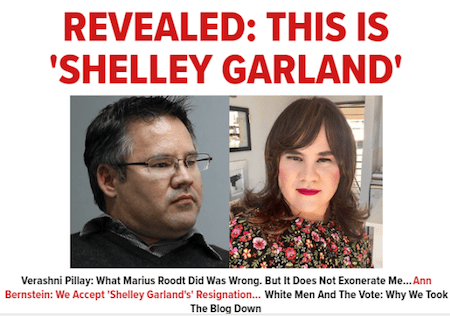 Just over three months ago, what was supposed to be a slow-moving Easter weekend was disrupted by a contentious blog published by the Huffington Post that had white men seething, not just in South Africa but also around the world. The Shelley Garland scandal erupted across media, social and otherwise, leaving a trail of devastation in its wake.

Its editor in chief, Verashni Pillay, resigned. Blogs editor Sipho Hlongwane later left the title just ahead of a disciplinary hearing. News editor Deshnee Subramany resigned from her post and has launched a CCMA action against Media24, which owns the title in South Africa, citing ‘constructive dismissal’. Readership of the site and its reputation both took big hits.

Yesterday [Monday 31 July 2017], Pillay faced off against AfriForum and the Press Ombudsman’s office in her appeal against a hate speech ruling handed down after the HuffPost SA published the blog, ‘Could it be time to deny white men the franchise?’ which questioned whether white men should be denied the vote in South Africa.

A day later, in the face of widespread criticism, Pillay responded with a piece of her own, ‘This blog on white men is going viral. Here’s our response’ in which she defended its publication. Then the offending blog was removed, and Pillay said in a post HuffPost SA had done so “because the blog submission from an individual who called herself Shelley Garland, who claimed to be an MA student at UCT, cannot be traced and appears not to exist”.

The blogger turned out to be Marius Roodt, a (now former) researcher at the Centre for Development and Enterprise (CDE). He apologised, saying he didn’t mean for it to go so far and he had no intention of going after Pillay. “I just thought you can say almost anything you want… not necessarily attacking white men. I think there is a lack of fact checking in South African journalism. I thought, would it work? And it worked. In hindsight I wouldn’t have done it, I didn’t think it would get this big,” Roodt told the Huffington Post.

Just five months earlier, the Huffington Post South Africa launched with much fanfare, flying their ‘fierce and fun’ tagline with vigour and optimism. It had a talented and transformed team in place, and although it was a start-up, it had the power of Media24 and experienced management behind it.

But behind the scenes, things weren’t going so well. Pillay, in an exclusive interview with The Media Online, says there were structural factors at play that played a role in the fake blog scandal. She says she received an instruction from general manager Charlene Beukes to have blogs editor Hlongwane take on a writing role in a bid to increase traffic and because there weren’t enough reporters. “At the same time we had to produce 30 pieces of unique content a day with just three junior reporters. This meant we were relying on unpaid blogs and aggregations to meet the target. So Sipho was spending his work hours reporting and having to do his job as blogs editor at night. He was extremely stretched and exhausted and moderating blogs in that state is a recipe for disaster,” she says.

“He was also being pressurised to put out too many blogs a day in order to meet our target of 30 pieces of content a day of which blogs made up a large chunk. I had no support staff and was very thinly stretched too. An independent SWOT analysis of the team presented to Charlene found I was doing the job of two to three people. I couldn’t keep tabs on everything.”

But Ferial Haffajee, editor at large at the Huffington Post SA, denies the staff was overstretched. “As a former weekly editor, I am constantly in awe of our young reporters who do so much more with so much less. The HuffPost SA requirements are pretty standard for this new world [of digital publishing]. They include material from wires, from all the HuffPost international editions, from a morning writer who is on contract to provide a selection of daily news for early risers and from News24,” she says, adding that their targets are “not onerous given all these ready-made wonderful services to tap”.

“My colleagues are wonderful, productive and great journalists, but not one of them is producing at the rumoured pace of four original stories per day you suggest and there is no expectation of that. Sipho is a most wonderful writer, but he never did more than two stories a week by my count – the two were inevitably magnificent.” Haffajee says HuffPost SA is now planning for original long-form special reporting that “gives journalists a sense of professional satisfaction and which is building us an audience”.

But Pillay’s KPA document specifically refers to her having to “produce and load a minimum of 30 pieces of content daily, original and aggregated”. This was over and above content from other Huffington Post titles and copy from News24.

There was another issue at play, too, and that was the lack of sub-editors. Pillay in February wrote to Beukes saying she was increasingly concerned that the HuffPost SA could face legal or ethical problems, possibly on social media, due to the volume of content coming through, and the speed at which it was being processed. She requested that budget be found for subs but was told it was not up for discussion and that “we should get out of our print mentality”.

Asked whether this had changed after the Shelley Garland blog, Haffajee confirmed that to “strengthen this capability of ours further, we are hiring a full time revise sub-editor”.

She said at the time of the Shelley Garland/Marius Roodt incident, “neither the editor in chief nor the blogs editor had read the blog properly nor put it through standard tests to see whether it met the basic standards in our industry code or our Constitution ahead of publishing”.

Beukes says, “We have of course doubled down and strengthened our systems and processes after the fake blog incident during Easter weekend, but to be clear, there were very specific processes, checks and balances in place.  The issue here is that it was not followed. That is the crux of it.”

Pillay says she has accepted responsibility for what went wrong and for her part in it. “We should have taken greater care before publishing the blog and I should have responded sooner to concerns over the blog and blogger’s identity,” she says. “While all newsrooms are stretched these days I think this was an extreme example where not only key resources were denied but unattainable targets were set.”

She says she resigned because she wanted to take responsibility for what went wrong. “In addition, the company made it clear that they no longer supported me as editor and it would be difficult to continue working in such an environment,” Pillay says.

Asked if she regretted the response she wrote defending the blog, Pillay says she stands by what she said. “I agree with the underlying analysis that white men have historically held disproportionate power and that a loss of oppressive power is necessary to level the playing field. At no point did I agree with the argument to take away the vote from white men, and I specifically said I did not agree with everything in the original blog.

“In retrospect it seems crazy that there was such an enormous over-reaction to this sentiment, and perhaps indicative of a larger ill in a society,” she says.

Pillay says her biggest takeout from the incident is that editors are trying to “do too much with too little at management’s behest”.

“After I resigned another editor said to me, ‘If every editor had to resign when they made a mistake, no one would want to be an editor”. Many other editors have said they know it could have happened to them.” She references a recent case in which Soccer Laduma published a fake interview. “The CEO of Soccer Laduma pointed out the same problem when explaining their mistake with the fake interview. Less content of better quality and a commitment to rigorous reporting and proper checks is in everyone’s best interest: newsrooms, and audiences,” Pillay says.

While researching the background to this story, The Media Online spoke to at least five sources within the Huffington Post. A number of them referred to a disconnect between the ideology of a young newsroom and what they said was the more conservative nature of management and Media24 itself. They also mentioned an “atmosphere of fear” not just due to the pressure of a large dashboard showing how content performs in real time, but also in terms of management.

Talking about the dashboard, Haffajee says it’s not a scary instrument, “it only tells you what your readers are reading and what they are not. It tells you instantly what works and what does not. As a print émigré, I find this profoundly helpful as we no longer have to wait for reader surveys that come in months later”.

Good newsrooms, says Haffajee, are an “amalgam of interests, politics, cultures and experiences – diversity of views is not a scary thing, it is a wonderful thing”. She says they had a “group think” after the Shelley Garland blog that identified a problem: “There wasn’t sufficient diversity to see the problem with the blog. I hope the incident has embedded the view that there are many telescopes into issues and as good journalists, we have to take account of these and also of our Code and our Constitution which binds us to a set of values,” she says.

Beukes says the main focus now is to regain momentum. “As a team and as a young brand we have learned valuable lessons from this incident and believe that in the long run it will make HuffPost SA stronger, not weaker,” she told The Media Online.

“Our immediate focus is regaining our momentum and the HuffPost SA team, under the extraordinary leadership of editor-at-large, Ferial Haffajee, newly appointed Pieter du Toit as editor-in-chief and Noxolo Mafu as deputy editor are working very hard at it and our numbers are really encouraging,” she says.

She points out that in June, HuffPost SA made its debut among the top 10 news sites in South Africa with 1.2m unique browsers reported for June, measured by Effective Measure). “This is good for a nimble young newcomer!” she says.

She points to high impact special reports and quality features on the recent ANC policy conference, the Betrayal Report; Natural Hair; Colourism; Black Tax and Forex Trading as being growth drivers and says the team has solid plans in place to build the news, politics, entertainment and lifestyle pillars even further.

With Pillay’s appeal taking place this week, the spotlight is shining once more on the issue of hate speech. What will transpire is a story for another day.

Haffajee sums up her feelings. “It was a rubbish blog, as I’ve written, and should never have been published for reasons of quality. That it is now at the centre of one of our most important debates on what is hate speech or what is not makes me want to cry.  The entire incident has made everybody very aware of being gamed and of being used: I am about halfway through a huge study of fake news.”