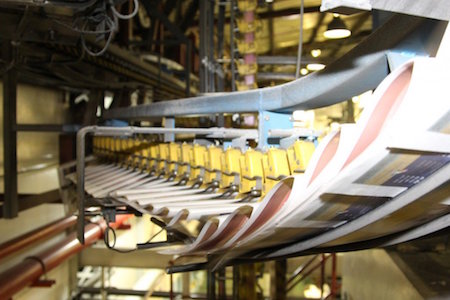 Print and media group Caxton & CTP Publishers and Printers ended the financial year to June 2017 with just under R2 billion in cash on its balance sheet. For a company with a market cap of only R4.8 billion, this is a significant pot of money.

Announcing its annual results on Thursday, Caxton noted that while the operating environment in South Africa remains tough, it is still looking for ways to grow the business.

“The general state of the economy is not expected to improve in the short term and this will hamper meaningful organic growth, but does present interesting acquisition opportunities,” Caxton noted. “The group is in an enviable position with a strong balance sheet and ample cash reserves to take advantage of any opportunities that arise.”

These acquisitions also demonstrate Caxton’s intention to continue to diversify away from its traditional print media business, where it faces declining circulations and advertising revenue.

Overall, Caxton group revenues were unchanged for the year, at R6.4 billion. Profit for the year was marginally down from R456 million to R455 million.

“The group has performed creditably in the year under review, and has managed to maintain earnings at the same level as the previous year, notwithstanding increasingly difficult trading conditions,” Caxton reported.

“Revenue ended flat compared to the prior year and was impacted by declining local advertising revenues and further declines in magazine circulation and advertising revenue. This was offset by good growth in our book printing division on the back of increased text book demand and pleasing revenue growth at the Western Cape flexible packaging operation. The recent acquisitions have also contributed positively both to revenue and profits.”

Caxton reported that within its newspaper, publishing and printing division, local titles had experienced a drop in revenues due to the weak consumer climate. Classified, motoring and property advertising is also increasingly shifting to digital platforms. The company is however developing its own local digital offerings in an attempt to retain advertising in these categories.

The book printing division benefited from increased demand from educational publishers, based on a big increase in spending on text books by the Eastern Cape Province. However, this was the only positive in an otherwise depressed market.

The group’s packaging and stationery divisions accounted for 36% of revenues and 38% of profits after depreciation. This showed a marginal increase from the previous year.

“The packaging markets that we service continue to be highly competitive in nature,” Caxton noted. “[This] requires the continued focus on being a low-cost manufacturer, which the recent acquisitions and reorganisations are aimed to achieve. The group is on the continued lookout for further acquisition opportunities that complement our portfolio of products.”

After the end of the financial year, Caxton disposed of its 50.72% holding in Moneyweb to African Media Entertainment (AME) for 218 627 ordinary shares in AME. It also concluded an agreement to purchase an effective 50.0% of digital property portal, Private Property, for R122.9 million. The deal is subject to regulatory approval.