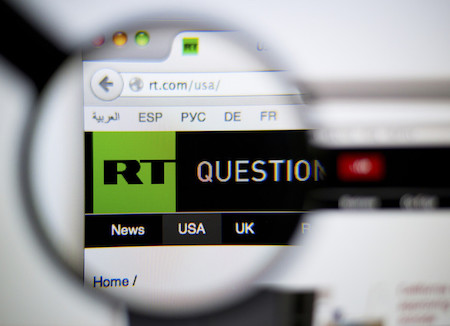 As stories of Russian “information warfare” in various Western countries continue to mount, governments, intelligence agencies and journalists are fretting over the influence of global media outlets funded by autocratic governments. But while these organisations are clearly meant to serve their sponsor governments’ agendas in various ways, is the West right to be so worried about them?

Information campaigning in various forms is as old as politics itself, and nor is it the sole province of political bogeymen. Research shows that democracies are better than autocracies at influencing foreign public opinion, and businesses, politicians and states all use the mass media strategically for their information campaigns.

Whether this is public relations, public diplomacy, or propaganda is a matter of perspective. But the names we give a particular information campaign not only reflect our inferences about its aims; they can in fact amplify its power and advance its goals.

A case in point is the Kremlin-funded international broadcaster RT, formerly Russia Today. The network has been sanctioned by media watchdogs for its “misleading” coverage, even as it gathered five Emmy nominations for its investigative reporting. It was even cited by Hillary Clinton in 2011 as an example of an “information war” she said the West was losing – unwittingly describing things to come in her own career.

The network’s PR strategy skilfully uses these criticisms to cater to the biases of an anti-establishment generation. Its motto encourages viewers to “Question More”, and its various advertising campaigns have successfully exhibited Western contempt and suspicion as a badge of honour.

Yet despite the concerns of high-ranking figures, the US State Department has claimed none of the US$80m recently allocated by Congress for informational countermeasures, and the bulk of the funds will expire if not claimed by the end of September 2017. Some fear that the US is reluctant to risk a Russian backlash by leading a counter-disinformation offensive, leaving the legwork to initiatives like the controversial new Hamilton 68 dashboard, which claims to track Russian-backed influence campaigns across the web and social media.

But just how much influence RT and similar outlets wield is very much open to question.

While many in US intelligence and politics seem to take RT’s self-reported audience figures as read, the channel’s official data is optimistic compared to its externally verified viewing figures. And despite RT’s pride at being “the most watched news network on YouTube”, most of its views go to apolitical clickbait human interest stories and coverage of natural disasters.

Some argue that RT’s smaller political audience is self-selecting: those who mistrust the mainstream establishment and are partial to conspiracy theories. However, this is all guesswork: so far, there has been little scholarly attention to RT’s audience engagement, despite its social media advantage over its competitors during breaking news events. (The University of Manchester and Open University will soon address this knowledge gap with the Reframing Russia project, the first systematic examination of RT’s audiences, ethos and multiplatform output.)

While RT may have limited capacity to influence those not already sympathetic to its aims, its reach across social and traditional media, and freedom from any commitment to impartiality, equip it perfectly for an atmosphere of rumour and counter-rumour.

This brings us back to Donald Trump and his ongoing crusade against the mainstream media.

Trump echoes RT’s line that all news reporting is biased in some way, and his social media output clearly flatters the views of his followers and allies. Trump’s tweets are, intentionally or not, perfectly calibrated to exploit the same effect as RT: audiences seek out content that accords with their political beliefs, and ignore information that does not correspond to their biases.

This effect is even clearer where people have strong political beliefs and ideologically segregated social media networks, because algorithms lock our preferences into our social media experience. Counterintuitively, we’re most likely to enter into debate with people with similar views to our own, not those who we perceive as being different and who can offer an alternative world view.

Worst of all, if much of your social media following is made up of automated “bots” primed to repeat, circulate and amplify particular messages – as seems likely in Trump’s case – then the volume of echoes increases exponentially. The result? Political opinions are polarised, with completely fabricated stories more widely shared (and believed) than genuine news.

These patterns are strongest among more ideologically motivated groups, especially those on the political “fringe”. While less partisan audiences still look to the mainstream media, the agenda of the mainstream media is nonetheless shifting in response to fringe groups’ online interactions. As mainstream outlets report on social media trends, they amplify stories that originated in fringe groups, particularly when the stories reflect their ideological stance.

Crucially, fact-checking disputed stories does not help. Fact-check articles are less influential than the stories they attack, and can actually help disseminate falsehoods to audiences who are prone to misremember them as fact. More than that, merely fact-checking articles on fringe topics only makes those topics objects of mainstream discussion.

Fears about particular outlets’ “propaganda” stories are misplaced, since those stories generally only influence self-selecting “fringe” groups. What’s really concerning is how these groups repeat and amplify their preferred messages, and how their efforts influence media agendas and shift the parameters of political debate. With trust in the media declining fast, people are increasingly consulting partisan alternatives.

That not only opens the field for players like RT, but polarises social discussion to the point of outright conflict. And as recent events in Charlottesville, Virginia prove, that conflict is not confined to the online world.