LATEST NEWS
Home Broadcasting Radio ‘We need to listen to each other’: Tumi Morake after on-air comment furore

‘We need to listen to each other’: Tumi Morake after on-air comment furore 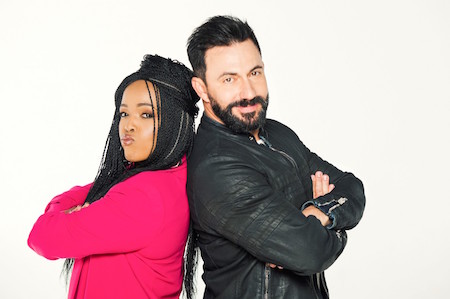 Jacaranda FM has voiced its support of Tumi Morake and the presenter has issued a statement around her on-air comments.

The radio station found itself in the midst of a social media storm lately after comments made by its morning breakfast show host Morake were deemed by some to be racist.

In a statement posted on its website, Jacaranda said, “With this diversity in mind, we never intend to offend or alienate a single listener but this is a delicate, and at times impossible, balance. This is because, while we are a ‘mostly-music’ station, it’s our responsibility to be a constructive platform for conversations that matter to our community.”

Jacaranda FM’s owners, Kagiso Media, has also come out in support of Morake. In a statement, Mark Harris, CEO of Kagiso Media Group, praised Morake for her bravery in willing to discuss such issues as well as her respect in terms of opening herself up to listen to alternative views.

“Kagiso Media must congratulate Tumi Morake for not just expressing a legitimate point of view on the impact and result of Apartheid, but also having the willingness to engage and listen to contrary views. She does this despite criticism, intimidation and threats from some parties in our society,” part of the statement read.

It added, “As a media company, Kagiso Media is determined to engage all stakeholders in order to build racial and social harmony, without fear or favour. This is the role of a media company and the values that have allowed us to build our brand and reputation in this country.”

At the same time as Jacaranda issued a statement, Morake finally broke her silence about the matter with a post on her Facebook page. This is what she had to say: 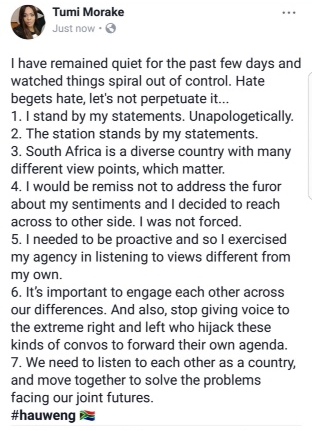 Nevertheless, Morake’s statements were reviewed against the company’s editorial guidelines, Jacaranda said, as well the Broadcasting Code of Conduct and the company’s values.

“While the comments have clearly been construed by some of our valued listeners in a way that has caused offence, hurt and anger, this was not the intention, and this is regrettable,” the station said.

“However, Tumi Morake has our full support at this time, as have Martin Bester and Rian van Heerden and other staff who have found themselves at the forefront of this issue.

“As it stands, we believe the statements do not contravene our policies, and we are further satisfied that via all of our platforms, many have had the opportunity to present differing viewpoints. Simultaneously, the content has been referred to the BCCSA and we look forward to their input, and have commissioned our own external analysis to add to the learnings.”

Morake’s comments resulted in one Pretoria advertiser, Eric Barnard Meubels, withdrawing its R100 000 a month advertising from the station.

Manager and director of the furniture store, Marius Barnard, told the HuffPost SA, “Comments made by that lady [Tumi Morake] are very racial and political … I cannot associate with a station that takes one side”.

But his actions had an unexpected result: Many South Africans vowed to boycott the store.

My Afrikan people, in support of Tumi Morake, we should boycott Marius Barnard furniture store and associates. //t.co/Y3bkepEipb

What our readers had to say

The Media Online’s Facebook page was flooded with comments from our readers giving their take on the matter. Here is what a few of them had to say: 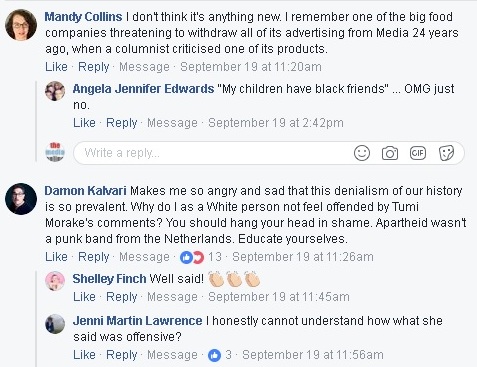