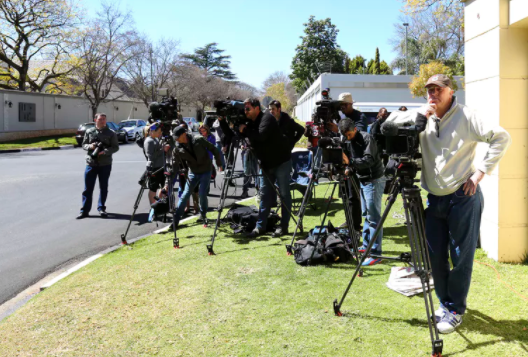 Media Freedom Day in South Africa marks the day in 1977 when the apartheid government banned two newspapers – World and Weekend World – and a church journal, Pro Veritate, along with 18 black consciousness organisations. A number of journalists were also detained.

One purpose of commemorating the day is to keep the memory alive so that people are more sensitive to contemporary trends that may again lead the country down the path of repression.

First some optimism: South African citizens would not have known the extent of the mess the country is in had it not been for the tireless efforts of investigative journalists that uncovered widespread corruption, brought the Guptaleaks and exposed Bell Pottinger’s complicity in stirring up racial tensions.

But that’s where the good news ends.

Media freedom continues to face external threats in the form of legislation, intimidation, harassment and surveillance.

Another major area of concern is that the South African media is not diverse enough: Not in terms of ownership nor diversity of perspectives. This lack of diversity makes it harder for the media to claim to represent the public.

Even worse, the only significant “change” to media ownership this year turned out to be a cynical ploy to buy influence. This was the “purchase” of the Gupta-owned television station ANN7 and The New Age newspaper by their staunch defender and erstwhile government spokesperson Mzwanele Jimmy Manyi. All it achieved was to give media transformation a bad name.

The country is also on the back foot when it comes the public broadcaster. South Africans are supposed to have one that works in the public interest and acts as a countervailing force to big commercial interests in the media. But the South African Broadcasting Corporation (SABC) has been a mess for several years, hobbled by financial woes and mismanagement.

Political interference in the running of public broadcaster runs all the way to President Jacob Zuma. After sitting on the recommendations for the new SABC board for weeks, the board he finally appointed included a controversial chairperson and deputy. He also appointed yet another minister of communications, the seventh in so many years, suggesting that communications just isn’t a priority for government.

But threats to media freedom don’t always come from the outside, from security agencies or politicians. Media freedom also gets hollowed out in more subtle ways. Even if all the usual threats were to be solved, the questions remain: What does the South African media do with its freedom? How well does the media serve the interests of all the country’s citizens?

One of the consequences of having had to fight so hard to protect the space for a free media in post-apartheid South Africa has been that the media has defined its primary role in relation to government, often in a highly antagonistic way. But being a watchdog is only one possible role for the media. It could also play others: A facilitative role that fosters dialogue with civil society, a radical role that opposes authority or a collaborative role that creates partnerships between media and the state around shared interests.

The problem with the media’s watchdog work is that it’s tended to foreground issues that are mainly of interest to an elite. This is partly because of increased commercial pressures on legacy media (newspapers, radio and television). As elsewhere in the world, South African audiences increasingly move to free, digital platforms, disrupting legacy media’s business model as they go. The combination of a media oriented towards lucrative markets and focused almost exclusively on monitoring government, can present a one-dimensional view – or a “view from the suburbs”.

Research shows that the South African media often doesn’t succeed in gaining the trust of audiences outside of the mainstream elite, such as the poor or the youth.

The disconnect between mainstream media and audiences on the margins of society is perhaps best illustrated by the way media report on community protests, which are routinely covered only insofar as they present an inconvenience for the middle classes. Attempts to engage with protesters, find out why they were protesting, why they don’t opt for other forms of engagement and what has led to the breakdown in trust, are rare – partly as a result of constraints on journalists.

By adding to the marginalisation of these citizens, the media is in danger of being associated with narrow or sectarian interests.

Importantly, it needs to be borne in mind that media freedom exists not only for the media but to serve all citizens. The South African media have done exemplary work on many fronts in recent years. Yet, for media freedom to become deeply entrenched in the country’s democracy, it should strive to listen even more widely and more intently to the voices of those that are still not within earshot of the mainstream news.

In doing so – especially in a communications landscape awash with propaganda, fake news and spin – the media would gain the trust of citizens and find more allies in their much-needed resistance to the creeping authoritarianism in South African society.