Zuma and the gangsters: How publishers kept explosive investigation secret 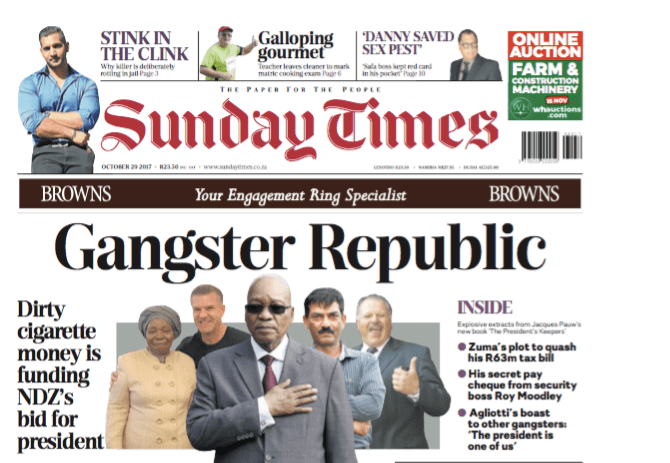 The first hint that the Sunday Times had an explosive scoop was a teasing tweet of a street-pole poster on Saturday night: Tomorrow: Zuma and the gangsters. On Sunday morning, the newspaper’s front page said it all: Gangster Republic it shouted from the newsstands, online and across social media platforms. 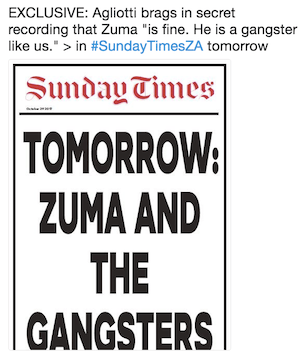 Top investigative journalist Jacques Pauw, the man who exposed the Apartheid death squads, had done it again. But instead of the story being published in a newspaper, it came out as a book, provocatively titled, The President’s Keepers. But how the hell did the author and his publishers keep this story so quiet? Not a word leaked that a book containing (more) shocking allegations about President Jacob Zuma was about to be published. His securocrats would surely have found a way of silencing such a story had they known.

Former journalist Gill Moodie, now a commissioning editor for Tafelberg, an imprint of NB Publishers, picks up the story, “Jacques and I are friends. He gave me his first two chapters to read and I knew immediately he was on to something very big. He is a master of the long-form narrative and digging up the dirt is in his DNA,” she told The Media Online. Moodie says Pauw started writing the book at the beginning of this year, but in reality, she says, it is the culmination of many years of investigative work. “Jacques first started looking into the State Security Agency’s PAN network about six years ago when he was with Media24 Investigations,” she says. 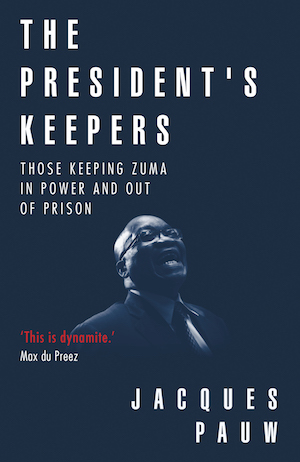 The President’s Keepers follows the publication of other books exposing the rot at the centre of the state. “From KwaZulu-Natal and the Western Cape to the corridors of power in Pretoria and Johannesburg – and even to clandestine meetings in Russia. It’s a trail of lies and spies, cronies, cash and kingmakers as Pauw prises open the web of deceit that surrounds the fourth president of the democratic era,” Tafelberg says in its publicity material.

“The only good thing you can say about Jacob Zuma’s compromised administration is that it has spurred our journalists to go further, push harder to investigate the rot,” says Moodie. “The news revelations of the past year – for example #Guptaleaks – and books – for example, Rogue, Republic of Gupta, Blood on their Hands – have done so much to shine a light on our gangster state.

“I’m very proud that Jacques and we, at Tafelberg, could contribute to this important body of work. I think the newspaper, online media and book-publishing industry are all stepping up in a courageous fashion. What’s that about the pen being mightier than the sword?”

Moodie says the big challenge was to keep it absolutely hush-hush, and still come out with a big bang.

“We had to think strategically and hold our collective nerve. No copies of the manuscript or the book, which were kept in the safe at our office, were allowed out of our office. All paperwork concerning the book and proofs were shredded as soon as we were done with them. All emails were deleted immediately and routinely. Because the book title tells you what the book is about, we had a code word – or fake title if you will – that we used internally. First The Peacock’s Keepers, which later morphed into The Most Riveting Book of the Year,” she explains.

But about two months before they published, Pauw became aware that the State Security Agency was asking questions about the book. “… I felt we couldn’t afford to be naïve about what we were up against. We also had an excellent lawyer, Willem de Klerk, and consulted senior counsel, Geoff Budlender, who worked through the legal issues and implications carefully with us. They underlined the necessity to keep the book utterly confidential to avoid an interdict to stop publication,” says Moodie.

How on earth did Tafelberg keep the secret AND still get shops to buy stock?

Moodie explains: “The booksellers didn’t know the title of the book, and we didn’t circulate the cover to anyone. We only told them it was ‘Jacques Pauw’s next big political exposé’. Jacques’s reputation precedes him, and almost everyone understood this was hot property,” she says.

“Benjamin Trisk, the CEO of Exclusive Books, drove to Riebeek-Kasteel (where Jacques lives) to chat to him about it. He also kept it utterly confidential, but vouched for the book: He told the managers of his shops that it was a big book. When we were ready to distribute, the boxes of books were sealed with embargo stickers on them. The shops could only open them at one minute past midnight on Sunday. And everyone abided by the embargo! It went seamlessly so we were over the moon.”

Selling books goes hand in hand with a publicity campaign. Moodie says the campaign for The President’s Keepers was planned “carefully and with military precision”, and teamwork of course.

“Our excellent publicity department planned it all out beforehand. Initially they merely told the media that something big was coming by Jacques Pauw – but no more details. Everything – covers, press releases etc – were sent out by our team at one minute past midnight on Sunday, and our social-media team was ready to run with it. Justice Malala was the first ‘big’ tweet at about an hour past midnight, and it gained momentum from there. It was very exciting,” says Moodie. 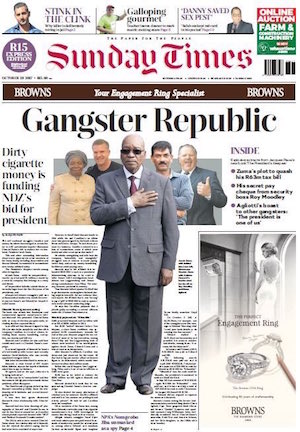 Of course, a Sunday splash was needed too. “We knew that we’d need to give an exclusive to the most impactful Sunday newspaper so we could set the news agenda for the week ahead. We decided the Sunday Times was the best. I am an ex-Sunday Times-er, and worked with editor Bongani Siqoko at the Daily Dispatch. Bongani came to the party in the most brilliant, professional way. Because we did not want to give copies of the book out, he flew to Cape Town to meet Jacques and myself, and plan things. Because we wanted to keep it close, we decided that I would edit the extract down; Jacques would write the news story. Only a close circle of people in production at the Sunday Times worked on story and extract.”

A story that dug so deeply into Zuma’s gangster cronies had to involve whistleblowers, who would be at risk from the dangerous characters exposed in the book, both in and out of government. Moodie says Pauw told them of the risks. “… we are very grateful that they had the courage to help him blow the lid off what is happening in our country,” she says. “Jacques is fearless, and it’s not his first rodeo. However, it is also for this reason that we had to keep everything so quiet.”

The reaction to the book and Zuma’s secrets it exposed exceeded their expectations. “When you work so closely on something, you can get sucked into the detail. We knew this was going to be big, but were wow-ed by the bombshell it became. The Sunday Times treatment – ‘Gangster Republic’ – on the front page was brilliant!”

The initial print run was 20 000 books, but they sold out in the first day. Moodie says on Monday, shops were ordering more so a second run of 10 000 books is in the works.