LATEST NEWS
Home News Mokonyane, the new communications minister in the headlines for all the wrong reasons

Mokonyane, the new communications minister in the headlines for all the wrong reasons 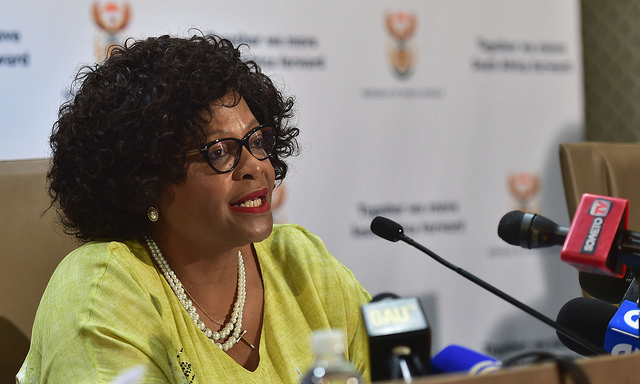 
The analysts were convinced: Nomvula Mokonyane was facing the axe, as newly-minted president of South Africa Cyril Ramaphosa, prepared to announce a new cabinet.

But Mokonyane has been appointed minister of communications, the minister in charge of ensuring we meet another digital migration deadline in 2019 (and let’s be realistic, 2019 is an election year, which means certain ministers will be more about campaigning than actually delivering on their mandates).

William Bird, executive director of Media Monitoring Africa, points out that Mokonyane is the fourth minister of communications in less than 12 months.

“While we appreciate that the president has agreed on a review of cabinet overall, we had hoped one of the first critical steps would have been the convergence of the departments of post and telecommunications, and communications. Not only would this have been an important and essential step to try bring stability to the sector, it would also have been in line with the ANC’s own resolution and would have helped reduce the size of cabinet,” he said.

“Instead we find ourselves with the fourth minister of communications in less than 12 months, and with a person who has been in the media for all the wrong reasons and with some really damning allegations hanging over her head.”

Huffington Post editor at large Ferial Haffajee’s reaction was succinct: ‘WTF! Dlamini, Gigaba And Mokonyane Back In Cabinet. How Did That Happen?’ Her answer was pragmatic: “Politics happened, that’s what”.

“Mokonyane has, by all accounts, quickly changed her march to support Ramaphosa. She checks in regularly with the president and her changed stripes earned her a huge promotion. It is not the wisest appointment as the communications ministry requires a strong technocrat to finally help South Africa make the jump into the digital universe that six ANC ministers have failed to achieve,” Haffajee wrote.

But it’s highly unlikely Mokonyane is the “strong technocrat” the job requires. Her handling of a department that is crucial in delivering not just services, but dignity, to millions of disadvantaged South Africans, has been less than stellar. As Gauteng premier in 2013, she told protesters in Bekkersdal, “People can threaten us and say they won’t vote but the ANC doesn’t need their dirty votes.” They had the cheek to complain of appalling service delivery and booed her when she addressed them.

Her role under Zuma

A snapshot of her role in former president Jacob Zuma’s cabinet isn’t reassuring. She took her role as head of the ANC’s elections committee very seriously – to the detriment of her role as water and sanitation minister. It was on her watch that the Cape Town drought crisis spiralled out of control while she failed to heed warnings it was a disaster waiting to happen.

She is personally responsible for delaying the second phase of the R22 billion Lesotho Highlands Water Project to 2025, as well as inflating the budget. Her reason? She wanted more black-owned companies involved. City Press reported that a single company, LTE Consulting, was awared R5 billion worth of contracts in one year. LTE donated R3.5 million to the ANC in just two months, May and June 2016, just a few months before the crucial 2016 local government elections.

The Auditor General found the department of water affairs and sanitation had spent a whopping R2.5 billion on… well, “fruitless and wasteful expenditure”. As EWN reported, “The bulk of the R2.5 billion in irregular spending was due to a company contracted by the Lepelle Northern Water Board failing to abide by the Water and Sanitation Department’s tender rules.

“Mokonyane gave the water board the green light to contract LTE Consulting during the water crisis in Limpopo’s Mopani district municipality in 2014.”

She was unconcerned that after one of Zuma’s reshuffles the rand went into a tailspin, plummeting in value. The minister blithely told the nation not to worry as if the rand fell, “We will pick it up”.

An ardent defender of Zuma, despite his multitude of scandals and efforts to enable the Gupta family and his son, Duduzane, to strip the state of its assets, Mokonyane once slammed his critics, saying an attack on him was an attack on the ANC. “The attack is not on Zuma, but it is on the ANC. Re tlo thiba ka dibono [We will defend with our buttocks],” the Sowetan reported.

Despite a reported R1-billion budget to fight the local government elections in 2016, the ANC lost three metros and was forced to govern in coalition in several other municipalities.

Which brings us back to the 2019 elections. Twitter, always a hotbed of conspiracy theories, reckons she’s in communications to take back the SABC just as it’s been showing green shoots of independence and truly fulfilling its mandate as a public (not a state) broadcaster.

Taking back the SABC?

DA shadow minister of communications, Phumzile van Damme, responding to a tweet speculating on this, said: “So lit. The target is the SABC board ahead of 2019 & re-capturing it after it finding its voice & maintaining its independence. Not on my watch. I’m ready for battle.”

On news that Mokonyane was the head of communications, Van Damme tweeted, “Nomvula Mokonyane. Woe is the Communications sector. Aluta!”

Bird’s response to this? “The cynic in me says this may be an attempt to regain control of the Sabc. The optimist in me says it doesn’t matter even if she tries the courts will rule in our favour and the department will soon be merged. So she isn’t likely to last, especially if some of the stories we have seen about her role in water go further.

“The reality is we still have the best chance for an independent SABC. And we will fight with every thing we have to build on that and not let it go down.”

Mokonyane is Gauteng born and bred, growing up in the West Rand township of Kagiso as the youngest in a family of 12. She began her political career as a student activist, and is a founding member of the Congress of South African Students (Cosas). She was publicity secretary of the UDF’s Krugersdorp branch. She was harassed and detained by apartheid security police. After several roles in the Gauteng Legislature after 1994, she became Gauteng’s first female premier when Jacob Zuma became president in 2009.