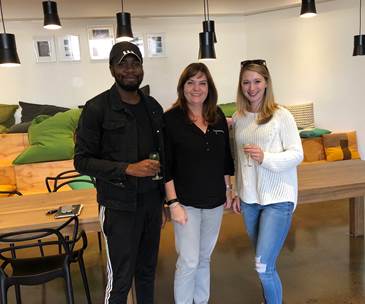 
Publicis’ Prince Zwane and Kaylee Germann are set to roar at the Cannes Lions International Festival of Creativity in June after winning the South African leg of the Cannes Young Lions competition for 2018.

The pair had just two days to create a 60-second commercial, from brief to concept shooting, editing to final production. The pair will also compete in the global Cannes Young Lions competition in the Film category, which follows the same 48-hour format.

“I was impressed by the innovative thinking. The future of advertising is in good hands,” said judge Molefi Thulo, creative director at Ogilvy South Africa.

Besides the trip to Cannes for the festival, Zwane and Germann’s commercial will also be flighted in Ster-Kinekor cinemas, and will be used by Ster-Kinekor’s CSI programme, Vision Mission, to continue to drive eye care awareness.

The Cannes Young Lions competition for 2018 is currently underway around the world. Here in South Africa, the Cannes Lions festival’s local representative, Cinemark, announced its participation in this year’s event, with its sponsorship of the film category.

“We are proud of the outstanding work that these two young creatives have produced, this is a once in a lifetime opportunity that we are giving Prince and Kaylee to be able to compete globally and represent the South African creatives,” says Lynne Wylie, head of marketing: retention of Ster-Kinekor Theatres. “This is an amazing experience and we look forward to following their Cannes journey with them in France.”

Maps Maponyane, TV presenter, actor and entrepreneur agreed with Wylie. “I had an amazing experience as part of the judging panel, being able to experience a creative brief through of the eyes of South Africa’s young creative talent. Overall, the entries were impressive, but there were few that stood above the rest in all categories, simply executed and conceptually very strong,” he said.

Second place went to David Blakey-Milner and Daniel Edwards from Wunderman in Johannesburg, with third position going to Tarryn Prior and Devaksha Vallabhjee from Ogilvy South Africa at the Cape Town office.