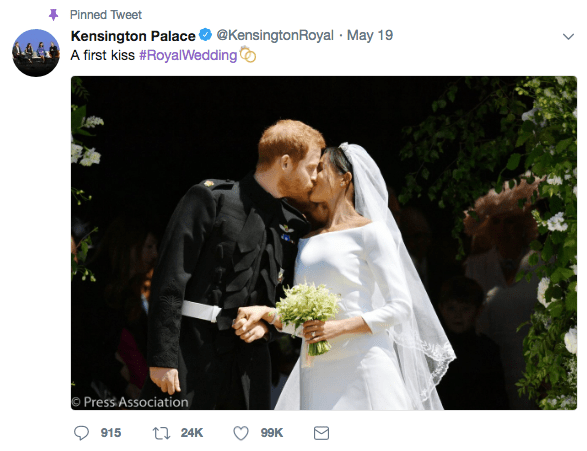 Back in 2011, just ahead of the wedding between Prince William and Catherine Middleton, The Media Online ran a story, headlined ‘No tweeting in the Abbey’ about how social media would be managed on the big day.

“Guests in the Abbey should be concentrating on the wedding, not [using social media],” head of communications for Westminster Abbey, Duncan Jeffery, told The Media Online. While it would not be ‘practical’ to try to enforce a ban and have offenders ejected, “frankly, I would hope that people realise the importance and solemnity of the occasion – that it’s somebody’s wedding, not a Hollywood press conference. We’re relying on the good taste of the guests”.

Seven years later, and the wedding of Prince Harry to American actress and social justice activist, Meghan Markle, was billed as the social media event of the year. With a wedding that beautifully melded Hollywood glamour with royal tradition, social media was an integral part of the experience – albeit NOT inside St George’s Chapel in Windsor.

With a slew of celebrities – from Oprah and George and Amal Clooney, to Posh and Becks and Idris Elba and James Blunt, and the cast of Suits – in attendance, and the cult of selfies and Instagram entrenched, it wasn’t surprising that Markle’s best friend and stylist, Jessica Mulroney, as well as friends such as Priyanka Chopra and Serena Williams, couldn’t resist posting the odd pic from Frogmore House, venue for the reception.

Twitter broadcast the wedding live. #RoyalWedding is happening, LIVE on Twitter, it announced. “Experience the ceremony, the fashion, and the conversation all in one place, right here on Twitter. Watch full coverage of the all-day event beginning tomorrow at 1am ET.”

Within 24-hours in the lead up to the wedding and the marriage itself, Twitter reported 3.4 million tweets. By Sunday, 6 604 498 tweets had been posted, 5.2 million using the #RoyalWedding.

At William and Kate’s wedding, there were 1 821 669 tweets within the same timeframe.

Twitter’s official statistics reported that Bishop Michael Curry’s rousing sermon on love generated 40 000 tweets a minute. The glorious rendition of Ave Maria by Sheku Kanneh-Mason performing Ave Maria on the cello saw with 28,000 tweets per minute while Prince Harry and Meghan Markle being announced as husband and wife racked up 27 000 tweets per minute.

Social media analytics company, Talkwalker, generated an interesting list, drilling down to specifics. It reported Bishop Curry’s sermon and the Kingdom Choir’s beautiful rendition of Stand By Me, saw social media light up with 233 000 mentions.

Jon Laurence, deputy editor of social-news publisher NowThis, told Variety there’s a “seismic shift in how the royals relate to digital audiences. Harry was one of the first digital-first royals”, he said, adding, “There’s less of a stiff upper lip… It’s a sea change that makes them more relevant to our younger audience”.

As the BBC pointed out, social media has forced traditional news organisations to be more nimble. “We have to be more nimble, because we are going to be so conscious of what the public is going to be sharing on social media,” BBC World News’ Lucy Hockings told Variety. “As a presenter, I have a script in my head of how things could go, but on the wedding day things could go differently. It makes it more exciting and interesting.”