Exploring the city’s hidden gems through the eyes of Instagrammers 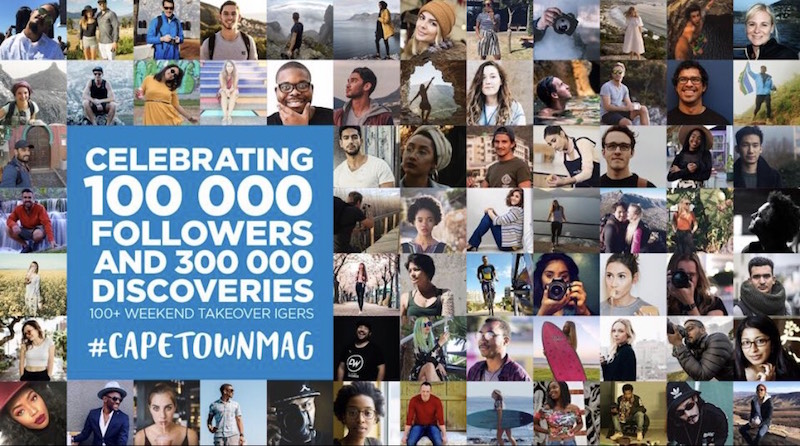 CapeTownMagazine.com celebrated 100 000 Instagram followers on Thursday night… and launched a quest to find “100 million Cape Town Discoveries for the World” over the next year.

The popular online magazine celebrated with an Instameet of over 100 of Cape Town’s most special Instagrammers who’ve been curating its weekend feed over the past two years.

Founder Marc Zandhuis says the ethos behind CapeTownMagazine.com is “We are because of others”. That’s why its focus is not just on discoveries, but also on the people who make them.

“We’re looking for locals or visitors interested in discoveries. And often the discoveries are as big for locals as they are for visitors. The images might look generic, but if you look you’ll see we’re sourcing/curating images of many lesser known or unknown special places. IG stats are not detailed enough to see or compare local and international reach to previous years,” he says.

Social media executive, Razaan Kamish, explains how “the smallest hidden discoveries often make a city. And people make a city. Just like CapeTownMagazine.com, Instagram is one of the rare places that are a 100% positive environment”.

And that’s why Cape Town Magazine is challenging residents and visitors to celebrate their “best little hidden gem experiences with #capetownmag so @capetowmag can feature them”.

Zandhuis says images on the @capetownmag Instagram feed are seen over one million times a week, which adds up to 50 million times over a year…and they’re aiming to double that. “We’re aiming to grow to 100 million views…. We’re planning special campaigns to activate themes and special events with our IG weekend takeover Instagrammers. Expect video to start playing a bigger part with the IGTV that launched last month,” he says.

South Africa, the US, Germany, UK and The Netherlands are the source of most followers. Zandhuis reckons when he travels, he uses Instagram first, looking for relevant hashtags to follow. In terms of its impact on tourism, he says Instagram has 800 million users, and that people engage with the channel ten times more than they do with Facebook.

It’s taken the magazine “roughly” three years to build its powerful following. “In 2016 we played around a little and started with the ‘we are because of you’ and ‘feature the IG-er’ concept as well as intelligent hashtag usage. All of this enabled us to grow exponentially from 3 000 to 75 000. In the last 12 months we grew to the 100 000. It was interesting to see is the impressions growing to over a million,” says Zandhuis.

He reckons the IG’ers are “legends”. “Last night was special. A group of over 100 Instagramers from all walks of life came. In terms of curating, our main rules are that we’re looking for real people and we ask them to look for discoveries, noting that often the smallest discoveries are the most special. Furthermore, CapeTownMagazine.com is about curiosity, play, fun, leadership and connected togetherness. We ask them to keep that in mind.”

#CapeTownMag is already the largest hashtag for Cape Town. Almost 300 000 people have used it to indicate they’d love to share their image/discovery with the world. As Zandhuis points out, the functionality that now allows people to follow hashtags “enables us to encourage every person, and all the smallest discoveries in Cape Town and the Western Cape to tag their special pics with #capetownmag so their special discovery can be discovered”.