SABC has ‘significantly reduced’ salaries of executive management, board


[STORY UPDATED] The SABC has “significantly reduced” the salaries of executive management and board members in comparison to those earned when former COO Hlaudi Motsoeneng ruled the broadcaster and its board.

SABC spokesperson Neo Momodu said the figures quoted by the Democratic Alliance (which were published in the broadcaster’s 2016/2017 annual report) bore no resemblance to the remuneration of current executives. The DA’s shadow minister on communications, Phumzile van Damme, had asked whether executives were being paid “Hlaudi salaries”.

The GCEO earned R6.5 million, the CFO R4.1 million and the COO (Motsoeneng) R2.7 million (including an R11 million bonus for the MultiChoice deal). The salaries of group executives ranged from R3.8 million (GE: head of television), to R3.5 million (GE: risk and governance).

“The above moratoria are due to the corporation’s contemplation of invoking Section 189 of the Labour Relations Act 66 of 1995, as has been communicated to all employees and organised labour. We trust that the necessity of these measures is understood,” Thekiso said.

But the SABC has denied it was freezing salaries. It said it had, “despite tough economic conditions and the dire financial situation of the Corporation”, negotiated salary increases with organised labour, which were paid to all eligible employees at the end of September 2018. This particular process, however, was initiated in May 2018 and implemented at the end of September 2018.

In response, Van Damme has urged the SABC to “play open cards with the public and reveal its top management salaries from GCEO to group executives”. She said this was not confidential information, as the SABC is a public institution and their salaries are a matter of public record.

“In order to ease concerns that the upper echelons of the SABC continue to live the high life, while staff face the possibility of retrenchment, the SABC must reveal the salaries for public scrutiny and to confirm that austerity measures do apply across the SABC,” she said.

On Monday, Van Damme called for an independent body to review all SABC top management salaries and place them at market value. “To demonstrate goodwill and unity with staff, top management ought to commit to not only freezing in their own salaries, and not resist any advice to reduce their salaries after the review is undertaken,” she said. 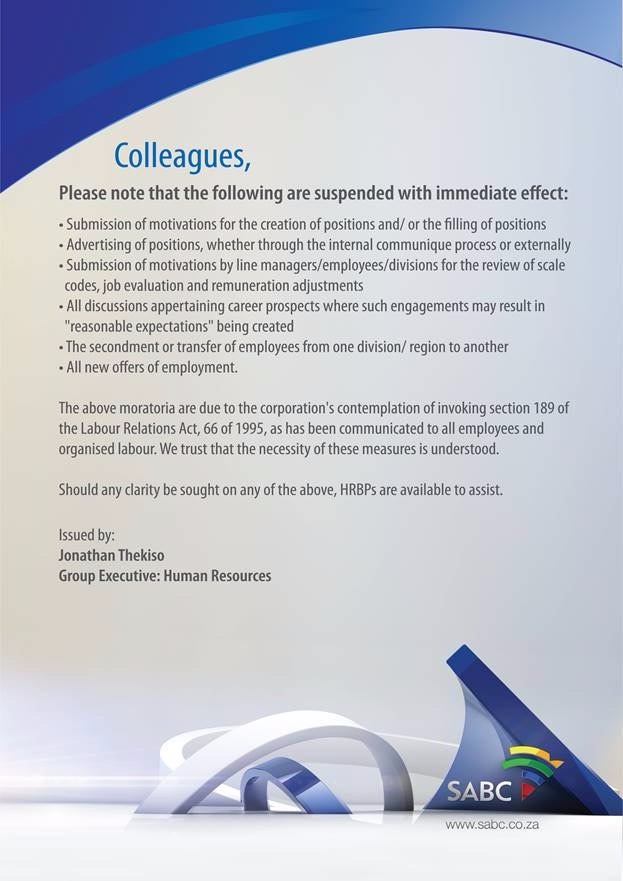