The budget: Five little words about the SABC 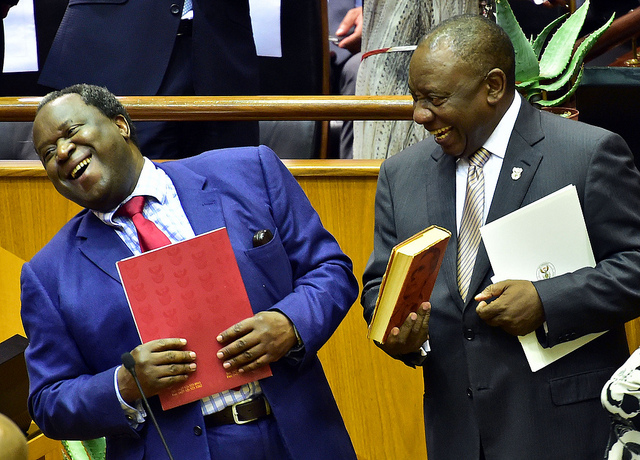 
The SABC is in crisis. Deep, deep crisis. It is about to run out of money and unless they have a government guarantee they won’t be able to pay March salaries. The President, Government departments and Parliament, all know, have known and still know about the crisis, and yet they deliberately fail to act.

You may recall somewhere that the SABC is in crisis, and in your mind, you might even think “ho-hum, what’s new, another crisis?”. You would be correct. The SABC is in crisis. Deep, deep crisis. It is about to run out of money and unless they have a government guarantee they won’t be able to pay March salaries.

To make matters worse, they also have a governance crisis where they do not have a quorate board, so no major decisions can be taken – how delightful, for some, that this occurs just before the elections.

You might also think that Eskom is a bigger priority as they keep the lights on, sort of. How is SABC different to Denel, SAA, Transnet? After all, until recently, they all seem to be managed by people who either have the skill of raw potato or are merely intent on raw self-enrichment.

Those things may well be true, but here’s why you should care, and why you should be angry enough to remember that in a few months, we have one chance of electing a new group people to hopefully act in a better manner.

To begin with, to get the SABC out of the crisis, two critical things need to happen. Government needs to give the SABC a guarantee so it can keep going (duh – it seems all SAA has to do is say “oops, we flushed a few billion down the toilet, again, please can we have some more?” and it magically appears) (It did work for Iqbal Surve, though. – Ed) and they need a board to make decisions. The situation is not like Eskom, where we have no real idea of what the hell is going on, how to fix what’s wrong, or even who can fix what’s wrong, and then split the thing into three parts.

So, simple – “give a guarantee”, “appoint board members”. Five words, again. You should care because, unlike unemployment, land, gender-based violence or energy, we have a really simple set of solutions for big wins.

Here’s why you should be angry: despite knowing these things, our public institutions, the President, Government departments and Parliament – instead of acting to resolve these things – have delayed and prevaricated so that instead of being simple problems, these issues are now at crisis point, and the kicker is they all know, have known and still know, and yet they deliberately fail to act.

On Budget day, we had hoped that the Minister of Finance would announce a government guarantee for the SABC; instead, he sidestepped it in his speech and spoke of curatorship in his comments to media beforehand.

Just on Wednesday, instead of moving swiftly, we witnessed our Parliament portfolio committee on communications not being able to even agree on when they would make the next appointments so the SABC Board can be quorate. They seemed to say, begrudgingly, they would act swiftly.

The inaction of the responsible bodies suggests two things. Either they cannot see the low hanging fruit solutions, in which case we have to seriously question their ability to function as competent human beings, or there is a bigger political agenda at play. It is tempting to pick the incompetent functional moron position, but the most likely is about a bigger political strategy, for we know some of those involved to be astute.

As you read this here on this website, you don’t care for the State Broadcaster. But for the overwhelming majority of people in South Africa, the SABC is a big deal. It is how they get their news and information, how they have themselves, their identity, and their language heard and reinforced. It’s how they will hear about the various parties and what they think and stand for. If you care about social justice, or even if you don’t, if you think it’s only vaguely important to have free and fair elections, the SABC matters.

As we head to elections our government is playing a dangerous game of a combination of brinkmanship and a swinging contest of another kind, with the ultimate aim of controlling the SABC.

Currently, the SABC is doing something pretty damn unusual for a public owned entity – it has senior executives who are not only competent but are hard-working, not corrupt and want the SABC to succeed.

Let that sink in: the competent, highly skilled senior people are running a critical public entity!

But wait, there’s more, these same people even have a plan! We know because they shared it with Parliament – and yes, I’m not just referring to the awful retrenchments, but they have an actual turnaround strategy.

I know you may have heard this kind of magic talk before about Eskom, SAA, etc, but if you look at the SABC over the last year there is real evidence that it is a real plan and bearing fruit.

There have been no scandals, or criminal allegations against the Head of News, CEO, COO, CFO, or even the remaining Board members.

For the first time in as long as I can recall, we saw a Budget breakdown of how much it costs to fund the SABC’s public mandate, and for the first time we have seen an SABC repeatedly stand up for its independence.

Of course, these achievements don’t mean it is all sunshine, roses and lollipops, far from it. The SABC has no money, too many people in middle management, bad structures, a culture of fear still remains, and like any other big institutions, far too many things that are illogical or don’t make sense. But we have real, clear evidence of a plan and commitment to building a critical public institution. It really is astonishing, and should give us hope for our future.

So, it beggars belief that instead of doing all it can it see the SABC rise as a Phoenix from the ashes of Hlaudi Motsoeneng, we see efforts to address the crises being thwarted at every turn.

Those who seek to keep the SABC in crisis don’t only threaten to undermine our democracy, take us to a potential constitutional crisis, and bring into question the outcome of our elections, they also seek to deepen inequality and ensure that the needs of the majority of South Africans are marginalised, that they won’t have access to quality programmes and quality news, and that they are taken for fools.

To those people, shame on you. You do not deserve public office, you are an affront to our Constitution and democracy and we pity you. You may currently have power, you might even win some short-term battles, but ultimately you won’t win. Motsoeneng, with a Board and Minister more pliable than a latex rubber suit, and with threats and intimidation, couldn’t defeat eight people and then the millions of others who rose to support them.

So, to those who are delaying and enjoying the crises and brinkmanship, your days are numbered. You will lose, not because we are foolish to believe that justice will always prevail, but because if State Capture has taught us anything as a nation it is that our media, our justice system and civil society won’t give up our democracy for some power hungry, cretinous thugs.

This story was first published on Daily Maverick and is republished here with the permission of the author.