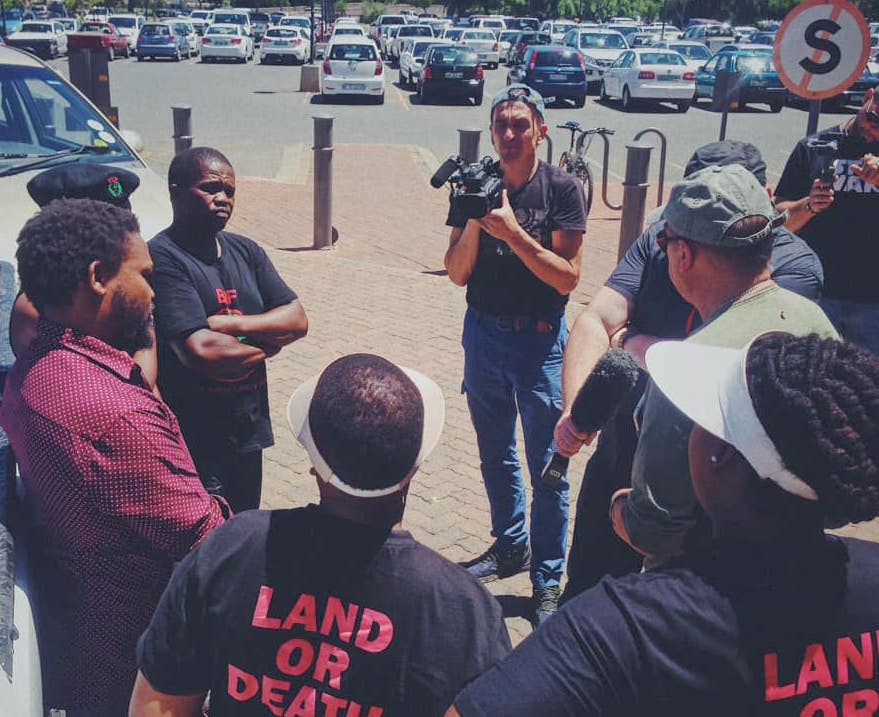 
Fake news, misinformation, disinformation and ‘malinformation’ (malicious information) are already playing a role in communications in the run-up to this year’s pivotal elections.

Fact checking and verification are vital skills in newsrooms, and journalists (and editors) need these tools in their arsenals to ensure the news they deliver is fair, unbiased and factual… especially ahead of elections, when politicians’ relationship with truth and facts becomes even more tenuous.

A story that blew hot air across a number of news sites on Saturday was based on a statement sent out by a marginal party contesting the elections, Black First Land First, or the BLF as they’re more commonly referred to. In it, the party laid the blame for the devastation and tragedy of Cyclone Idai squarely at the feet of ‘white people’.

Members of political parties can of course say what they like. They are entitled to free speech – the onus is on reporters to question, gather further facts, and get alternative views to balance the story, from those with vested interests in spinning their own version of the ‘truth’.

The BLF statement was picked up by most major news titles, including News24.com, Citizen.co.za and TimesLIVE. While News24 led with the BLF statement and it’s headline reflected this, it added facts around the devastation in Mozambique wrought by the cyclone. The Citizen and TimesLIVE ran it pretty much verbatim.

“Allow me to share some of the realities of a newsroom in 2019,” said Charles Cilliers, digital editor of The Citizen. “If we had done as you have suggested [get alternative views], that would have earned us praise, or at the very least, the perception of credibility, from the section of society (possibly the majority) that sees the BLF’s fringe view as scientifically uninformed,” he said.

“However, it would also have seen us being accused of bias, by immediately attempting to debunk what the BLF was arguing by including the views of people or even ‘experts’ selected by ourselves. My content producer decided to just report on what the BLF was saying and allow society to make up its own mind about it.”

Cilliers says the story needed to be run “because the BLF are likely to be represented in parliament and their opinions are therefore relevant, even if many people find them wacky”.

He says by immediately taking what could be interpreted as an oppositional position to the BLF’s statement, “we run the risk of perhaps missing the point that the BLF was trying to convey, which is perhaps not about the current state of global pollution, but the origins of industrialisation itself. As you can see, this is a point for debate, not a simple matter of ‘Oh, let’s call an expert and make them look silly’.”

Caxton Professor of Journalism at Wits, and a former editor, journalist and news editor, Anton Harber, pulls no punches in his reaction to the stories.

“An editor who says it is a freedom of speech issue is abrogating their fundamental responsibility: to select what people need to read or hear, to contextualise and to verify it. Such a person is not doing the job of an editor,” he says.

“The BLF may have the freedom to say any rubbish they want to say, but editors have to think twice about purveying and legitimising such dangerous, racist, attention-seeking nonsense. If one thinks it is worth reporting so that people understand what the BLF is about, then at the very least it should only be done in a way that makes it clear to the audience what nonsense this is. It is grossly irresponsible to carry racist rubbish uncritically. That is not journalism,” he says.

Journalism trainer Raymond Joseph, who is currently running fact checking and verification training around South Africa and Africa, says the BLF statement was news “albeit of the most bizarre kind”. But, he adds, some people are really naive and may well believe it. “Therefore, it’s unacceptable to run it as is without context and a facts-based rebuttal quoting credible sources,” he says

The BLF, in essence, said polluters and destroyers of ecosystems should pay ecological reparations to those countries that suffer the consequences. “It’s no longer speculation – even the white man’s own science corroborates what we blacks know: Africa is paying a heavy price for the actions of the white world. The West pollutes and the West must pay,” the party said. “Africa is tired of carrying the burden of the destructive behaviour of the global white system of power and consumption.”

Like it or not, says Joseph, it is news that the leader of a party standing for election should make such a bizarre claim. “But it needs to be debunked in the same story in which the claim is reported. It also gave media an excellent opportunity to explain climate change with facts and figures, as part of our mandate is to educate,” he says.

Even the most cursory research shows that China is the world’s prime culprit where carbon emissions are concerned, followed by the US, India, Russia and then Japan. By no means all ‘white people’.

“Malinformation is misinformation for malicious intent, as in information which causes harm – but there is an overlap between ‘mis’ and ‘dis’ information with malinformation. There is so much suffering now as a result of the cyclone – it’s convenient for find a scapegoat – and what better scapegoat to find than race. Oversimplifications are dangerous,” she says. “I see it as populism – as in just making statements that are catchy and mean little to catch people’s attention.” But is it news? “I think news websites can run anything they like – if someone says it – it was said. But they should then balance it out with the facts.”

Adriaan Basson, editor in chief of News24.com, says South Africa’s biggest news site is “flooded with press releases” going into the election. The BLF is one such party who issues a number of statements, the majority of which News24 doesn’t use.

“This story was by no means meant to give credence to the BLF’s fantastical claims in it,” he says. “In fact, the opposite is true. The average News24 reader would not willy-nilly accept what the BLF say as the truth. We don’t have the resources to fact check every single political party press release, but in recent months have beefed-up our fact checking ability, as shown in our archives.”

Broadly speaking, the story does not meet the criteria of clickbait, says Joseph, where a sensational headline leads to a story that doesn’t support the headline. “But there is no doubt that the story drove traffic and those who published it knew that it would. I’d hazard a guess that it was among the most read stories on sites that ran it.”

Cilliers pointed to the reality of newsrooms in 2019. It is a fact that many are under-resourced, over-burdened and that, as Daniels points out, sub-editors are in short supply. They would fact check, check if the story was balanced, and ensure a diversity of facts. “Now subs desks hardly exist,” she says. “Every newsroom should have a huge fact checking desk – including subs who check spelling too. You see lots of mistakes in online and newspaper coverage – also on TV – in their captions.”

Joseph agrees. Fact checking and verification should be part and parcel of any journalist’s workflow, irrespective of the platform they publish on, he says. “It should not be something they do sometimes… Online is no different, yet all too often the rush to be first has led to content being published or broadcast without being properly fact-checked, only to turn out to be ‘fake’. Trust is the hard currency of journalism. It is hard earned BUT easily lost.”

Cilliers says The Citizen does its best to offer as many sides to everything as possible, “and to include point and counterpoint, butt and rebuttal, thesis and antithesis in as many articles as we can”.

“We do our best to report the truth accurately and in line with the Press Code (which this article did do) and admit when we don’t know something. We also do follow-up stories/updates on anything we may have gotten wrong or that needs clarification,” he says. “No one in my newsroom comes to work with the intention of spreading untruths.”