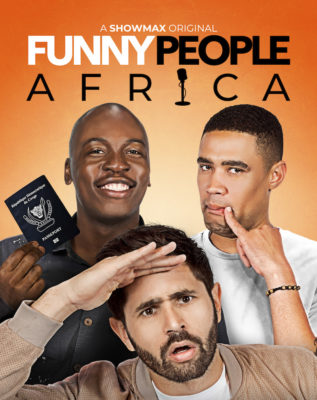 [PRESS OFFICE] If laughter is the best medicine, then Funny People Africa is just what the doctor ordered for South Africa at a time when Eskom is making us all feel sick and tired.

Here are five of our favourites:

Born in the Democratic Republic of the Congo but raised in London, Kadi was named Best Comedy Newcomer at The Black Entertainment Comedy Awards in 2006. Since then he’s sold out the O2 Arena in London, been a presenter on BBC 1Xtra, and appeared on QI, among other achievements. Last year, the BBC hailed Eddie as a “global king of comedy” and asked “Could he be the funniest man in Africa?” Watch him on Funny People Africa and let us know how you’d answer…

Once a lanky, long-limbed actor on the Durban theatre circuit, Robby is now an award-winning comic, loved for his ability to find the funny in otherwise painful experiences. A 2018 Comics’ Choice Comic of the Year nominee, Robby has opened for everyone from Dave Chappelle to Trevor Noah. In 2014 he won the Standard Bank Ovation Award at the Grahamstown National Arts Festival for his first one-man show, That Bushman’s Crazy, and in 2016 and 2017 he was invited to perform at the world’s biggest comedy festival, Just for Laughs, in Montreal, Canada. He was also part of the International Emmy-nominated writing team on Late Nite News With Loyiso Gola.

Glen Biderman-Pam is often the sidekick, whether he’s Rael Rosen, the groom’s best man and business partner in Tali’s Wedding Diary; the barman in #WTFTUMI; or the in-studio comedian in Larger Than Life with Jason Goliath. So it’s great to see him centre stage in Funny People Africa, finding the humour in white guilt and showing why he’s a regular nominee at the Comics’ Choice Awards.

Carl was nominated as the Comics’ Choice Pan African Comic Of The Year for the last two years in a row. To quote Comedy Central Africa, “Carl Joshua Ncube has to be the funniest comedian Zimbabwe’s ever produced.” Carl’s been featured as “the new face of Zimbabwean comedy” on CNN African Voices and has performed in 15 countries on four continents.

Dillan Oliphant
Straight out of Eldorado Park, Dillan won Newcomer Of The Year at the Comic’s Choice Awards in 2012. Having opened for Trevor Noah and featured on the International Emmy-nominated Late Nite News With Loyiso Gola, Dillan has built his brand on deadpan one-liners that make you not only laugh but think as well.

Showmax is an internet TV service. For a single monthly fee, get all-you-can-eat access to a huge online catalogue of TV shows, movies, kids’ shows and documentaries. Start and stop when you want. No ads. Cancel anytime, there’s no contract.