The eclectic election round-up: The stats, facts, where to watch and oh, that free coffee 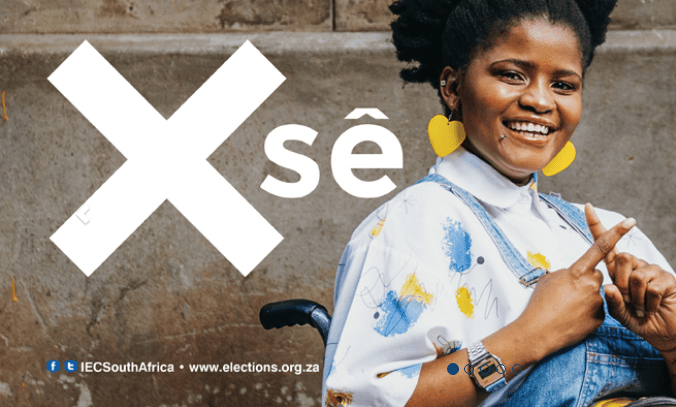 The Media Online’s eclectic election round-up. Stats, facts and all about where to watch, how to find out what you need to know in our media, on our TV screens and phones, and where to get that free coffee… 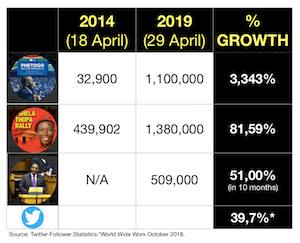 Five years ago, CEO of Co.Lab, Will Green, published an article on The Media Online declaring that 2014 was going to be South Africa’s first digital elections.

“This was an insight gathered by realising that a political upstart named Julius Malema had a larger following on Twitter than the most visible technologically capable politician and then leader of the DA, Helen Zille,” he said.

It is clear that politics is as important to the politicians as it is to the platforms on which they publish their content.

On Twitter, when you combine the parties and their leadership followings it is clear whom has the biggest reach.

Based on historic five year growth, this is the forecasted growth to the next elections in May 2024:

Disclaimer: This independent research was not paid for by any party and was correct on the day of publishing. It was based on publicly available social media data.

allot contributed to the overall makeup of a province’s legislature and, ultimately, the makeup of the National Assembly.

“From an editorial perspective, the data-driven application will augment the quality content generated by Tiso Blackstar journalists who will be covering the elections across multiple platforms, empowering readers to extract valuable knowledge and insights,” it said.

“The IEC has been very forthcoming with support and assistance, which has significantly benefitted the quality of the information the site is able to provide to citizens,” says Goetsch.

The interactive map allows users to zoom in on a province, municipality, ward or voting district, with each view delivering an information panel with the past voting results for the selected election year. As in 2016, there is a devoted section on the website to track what’s happening in the most hotly contested battlegrounds, comparing the latest results with past breakdowns of election data for those areas.

For Media Monitoring Africa (MMA), Election Day will be business as usual, with no special coverage or activities planned. But importantly, this is where reporting of disinformation and monitoring of election coverage takes place, which are both valuable factors.

MMA has been monitoring 120 different media outlets in the run up to the election to see how they have been covering this important event. Within a week, the preliminary findings will be released (keep your eyes on The Media Online for those). This will include such factors as party coverage, gender breakdown, and the major voices being heard.

The organisation has also ensured that The Real 411 portal (where disinformation complaints can be reported) is up and running.

For assistance in discerning fake news and disinformation from genuine information, MMA has several tools for people, including its Rover app, information on the Real 411 portal, and The Political Party Advert Repository (Padre).

Still unsure on who to vote for?

News24.com has a handy quiz outlining various policy positions – anonymously. Pick the policies that resonate with you, and you will get the party that most reflects your policy choices. It can get scary…

The news website has a dedicated elections portal, which gives guides to political parties, and all the latest news, polling, videos, and analysis and commentary.

There’s also a useful section on the various political parties, their people and their policies, as well as an interactive map showing previous results by area.

Live from the IEC floor

Just like any other news organisation, WhatsApp news channel, the Sizwe Mpofu-Walsh Xperience will be broadcasting live from the IEC floor with live hourly updates, including videos, interviews, and photos. Host Sizwe Mpofu-Walsh will be on site for up-to-the-hour coverage.

According to executive producer Roy Mathieu Borole, since its launch in March the channel has conducted over 30 interviews with political guests, with this past weekend being a very busy time in the run-up to Elections Day. As many parties as possible were accommodated (roughly 12 – 15), including the big three (ANC, EFF and the DA).

“We will be at the IEC until about the 13th or 14th May, and after that we’ll take a small sabbatical, and then it’s back to the usual programming,” says Borole.

SABC on the road, on TV, radio and online, and at the IEC’s results centre

The SABC has a dedicated Elections 2019 website, and will be reporting on the poll on radio, TV and online. An operation of this nature needs a dedicated editorial and technical team, it said. The video below gives an idea of what the SABC is doing, with the public broadcaster’s election programme manager, Alan Visser, explaining just what it takes.

As The Media Online reported in April, the SABC has developed and deployed nine hybrid electronic news gathering (ENG) vehicles across South Africa ahead of the May elections that have the capacity to broadcast from the most remote areas of the country. They can transmit video, voice and data on the move.

“This project is meant to bring back the custom of oral tradition which is steeped in African culture, but has largely been neglected,” said group executive of SABC News and Current Affairs, Phathiswa Magopeni. “The independent and impartial approach applied to this storytelling device puts the citizens at the front and centre of the story of South Africa’s democracy, allowing them to tell their stories, share their experiences in their own voices, languages and locations, in a way that reflects the plurality and inclusivity that are central to SABC News’ mandate.”

Studio programming will be anchored by some of the most seasoned television and radio journalists like Sakina Kamwendo, Leanne Manas, Tsepiso Makwetla, Stephen Grootes, Desiree Chauke, Peter Ndoro and Francis Herd.

Nando’s ‘Manifeasto’ for some spicy relief

“In the main spot, we hear our character delivering this declaration to the public and in what follows, honourable members debating these points in parliament… which may or may not be inspired by actual events…”

eNCA on the bus and in town halls 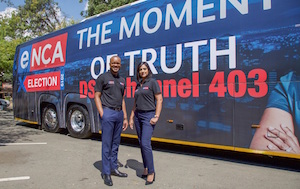 eNCA’s election bus hit the road back in April to find out just what South Africans think about the elections and the state of our democracy. Some lively town hall debates took place too, starting in Cape Town’s Hout Bay where things got a little heated… Watch what happened here. ”

“In partnership with radio station YFM, the Election Bus will get a full picture of what is happening at grassroots level,” eNCA promised, and did exactly that.

Like the SABC, eNCA has a special elections website, and a continuously updated live blog that provides everything from the weather forecast to important Twitter feeds and the latest news.

Then there’s all sorts of useful stuff such as election FAQs, polls, and, of course, videos.

News editors and journalists, a note: The Quote This Woman organisation has a really cool database of women to quote in your stories. “In South Africa, less than 20% of sources quoted in the news are women: our online database of woman+ experts is working to change that,” the organisation promises.

So how about some new female voices? Email kathy@quotethiswoman.org.za

Do women politicians get fair coverage in the South African media? (And please reply to the tweet with your thoughts: if coverage is unfair, why is that? what can be done to correct the imbalance)? #SAElections2019

What Acumen says about sentiment 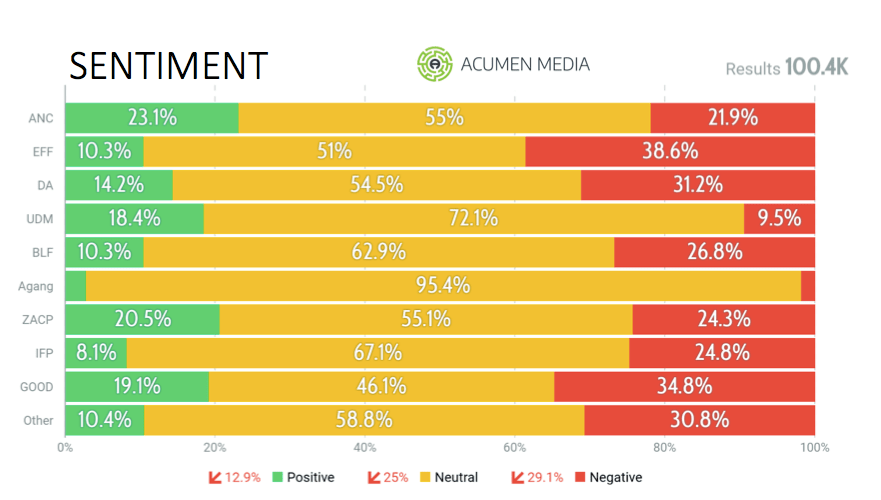 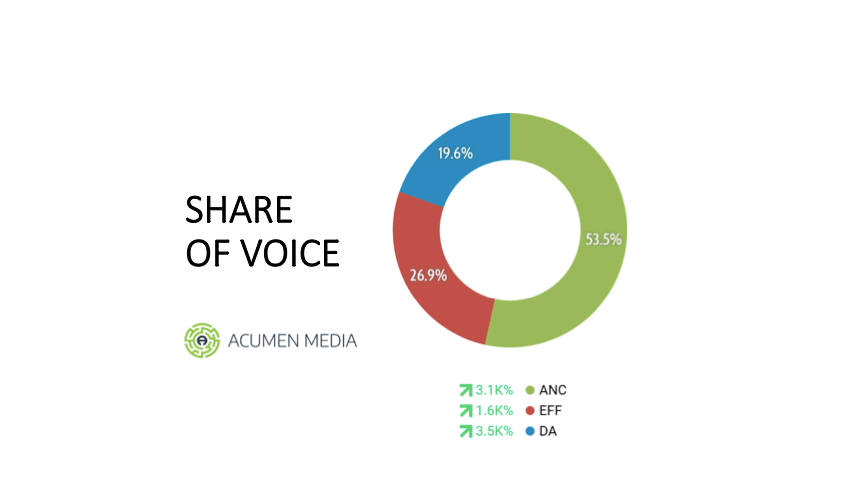 And what about sentiment about the three top leaders? 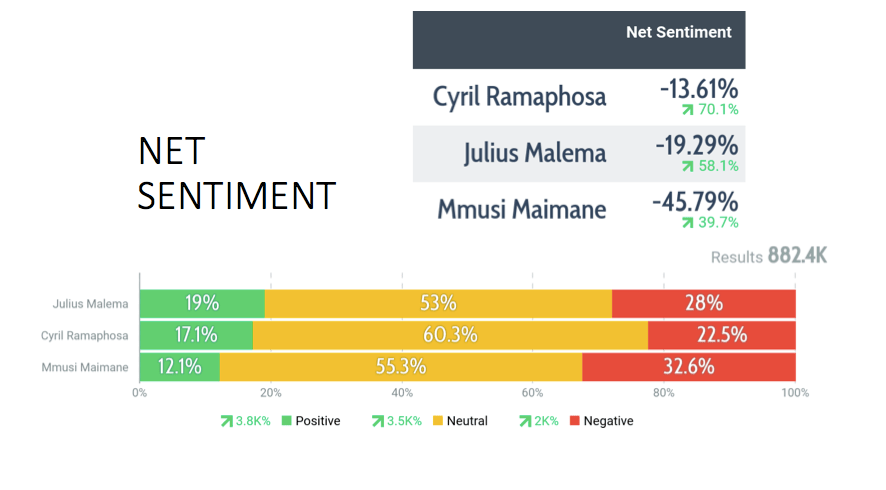 And now for that free coffee… 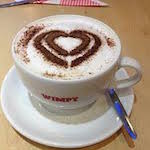 Wimpy is once again giving a free cup of Famous Wimpy coffee to everyone that comes into any of their restaurants across the country and presents their voter’s mark.

“Voting during elections is a democratic right that all South Africans enjoy but most importantly, it’s a responsibility for all in order to actively determine the future and governance of our country. The free cups of coffee that we will be giving to voters on 8 May are a token of appreciation to South Africans that are participating in the country’s democracy. Voting isn’t something that ought to be taken lightly considering the history of our country – hence as a corporate citizen, we encourage everyone to make their voices heard these #SAElections2019,” says Jacques Cronje, Wimpy marketing executive.

This is the second time that Wimpy is rolling out the #CupsForVotes campaign – the first one took place in 2014 and it was well received as thousands of South Africans flocked to the restaurants after voting.

Visit www.wimpy.co.za/locator/ to locate a Wimpy near your polling station and encourage your friends and family to make their votes and thereafter redeem their voter’s mark for a free cup of Famous Wimpy coffee.