LATEST NEWS
Home Press Battles for media freedom being won, but the war is not over

Battles for media freedom being won, but the war is not over 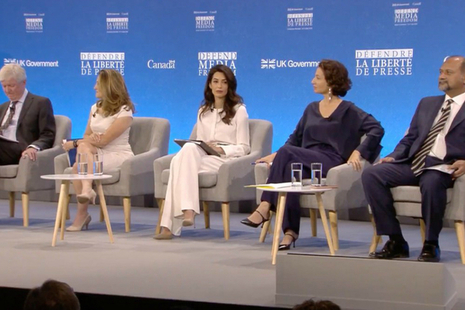 It’s easy to be overwhelmed or feel down about the state of our country. Corruption, abuse, sexism and misogyny – and that’s just our politicians.

These problems extend to our broader national fabric, with overarching issues such as inequality, poverty, the climate crisis and child abuse smearing any glint of hope we might see in our young democracy. But I’m not going to focus on those things now, nor on the parlous state of our public broadcaster and the international embarrassment we face from our government failing to give it a guarantee to stabilise it. Not today.

Last week, Jeremy Hunt, the UK Foreign Secretary, said, “Amid the bleak news, today we are joined by delegations from over 100 countries, including 60 ministers, and more than 1 500 journalists, academics and campaigners. Never before have so many countries come together in this cause.”

The cause he was referring to was media freedom, and I was lucky enough to be at the conference. Thanks to the UK embassy in South Africa, who enabled me to be there, I was able to engage and hear what governments and some of the world’s top thinkers are doing about the issue. It’s not often that media freedom features so prominently on a media conference agenda – usually it is one or two sessions with everything crammed into an hour. So the fact that it was two full days was like being at an all-you-can-eat restaurant with all your favourite foods.

I’m not so naive to think that there was no clear foreign interest being served by the UK and Canadian governments pushing media freedom, but that doesn’t detract from the importance of the event, or the value it offered. While valuable, there was a tendency to veer a little too much to the north in perspective and assumptions.

It was interesting that issues of access to the internet as a facilitative right for media freedom and to help tackle the digital divide were rarely mentioned. But that isn’t unique to these organisers; we saw a similar marginalisation at South Africa’s own recent and cool 4th Industrial Revolution Conference.

Recent efforts to champion the Fourth Industrial Revolution give our nation a target to strive towards. It’s positive, but unless everyone has access to fast, cheap, reliable broadband and we provide critical media and digital literacy skills to all, especially the most vulnerable, we will merely be recreating and deepening our digital divide, and that means relegating our nation to decades more of the same staggering inequality.

It’s not hard to solve these problems. If we can ensure that people get electricity and water we can ensure they get fast cheap broadband. (I know we don’t necessarily do it all the time, but we can actually do it). The benefits of access to the internet are immense and exponential. Just google “access to broadband and GDP growth”.

To realise these essential goals shouldn’t mean we have to sell our nation to the biggest technology providers or foreign national interest. With our incredible Constitution as our lodestar and with commitment we can ensure all people have the necessary digital and media and information skills to see how they can benefit from being connected, and ensure they are able to better protect themselves from some of the concomitant dangers.

But back to the conference. The fact that delegations from more than 100 nations gathered at and supported the conference is hugely significant. Yes, it doesn’t address the duplicity of many of the participants who undermine media freedom, but for media freedom to be a focus of such a global event talks to the perils democracy is facing globally, and seeking a global focus is something we should be thrilled about.

Here are my three key takeaways:

1. We are winning more battles for media freedom on our continent. A session on Africa and media development was run by Unesco. The organisation has been a clear, strong voice for media freedom and its work is paying off as it noted that the trend towards increased levels of media freedom is growing, despite huge threats. The war for media freedom is nowhere near won, but we are winning more battles. The upcoming Declaration of Principles on Freedom of Expression and Access to Information in Africa being developed by the African Commission on Human and People’s Rights has been widely consulted and promises to be groundbreaking for our continent.

2. We are all in the same boat. No matter how wealthy or developed or stable our democracies, or pseudo-democracies, many of the core challenges to media freedom are the same around the world: declining numbers of journalists, and decreases in media plurality and diversity. There are increasing threats against journalists, whether physically, online or both, and women journalists, in particular, are exposed to the most extreme and vile forms of abuse, harassment and threats.

Mis- and disinformation is on the rise, and, whether as part of a clear strategy or poorly conceived, it is a global threat. It undermines not just its targets, but because it tries to ensure that we don’t know what’s accurate or true its impact is to damage our ability to know what is real and what isn’t. If successful it can destroy democracy itself, as democracy is based on the ability of people to make informed choices to vote in their government.

I’m not sure it is positive that we share such similar challenges and threats, except that it means there are likely to be more of us around the world who can fight them together.

3. We ain’t half bad in South Africa. Ironically, despite there being some fantastic speakers, and a fabulously cool declaration, as well as media freedom celebs like Amal Clooney, Maria Ressa, and David Kaye, the highlights for me,  were from our own country.

One of the key outcomes of the conference is an expert legal panel who will look at developing model laws, seeking good global practice and helping to guide governments to act to deepen media freedom. The panel is chaired by a group of amazing legal experts and includes our own Dario Milo. It’s great for him to be there, but it says something about our nation’s calibre of legal expertise that Milo is one of 15.

My greatest highlight, however, was on the second day when I found our own Justice Albie Sachs who had come for a meeting. I had the opportunity to have a coffee with him. Aside from the genius of his mind and incredible stories of our Constitution, what he elucidated so well was how advanced our law in relation to media freedom is in South Africa. Maybe it’s because we are a young democracy playing catch-up, but we have one of the most open justice systems around the world. Our Supreme Court of Appeal set the global precedent on media access to courts and our cases around media freedom are incredible.

I was especially warm and fuzzy after my chat with Justice Sachs about our Constitution, but it soon dawned on me that here in our young democracy we aren’t just a beacon for hope and innovation and promise in the legal arena, but in so many other media freedom aspects as well.

We have entities like Daily Maverick (mentioned many times in conversations with people from around the world), a slew of brave journalists doing their work, a struggling but amazing small commercial and community media sector, a public broadcaster on the verge of becoming a real public broadcast success story, and an active civil society. In the session on disinformation, it struck me how we in South Africa had done something the world could emulate by combatting disinformation around our elections with the IEC and others, such as the Real411.

So, yes, we face massive challenges, but around media freedom we could be a lot worse, and so would our democracy, and while we can and must strive to do more and ensure we have more journalists and better quality media we can be proud that in many aspects the world can look to South Africa not just for hope but for real solutions.

Disclosure: The UK embassy in South Africa covered basic travel expenses and beyond mentioning them in social media no other requirements were made or required. Unesco supported MMA in the development of Real411