Rise above the noise and defend freedom of expression – Joe Thloloe 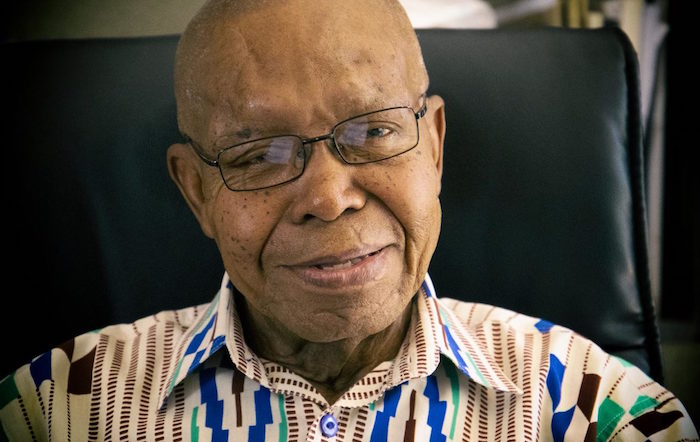 Slight of build, and soft spoken, Bra Joe is one minute early for our lunch interview at noon. He is renowned for his punctiliousness. Thloloe orders fish and chips and later, two scoops of vanilla ice cream for dessert, at the gabled Wits Club restaurant.

Serene of expression, he looks out the window at the oak trees while recalling where he was on the day known in South Africa today as Black Wednesday. On 19 October 1977, a year after the June 16 uprising, and a month after black consciousness leader Steve Biko was murdered in detention, the then minister of justice, Jimmy Kruger, banned 18 black consciousness organisations. These included the Black People’s Convention, SA Students’ Organisation (which Biko founded), SA Students’ Movement, National Association of Youth Organisations and its affiliates, Black Community Programmes, Medupe Writers’ Association, Zimele Trust Fund, Black Women’s Federation, Union of Black Journalists (of which Thloloe was president) and the Association for the Educational and Cultural Advancement of the African People of South Africa. Prominent editor of The World, Percy Qoboza, and some journalists were arrested, assaulted and tortured. When they were released they were slapped with five-year banning orders and placed under house arrest.

You are one of the original journalists from 19 October  1977. What happened on that day? You have been writing your memoirs in recent years – have you recounted this day in detail?

I am struggling with my memoirs. I need to say more than what happened when, I need to say what it all means. The “so what” question. On 19 October 1977, I was in a police cell detained under section 6 of the Terrorism Act. I had been sitting in the cells from the first of March of 1977. I was in solitary confinement with nothing to read but the Bible. Officially I could talk to no one except my jailers. I wasn’t allowed any lawyers.

[Earlier] in 1976 the security police had picked me up from Drum magazine and they locked me up at Modderbee Prison under section 10 of the Internal Security Act (ISA), which said that I would be detained until I stopped being a danger to society. On the day I landed in the cells at Modderbee, I got a letter from Jim Bailey, owner of Drum, dismissing me. His letter said he had been asking me to refrain from politics and I had defied him, and that’s why I was in prison:

“You are now dismissed from the day the police took you from your desk.”

Qoboza sent me a note to say as soon as I got out I should go straight to him because he had a job for me. So, on 1 February 1977 I joined The World, this time as the features writer. On the 1st of March I was again detained under section 6. The beautiful thing about Percy is that when we were detained he insisted that the Argus [Printing and Publishing Company], owners of The World, carry on paying our salaries. He insisted we were innocent until we were proved guilty in a court of law.

On October 19, 1977, I didn’t know that The World and the UBJ [Union of Black Journalists] was banned (I was president). I found out about this only in March 1978 when one of my interrogators said: “Joe, please co-operate… the world outside has changed completely. Your Steve Biko is dead, your Robert Sobukwe [founder of the Pan Africanist Congress] is dead, your UBJ doesn’t exist any more, your newspaper no longer exists.”

I said: “You are lying.” The next day he brought me a copy of the Government Gazette which showed these organisations are now illegal. My jaw dropped. I asked, ‘How did Steve Biko die? How did Sobukwe die?’ And he laughed at me. So, that’s how I got to know about the events of October the 19th. When I was released in August that year, I found out that Percy had been arrested and Aggrey Klaaste [former editor of the Sowetan, who was Qoboza’s deputy and who died in 2004] had been arrested and a few other journalists, had followed my footsteps, to Modderbee Prison. Those years I felt angry and frustrated, helpless.

Could this banning of newspapers and arrests of editors ever happen again in democratic SA?

For now, we are still well protected by the Constitution and the Constitutional Court. The ConCourt has been fantastic in defending media freedom as a cornerstone of democracy. So, for now, while we have the ConCourt these things can’t happen. But the problem is at another more subtle level; it’s the politicians and thugs in the streets and the ordinary citizens who are much more of a danger to media freedom.

Can you comment on the threats to journalists we have today: online harassment and general bullying by political parties, communities and states?

The biggest threat to journalism is the politicians and people on the streets. The truth is that the citizens of this country should be defenders of freedom of expression and media freedom because the work that journalism has done so far has shown how important journalism is. For example, the Zondo commission wouldn’t be there if it wasn’t for the work of journalists.

What about “fake news”? I know you say there’s no such thing – there’s only lies and facts – but what’s going on out there regarding this information disorder, and how do we stop this?

The problem is much deeper than just fake stuff. The world is in the middle of a revolution. Let’s take a step back. If you go to 1996, we were all delighted because of section 16 of the new Constitution, in the Bill of Rights. The point is the revolution was happening in technology. The vision we had in section 16 was becoming real. Everyone had the right to freedom of expression. Everyone has become his or her own reporter, copy editor, distributor, and publisher from his or her cellphone. And so the filter we had before 1996 no longer exists. Everyone is having their say.

And our dream is now real and it’s become a nightmare because the filters are gone. In our schools and universities, we don’t teach the discrimination that’s necessary either to receive or transmit information. The industry is suffering because it’s trying to compete in this noisy environment. This is why newsrooms and skills are shrinking. We are getting drowned in the noise.

Newsroom job losses? Is this a threat to media freedom? Newsrooms have been halved from a decade ago, and we now have more content producers than journalists, subediting desks are decimated and there are no fact-checkers as such. Please comment on the media companies’ responsibilities in media freedom, and do they care?

Media organisations are overwhelmed by what’s happening out there. They still cling to the old business model. They go to advertisers and say, ‘We deliver so many readers, so give us your advertising for our publication.’ That’s the old model. That’s the model that’s collapsed. So, we need a new business model for the media. And as readers, we need to be able to discriminate between bad stuff and good stuff.

I find noise everywhere: on the radio, noise, on TV, it’s noise, on my cellphone, noise, and confusing noises. I need to filter and know what the genuine stuff is, stuff that could help me live a better life. There is a huge place for good journalism. Credibility of publications has become much more crucial. The good will survive.

What about artificial intelligence: can robots be trusted to do the news? In China’s state news agency, Xinhua, the first AI newsreader was unveiled last year.

The robots will never be able to write stories the way we can. They will never be able to put emotions into stories like we can. Again, it’s about who provides real stuff and what’s more credible. In the end, discriminating people will go for the real stuff. People who are using robots to read news are essentially looking at saving costs instead of looking at serving audiences.

Regarding access to information for all and broadband costs — is the government serious about giving everyone access to the internet, and at a lower cost? How much longer can we wait?

That’s our perennial inefficiency – on a normal day they can’t even provide electricity. What they promised in 2008 about digitised television still hasn’t happened.

Then we still have some bills lurking that could become acts: the Protection of State Information Bill (Secrecy Bill) apparently, it’s said that it’s on the president’s desk collecting dust and waiting to be signed. What do you think will happen with this?

It was on Zuma’s desk, remember – it’s probably still lying there. Before Cyril Ramaphosa implements it, he will look at some objections that were raised. So, I haven’t lost hope as far as that is concerned.

And the ANC and its Media Appeals Tribunal?

The ANC is keeping it there as a gogga, to threaten. It’s been a resolution of theirs from 2007 to now. So, every time they meet they endorse it and so it goes till the next conference. To scare the media with. They won’t be able to go forward with it and it won’t pass the Constitutional Court and they know that.

What do you feel about the state of journalism in SA today? What is the biggest media freedom issue?

It’s politicians and people on the street (on social media). I don’t think we have done enough to sell ourselves to our audiences. We don’t pat ourselves on the back sufficiently. If you look at the Zondo Commission, we haven’t said that we are responsible for the revelations. We don’t beat our drums sufficiently. And we need to spread out to reach people beyond the middle classes. We need to do more than preach to the converted with all the great investigation journalism we do; people who read the Daily Sun [the biggest circulating daily newspaper in SA] need to hear about the role of journalism in our democracy.

Joe Thloloe was appointed executive director of the Press Council of South Africa on 1 February 2013 and retired from the position in February 2018. Before that he was the Press Ombudsman in the council for five years.

Thloloe has been in the media industry for more than 50 years, starting in 1961 on The World newspaper. He has also worked for the Golden City Post, Drum, the Rand Daily Mail, Post Transvaal, and Sowetan, where he was deputy editor.

He has also been editor-in-chief at SABC Television News as well as at e.tv.

Thloloe has contributed to journalism training and the development of the media industry in South Africa.