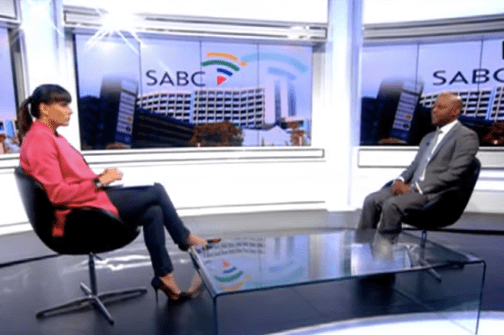 The SABC is on the road to recovery, despite a financially challenging year, its chairperson, Bongumusa Makhathini, has said.

In an interview with Morning Live’s Leanne Manas, he said the fact that the Auditor General had marked its annual report ‘qualified’, up from a ‘disclaimer’ last year, was indicative that its turnaround plan was starting to take effect.

With the injection of a government bailout, which was “imminent”, as the SABC had met all the conditions imposed by its government shareholders, the broadcaster would be able to further consolidate its gains, and importantly, pay the R1.6 billion it owes suppliers, Makhathini said.

The SABC tabled its annual report in Parliament on Monday. It reported a net loss of R482.2 million. While the amount seems staggering, it was actually better than the R1-billion loss the previous financial year, the chairperson said. “This is a 35% improvement,” said Makhathini. The loss comprised, in the main, R400 million on sports rights, an ongoing issue at the broadcaster, and interest payments that were the result of “liquidity constraints”.

Makhathini said the new board and management had “managed to cut R1-billion in costs”. This included reporting on the elections, which in previous years had cost around R80 million, but this year amounted to under R15 million.

He said had the broadcaster received the promised bailout from government, it could have brought down costs still further as it could have avoided the huge amounts of interest on its debts. Once the money comes in, the SABC would “do even better”. It would settle debt, start doing much-needed maintenance, and start looking into content.

Still, the SABC was lambasted for a 63% increase in fruitless and wasteful expenditure, but Makhathini said this was not new, but a result of actions in “prior years”.

The SABC is still battling to overcome years of mismanagement endemic during the reign of former COO, Hlaudi Motsoeneng. It was, for example, trying to claw back R21 million from Motsoeneng with the help of the Special Investigative Unit (SIU).

Motsoeneng, meanwhile, recently gave evidence at the State Capture Inquiry, and bizarrely, claimed the broadcaster owed him R16 million for brokering a content deal with MultiChoice in which the pay TV giant could use its archives.

Asked about the impending rise in TV licence fees, and whether the broadcaster had improved the collection of this income stream, Makhathini said this was looking “positive” due to the public seeing it was addressing issues that plagued it for so long, particularly around governance.

He pointed out that 72c a day was not enough considering the range of radio and TV channels it brought to the public.