LATEST NEWS
Home TMO.Live Blog Solly Mokoetle: From ‘This is Radio Freedom’ to ‘This is Freedom for all Radio’

Solly Mokoetle: From ‘This is Radio Freedom’ to ‘This is Freedom for all Radio’ 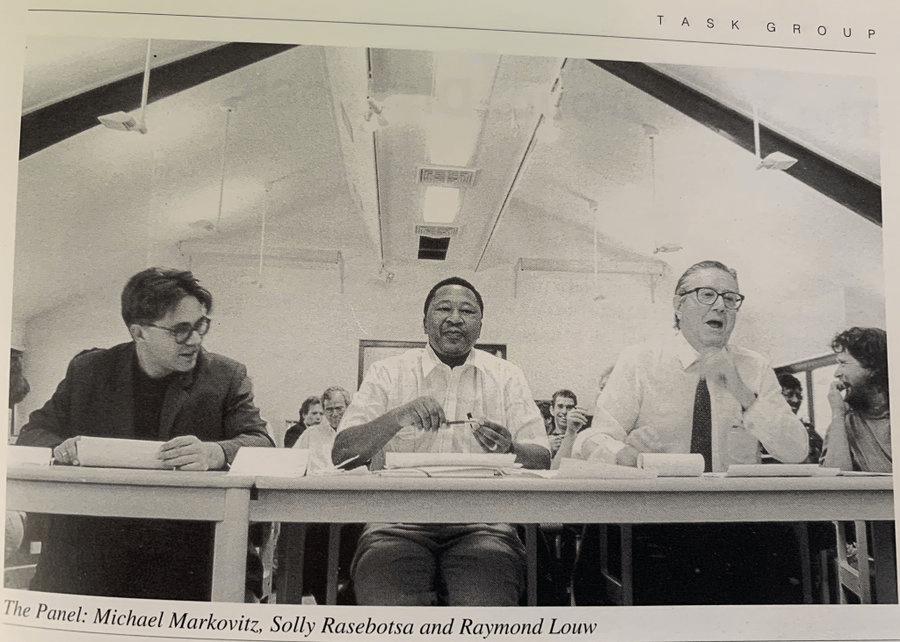 Photo: Michael Markovitz, the late Solly Mokoetle and the late Raymond Louw at the 1991 Jabulani – Freedom of the Airwaves conference in Holland

I am truly honoured to have been asked to say a few words about Solly Mokoetle, on this solemn day when we remember his life and contribution, amidst the pain of his loss.

It is 28 years since I first met Solly and it was not on home soil but in a Dutch trade union conference centre deep in a forest outside a very small town called Doorn, 20 minutes from Utrecht.

The ANC and other political parties had been unbanned 18 months previously and there were discussions with progressive formations across different sectors about what a future South Africa would look like. And the control of the SABC and broadcasting sector soon became a key issue to resolve for the transition to democracy and beyond.

In August 1991 about 50 of us from inside South Africa were selected to meet with the ANC, Radio Freedom and the Dutch Anti-Apartheid Movement to discuss what a post-apartheid SABC would look like and how broadcasting should be regulated.

We were a varied, somewhat eclectic, noisy bunch – political activists, trade unionists, anti-apartheid film makers, aspirant community broadcasters, academics, journalists, lawyers, civil society formations – and we all came together in what became known as ‘Jabulani – Freedom of the Airwaves’. It was the conference which shaped the way forward. Some of those Jabulani attendees are here today and welcome to you as well.

As you will recall, in those years the SABC was a state broadcaster which monopolised the airwaves, and apart from M-Net and a couple of commercial Bantustan-licenced broadcasters, there was no-one else. Apart from Radio Freedom that is. And so it was exciting to meet Solly and his Radio Freedom comrades who were trained in broadcasting outside of South Africa. It was a truly invigorating experience and a real privilege to be able to discuss and debate with Solly and the group as to what the future could look like.

Many comrades in exile had yet to return and had not assumed their real surnames, being understandably very wary with so much uncertainty at that stage and families back home to protect.

And so when we met him he was Solly Rasebotsa. At least that’s what the conference programme said!  But for everyone who knew him he was always ‘Solly’. He really stood out with his razor-sharp intellect – so articulate, so incisive and so argumentative as well!

The Dutch Anti-Apartheid movement had set up ‘Omroep voor Radio Freedom’ in 1982 and had supported Radio Freedom in many ways through training, funds for mobile studio sets; for strong short-wave transmitters and other equipment. As confirmed by the ANC Veterans League, Solly was one of the Radio Freedom comrades to be sent on a half-year course at Radio Netherlands Training Centre in Hilversum during the 1980s, where he acquired advanced techniques in radio production.

By the time I met him in 1991, Solly had already had unique experience in the field working for Radio Freedom in Luanda, Tananarive, Addis Abba and across neighbouring countries, talking to us over short wave, over borders and into South African homes.

The early ’90s was a critical time for the future of broadcasting in South Africa. In 1990 we had just organised the first ever march on the SABC, calling for the democratisation of the airwaves under the banner ‘The People Shall Broadcast’. We were also protesting against the then chairman of the SABC, Professor Christo Viljoen, a leading Broederbonder, who had been appointed by the apartheid regime to head up a task group to review the future regulation of broadcasting.

After tightly controlling the SABC for most of its history, all of a sudden, when facing the loss of political power, the regime wanted “to depoliticise broadcasting” and was planning to restructure the SABC, privatise many of its services – three years before democracy.

Given the importance of the gathering in Holland, Professor Viljoen flew out to Holland to meet the group of 50 Jabulani attendees and face the music, and to face Solly.

Solly was appointed by the conference to head the panel to question Professor Viljoen. Or should I say grill and deep fry Professor Viljoen. With one of the sharpest tongues in the business, an unrelenting, insistent, intellectual and analytical mind, Solly dismantled the legitimacy of the task group that De Klerk had unilaterally appointed in the middle of the negotiations process.

But apart from the legitimacy issues, Solly was also was keen to understand what Viljoen and the government’s plans were. Looking back at the official conference document, Solly asked questions that even back in 1991, remained pertinent for many years: How would the SABC Board, its chairman and GCEO be appointed? Who would the SABC be responsible to – would it be a Minister, Parliament and ICASA? How would the SABC be funded?

Anyway, the rest is history. Jabulani agreed a charter for the future regulation of broadcasting and the SABC, an independent SABC board was appointed in 1993 and soon thereafter Solly began his career in public broadcasting at the SABC.

We all went our different ways, some to the SABC, to the IBA, to ICASA, to the DoC and many into the embryonic private and community broadcasting sectors that resulted. Bush Radio being formed in 1992. Our paths next crossed in 2004 when I was at ICASA and Solly was a senior manager at the SABC, part of a formidable team under then GCEO Peter Matlare.

ICASA had the unenviable task of separately licencing all SABC channels and radio stations properly for the first time, and it took 18 months, in public hearings across the country. I guess I only remember the good parts now – my brain has done such a quality editing job. It was a formidably complex and long process but made a lot easier by the quality of the SABC executive team of which Solly was leading and highly vocal part.

Solly may have been an SABC senior manager, an SABC COO and finally the GCEO of this place but apart from being a leading executive, in my view he remained a broadcaster at heart, a communicator of note, a public servant of the people of South Africa.

Freedom for all radio

Solly went from “This is Radio Freedom” to “This is Freedom for all Radio”. And was one of the founding fathers of the most vibrant, freest broadcasting industries on the continent. He went from understanding the different role of Radio Freedom in the struggle for liberation of South Africa to helping shape the role of the public broadcaster in a developmental state.

After broadcasting INTO South Africa from Ethiopia, from Madagascar, from Angola and Tanzania, Solly soon became responsible for a broadcasting organisation that would broadcast FROM South Africa to the rest of Africa and beyond.

On behalf of the SABC Board, management and all staff, I would like to thank him deeply for his contribution to shaping this organisation and the industry at large.

His role shall never be forgotten, and he will be deeply missed.

Deepest condolences to his family and friends

Michael Markovitz was appointed to the SABC Board in 2017 for a five-year term. He has over two decades of experience as an executive and consultant in the media, technology and entertainment sectors. He helped draft South Africa’s new broadcasting legislation in 1993 and has worked as advisor to the ICASA Chairperson and as an executive at Primedia. Markovitz is currently a member of the Digital Migration Advisory Council, appointed by the Minister of Communications in July 2018.