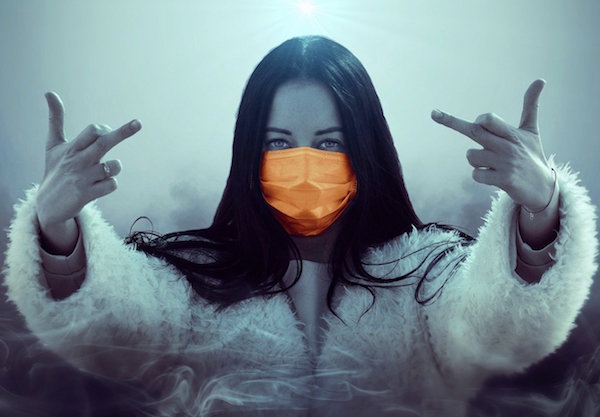 So, besides acting as a physical barrier to protect you from potentially harmful and dirty things floating around in the air, I’ve identified five other really cool advantages of wearing a face mask.

In fact, after reading this, you might even choose to wear a face mask forever.

Spinach without the stress

You are now able to eat as much spinach as you like, whenever you like, and never, ever have to worry if any of it is stuck in your teeth. The same goes for ground black pepper, popcorn, spare ribs, peanut butter on toast and sunflower seeds. Let that stuff sit there all day if it wants to. Deal with it when you get home. You’re worth it.

This takes some getting used to as you constantly need to remind yourself that nobody can actually see what you’re doing with your mouth. You could even stick your tongue out at people and they’ll never know. You might need to practice alone at home in front of the mirror just to build up your confidence. The trick is to make sure your eyes are smiling while you do it.

Next time you’re standing next to someone who has a subtropical ecosystem thriving under their gums, you won’t even know it. No need to slowly back away while your life flashes before you, holding your breath and starving your body of vital oxygen. Breathe in and out as per normal and you won’t even know the difference. In fact, I could have bad breath writing this and you’ll never know because you’re wearing your mask, aren’t you?

All grow, no show

How often do you actually move the big rug at home and vacuum under it? Hardly ever because it’s there to cover the dirt. Guys, if your mask is big enough, there’s no need to shave and keep the facial hair looking neat and tidy. Do you think women shave their legs in winter? Speaking of whom, women, no need to wax that upper lip. Keep the rug over it for now. You’re busy saving lives.

Away with the awkward

Things can get really uncomfortable when you haven’t seen someone in a while, and you lean in for the hug, but they swoop in for one of those wafty kisses that wave past your ear, but because you’ve launched in for the big body embrace, their attempt at a side-swipe kiss ends up smashing you on your ear lobe and they bite open their bottom lip, bleeding all over their chin, while you’re there with your arms wrapped around nothing. It’s then usually awkward for even longer than that sentence you just read. Say goodbye to embarrassing hellos. A simple nod and a point at the mask and everyone knows what’s going on.

Rory Petzer is an executive producer, comedian, content creator, copywriter and campaign strategist. Petzer currently produces the East Coast Drive show on East Coast Radio. He is one part highly organised, forward-thinking ideator and one part restless creative, and it’s when these two meet that the magic happens. Follow him @RoryPetzer