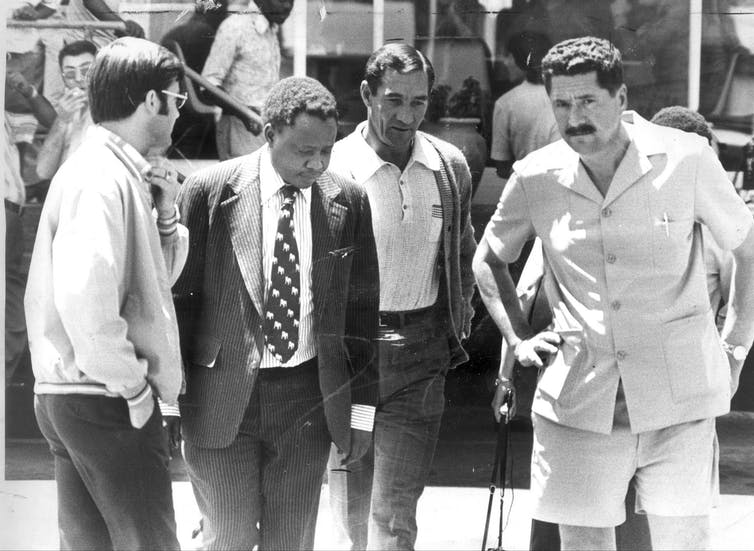 Percy Qoboza, editor of The World, second from left, being arrested by apartheid police following the banning of the newspaper in 1977/ Arena Holdings Archives

Media Freedom Day in South Africa marks the anniversary of a brutal crackdown by the apartheid state on the media and the Black Consciousness Movement.

The 1977 killing of Black Consciousness icon Steve Biko in police custody drew widespread rage and the state responded by closing newspapers, banning organisations and detaining journalists and activists. That was on October 19 of that year, which became known as Black Wednesday.

Since then, South African journalists have used Black Wednesday to draw attention to the importance of media freedom. As the country and the world changed around them, they have highlighted the enduring importance of that most basic of rights: the citizen’s right to information.

Over the years, the nature of the threats to media freedom has changed. The possibility of naked state repression has receded, at least in South Africa. The recent arrest of Hopewell Chin’ono in Zimbabwe is a stark reminder that journalists in other countries are not as fortunate.

But other threats have emerged, some from unexpected directions.

This year, the implications of the Covid-19 pandemic are top of mind, and the media have been among the sectors profoundly affected. A new global study by the International Center for Journalists shows the extent of the damage: media organisations have suffered extensive revenue losses, and journalists have felt the physical and emotional strain of reporting a health crisis that endangers them too.

South Africa has seen all of these impacts, which affect journalists’ ability to do their work and thereby harm media freedom. The new State of the Newsroom report by Wits Journalism, about to be released, will chart the closures, job losses and other devastation suffered in the media.

In many ways the Covid-19 crisis has merely exacerbated trends that have long been visible. The traditional media business model was in terminal decline long before the first case of Covid-19 was diagnosed in Wuhan, China in November 2019. As audiences find it easier to get information online, advertising money has moved from newspapers and other legacy media to the giant platforms like Facebook and Google. Studies like the 2018 Rhodes University report Paying the Piper have shown how media sustainability affects the quality of journalism.

On the positive side, the International Center for Journalists report has found increased levels of trust in journalism since the start of the crisis. Similar findings emerge in the Reuters Institute’s Digital News Report. It found that people around the world have relatively high levels of trusts in media coverage of Covid-19 – more than twice as high as for social networks, video platforms or messaging services.

This is welcome news, as these have become the purveyors of misinformation and disinformation – often called fake news. Difficulties in differentiating between reliable and unreliable information online has certainly contributed significantly to the general decline in public trust in journalism.

This is perhaps the most profound threat to media freedom that journalism faces. The relationship of trust between the news media and their audiences is central to the very idea of journalism: there really is little value to reporting that is disbelieved.

Unfortunately, journalists have scored too many own goals.

Veteran journalist Anton Harber’s new book, So, For the Record: Behind the Headlines in an Era of State Capture, unpacks in great detail how a combination of factors led the Sunday Times, the country’s largest newspaper, to publish a series of stories that he describes as

These included extensive reporting that the South African Revenue Service was running a “rogue unit”, which the paper later retracted. The factors included manipulation by elements of the state security apparatus, a newsroom denuded of skills because of business pressures and an arrogant newsroom culture that refused to admit mistakes.

Harber also describes the fascinating backstory behind the Guptaleaks, in which a trove of emails provided unanswerable evidence of state capture under the administration of former president Jacob Zuma. This was undoubtedly a high point of South African journalism.

More recently, there have been other missteps that damage audience trust. The brief flurry of speculation about the possible arrest of African National Congress secretary general Ace Magashule on corruption charges was seen as a manoeuvre by Magashule himself to test the waters and mobilise political support. It seems that governing party factionalists and politicians are still able to find journalists willing to peddle misinformation for political gains.

And there have been other examples, like instances of victims being identified in politically tinged cases of sexual abuse despite clear rules protecting them.

The world has become infinitely more complex for journalists since the 1977 crackdown. They face a collapsing business model that is steadily destroying the capacity of news organisations to do thorough work and a torrent of weaponised misinformation, working together to undermine public trust.

These are the new threats to journalism and to media freedom. In response, practitioners need to focus on their relationship with audiences. In his book Can You Trust the Media?, journalism professor Charlie Beckett writes:

Trust is a relationship, not a fact.

More than anything, journalists need to hold firmly to the ethical standards that tell audiences their work is reliable and credible. This is what will ensure trustworthy journalism stands out from the noise around it.